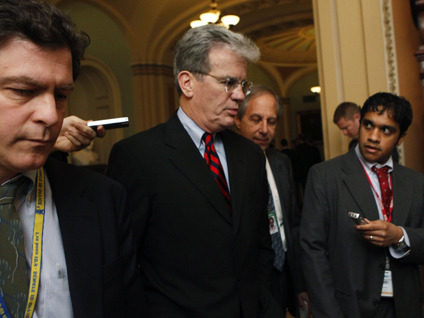 Republicans on Tuesday rolled out all of the obstructionist tactics they promised as the Senate kicked off its final health care showdown, beginning 20 hours of debate on the reconciliation bill meant to amend the comprehensive legislation signed into law on Tuesday. GOP tactics to stall the measure included introducing headline-grabbing amendments to the bill (like a proposal to prohibit Viagra coverage for sex offenders), and blocking Senate business on issues unrelated to health care.

Even as the GOP pulls out all the stops, Democratic leadership says they hope to finish debate on the reconciliation "fix it" bill as early as Thursday night, the Washington Post reports. Under the rules of reconciliation, which allows a bill to be passed with just 51 votes, the Senate debates for 20 hours. At the end of the debate, the Senate goes into "vote-a-rama," a rapid-fire voting session on all of the amendments up for discussion. After already slogging through more than seven hours of debate on Tuesday, "vote-a-rama" could begin as early as tonight.

Republicans unveiled their strategy of introducing amendments that would be difficult for Democrats to vote against, raising the ire of the majority party. For instance, one of the nine amendments introduced by Sen. Tom Coburn (R-Okla.) is entitled "No Erectile Dysfunction Drugs To Sex Offenders." Sen. John McCain (R-Ariz.), meanwhile, introduced an amendment to erase "sweetheart" deals from the health care legislation. The reconciliation bill already rolls back some, but not all, of the so-called "special deals" in President Obama's new law.

Democratic Sen. Mary Landrieu of Louisiana -- herself the target of scrutiny for securing a so-called "sweetheart deal" for her state -- blasted McCain's amendment as purely political, the Hill reports. She reportedly called the amendment "for television or the Internet... not for any serious debate."

"It is beneath the senator from Arizona, who at one time was a candidate for president of this country," Landrieu said. "Normally the only time I see the word 'sweetheart' is when my husband sends me a dozen roses on Valentine's Day... To actually draft an amendment like this that uses the words 'sweetheart deal' is really an insult to the people of our country, and I would expect more from him."

A number of pro-reform groups, including Health Care for American Now, Families USA and the labor federation AFL-CIO, are urging Democrats to vote against all amendments -- even proposals they would normally support -- so that the reconciliation bill can pass swiftly. If any amendments are passed, the reconciliation bill will be sent back to the House for yet another vote.

Meanwhile, as the reconciliation debate began yesterday, three different Senate committees were about to hold hearings: one on a national broadband plan, a hearing on federal financial management and an environmental hearing. All of those were abruptly canceled, however, because of GOP obstruction.

There is an obscure Senate rule that says the Senate cannot conduct hearings after 2 p.m. without unanimous consent, so Republicans opted to withhold their consent, the Hill reports.

Washington Unplugged: Stupak Says "It Was Worth It"

As the reconciliation debate continues today, Mr. Obama will quietly sign an executive order extending already-existing restrictions on taxpayer funding of abortion to the health care legislation. While yesterday's bill signing was a high profile event, today's signing will be closed to the press. Rep. Bart Stupak (D-Mich.), who led the push for stringent abortion coverage restrictions in the health care bill, will attend the signing along with about a dozen other anti-abortion rights legislators.

Mr. Obama's success in passing the health care bill may have already boosted public support for the measure. A CBS News poll conducted just before the House approved the legislation on Sunday showed that nearly half of all Americans disapproved of the health care bill. However, a new CBS News poll released this morning showed a bump in support, from 37 percent to 42 percent. But more (46 percent) still disapproved of the new law.

A USA Today/ Gallup poll conducted the day after the bill was passed showed even more of a boost for Mr. Obama and Democrats, with 49 percent of Americans calling the bill a "good thing."

UPDATE: Republicans for the second day blocked some Senate committee hearings to protest the reconciliation bill, the Hill reports. While some hearings, including one in the Homeland Security Committee, proceeded today, the GOP blocked hearings in the Senate Armed Services Committee and the Judiciary Committee.

"They're only concern is putting roadblocks and doing everything they can do to keep us from improving health care for Americans. It sounds harsh, but that's what they're doing," Reid reportedly said. "How serious could the be, offering an amendment dealing with Viagra for rapists?"

UPDATE, 5:25 p.m.: The Senate concluded debate on the reconciliation bill just after 5 p.m. today, beginning the phase of voting on amendments known as "vote-a-rama," CBS News Capitol Hill Producer John Nolen reports. The Senate will vote on a series of 23 amendments, and each vote is expected to take 15 to 20 minutes.