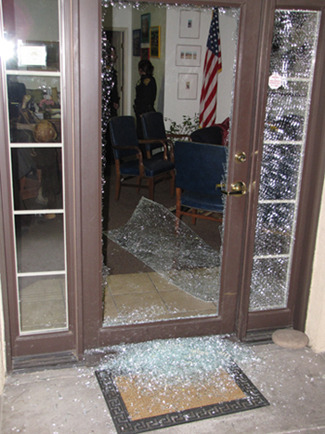 In the wake of his vote in favor of health care reform legislation, Rep. Bart Stupak (D-Mich.), a strong opponent of abortion rights, has been on the receiving end of a string of extremely hostile and threatening messages, including death threats.

Stupak's office released some of those messages to CBS News, and you can listen to them in the video at left, which is also available here.

House Majority Leader Steny Hoyer said today that more than 10 members of Congress have received threats in the wake of the health reform vote, and the FBI and police are investigating, CBS News Capitol Hill Producer Jill Jackson reports. The chief of the Capitol Police, the Sergeant at Arms and a representative from the FBI met with members this afternoon to encourage them to report all threats.

While the Capitol Police is in charge of security for members of Congress, the FBI is the lead agency in investigating threats against members and their families.

"All threats and incidents directed against Members of Congress are taken seriously and are being investigated by the FBI, U.S. Capitol Police and other law enforcement agencies to identify and bring to justice those responsible," FBI Public Information Officer Katherine Schweit said in a statement. "Anyone with information about those who may be responsible or are connected to these incidents should contact their local FBI office or police department."

The calls placed to Stupak's office reveal the extreme anger members of Congress are facing.

"Congressman Stupak, you baby-killing mother f***er... I hope you bleed out your a**, got cancer and die, you mother f***er," one man says in a message to Stupak.

"There are millions of people across the country who wish you ill," a woman says in a voicemail, "and all of those thoughts that are projected on you will materialize into something that's not very good for you."

CBS News also obtained copies of faxes sent to Stupak, which include racial epithets used in reference to President Obama and show pictures of nooses with Stupak's name.

When the House was first considering health care legislation, Stupak led the fight to insert stringent abortion coverage restrictions into the Democrats' health care bill in the House. Last week, however, he agreed to support the Senate version of the bill, despite his objections to its language on abortion.

Stupak negotiated with Democratic leaders over the abortion language until the eleventh hour, finally agreeing to support the legislation when President Obama agreed to sign an executive order reaffirming the existing ban on federal dollars being spent on abortion.

Anti-abortion rights activists and Republicans said an executive order was not good enough since it can easily be reversed. Democrats, by contrast, maintain that the original Senate language did not allow taxpayer money to go to abortion.

Rep. Louise Slaughter (D-N.Y.) said that the windows of her Niagara Falls office were broken, and she received a voicemail referencing snipers, CBS News' Jill Jackson reports. The police, FBI and Capitol Police are all investigating the incident.

Slaughter released a statement condemning Republicans for encouraging activity that has "coarsened the debate, inflamed tensions and contributed to an increase in incivility."

"Michael Steele, the head of the national Republican party, said that Speaker Nancy Pelosi should be put on 'the firing line,'" Slaughter said. "Sarah Palin said 'don't retreat - reload.' And House Minority Leader John Boehner said that a Democratic member of Congress who supported health care reform would be a 'dead man.'"

Rep. Gabrielle Giffords (D-Ariz.) said the front door of her Tucson office was shattered around 2 a.m. Monday morning. Her spokesman, C.J. Karamargin, said that staffers on Monday were "kind of shaken up." Karamargin said the vandalism was most likely carried out with a pellet gun, since the door was behind a locked fence that would be difficult to climb over.

"We're going to have a big problem in our country if we can't have a healthy debate," she said.

House Republican Leader John Boehner responded to the incidents today on Fox News, saying the GOP does not encourage that type of behavior.

"There are a lot of angry Americans, and they are angry over this health care bill," Boehner said. "They're angry about the fact that the Democrats here in Washington aren't listening to them. But I've got to tell you that violence and threats are unacceptable. It is not the American way."

Stupak was the apparent target a controversial remark made on the House floor by a Republican congressman during Sunday's health care vote. Rep. Randy Neugebauer (R-Texas) shouted "baby killer" while Stupak was speaking on the floor, though Neugebauer denies he was directly addressing Stupak. He said he was referring to the bill more broadly.

Stupak, a former police officer, told Politico that he is not fazed by the threats he has received from the public.

Reps. Steve Driehaus (D-Ohio), Earl Pomeroy (D-N.D.) and Dennis Cardoza (D-Calif.) have also all been on the receiving end of hostile or threatening messages, Politico reports.

Rep. Tom Perriello (D-Va.)'s brother also may have become a target when a Tea Party blogger posted his brother's home address online, believing it was the congressman's address.

Yesterday, Perriello's brother came home and found someone had severed a gas line to a propane tank that was connected to a gas grill on his back porch, CBS News confirms. The FBI and the Albemarle County Fire Marshal are both investigating the matter.

"My number one priority right now is ensuring the safety of my brother's family, and I am grateful to law enforcement for their excellent work," Perriello said in a statement today. "While it is too early to say anything definitive regarding political motivations behind this act, it's never too early for political leaders to condemn threats of violence, particularly as threats to other Members of Congress and their children escalate."

At least one congressman, Rep. Barney Frank (D-Mass.) is trying to use the hostile incidents to rally his supporters. Anti-reform protesters yelled gay slurs at the openly-gay congressman last weekend, as well as racial slurs at some black members of Congress.

Frank sent an e-mail today designed to spur fundraising from those incidents. "The ugliness in Washington last weekend, which I and others experienced personally, has raised the stakes for the November elections," the e-mail read. "We are not only fighting for health care, financial reform and the other critical legislation, we are fighting to repudiate the notion that mob tactics will succeed."