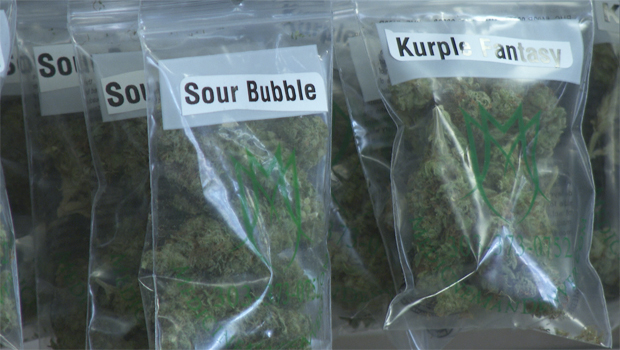 You might say that in Colorado, state law has caught up with the song, "Rocky Mountain High." Our Cover Story is reported now by Barry Petersen:

Here's a scene you don't see very often: a fundraiser for a symphony that's a "BYOP" evening . . . as in, bring your own pot.

And how about this: friends getting together after work not just for drinks, but for pot and munchies.

In most places in the U.S., parties like these would be illegal. But we're in Colorado, the first state in the nation to legalize sales of marijuana for recreational use.

There were parties all over Denver when the law allowing recreational pot passed in 2012, and lines stretched around the block on January 1, the first day of sales. Business has been booming ever since.

Tourists have been flocking to the state -- an estimated 80,000 people were at a massive marijuana celebration in April. And believe it or not, there are now more pot shops in Denver than there are Starbucks.

But not everyone was eager to jump on the marijuana bandwagon, including the state's Democratic Governor John Hickenlooper.

"I opposed legalizing marijuana in Colorado," he said. "I didn't want to be the first. I would've much rather done it as a nation, right, together. But we're involved -- whether we like it or not -- in one of the great social experiments of the 21st century of how do we make this thing work."

This great new experiment has deep roots in history. For centuries marijuana was used as a medicine; Queen Victoria' s doctor prescribed it to ease her menstrual cramps.

But it was virtually unknown in the U.S. until the early part of the 20th century.

"The only people that anyone knew in this country that smoked marijuana during the early years were either Mexican-American migrant workers or jazz musicians," said Keith Stroup, founder of the National Organization for Reform of Marijuana Laws (NORML).

"In fact, there was enormous racial prejudice at the time, and some of our early government officials took advantage of that by running 'reefer madness' campaigns to convince the rest of us that it was really a killer drug, that if you smoked marijuana, you would commit violent acts, you would end up going insane."

Marijuana was outlawed by the federal government in 1937. Then in 1970, it was classified as what's called a Schedule 1 narcotic. To this day, it's in the same class as heroin; that means using, selling or even just possessing marijuana can carry harsh penalties.

Stroup has spent his career trying to change that.

In 1996, largely due to lobbying by his group, California became the first state to allow marijuana sales for medical use. Since then, 21 other states and the District of Columbia have passed laws allowing marijuana for patients with illnesses like cancer, AIDS and epilepsy.

"And now, three or four or five major polls, including Gallup, shows 58 percent of the public now support the legalization of marijuana regardless of why you use it," said Stroup.

In Colorado, even the formerly skeptical governor says his initial fears are being balanced in part by benefits.

"If people didn't smoke before, generally they're not smoking now," said Hickenlooper. "So we haven't seen a giant increase in the number of people smoking marijuana, assuming that they're giving honest answers to polls. So generally the people that were smoking are still smoking, and now they're paying taxes. And that money, instead of going off to sometimes to our enemies, foreign countries, drug dealers, whatever, that money's now staying in Colorado and creating jobs and generating taxes."

In just the first three months of this year, the state collected more than $7 million in taxes on recreational sales.

But here's the rub: marijuana is still illegal under federal law. So while pot has come out of the closet, pot money can't find its way into the federal banking system.

That means growers and sellers are forced to deal almost exclusively in cash. They have to hire armed guards to protect tens of thousands of dollars. They even have to take bags full of cash to pay their state taxes.

Sally Vander Veer runs Medicine Man, a thriving marijuana business: "It's very scary for me, as a person who manages the money. But also it's a public health risk. We have to pay our employees in cash at times. So they have cash in their pockets. There's a lot of cash being thrown around Colorado."

Gov. Hickenlooper just signed legislation that will set up an in-state credit union for marijuana money. But it's unlikely to fix the problem any time soon.

Despite the challenges, legalization is gaining momentum. Washington made recreational pot legal at the same time as Colorado, and sales will begin there this summer. Alaska will vote this November, and maybe Oregon, where a petition drive is now underway.

As states experiment, the Obama administration has taken a look-the-other-way approach, but in a couple of years, a new president may not.

"You could have a new administration come in and they could easily try to close down the commercial businesses," said Beau Kilmer of the Rand Corporation, which tracks marijuana trends. "That's not hard; we have their addresses."

It's possible, says Kilmer, that the federal government could do a 180 under a different administration and say to Colorado, "Close the stores, or we'll come in and close them for you."

But for now, marijuana use at gatherings in Colorado is a choice instead of a crime.

And the man who opposed legalization, Gov. Hickenlooper, now sees that his state may change minds ever so slowly across America.

"This didn't pass by just 1 or 2 percent, right? It passed by more than 10 percent," Hickenlooper said.

"It got more votes than President Obama in that election," said Petersen.

"It sure did! And I think if we do our job properly, then I think other states will follow, and I think we might 10 years, 20 years down the road see a point where the country is much more tolerant as a nation."