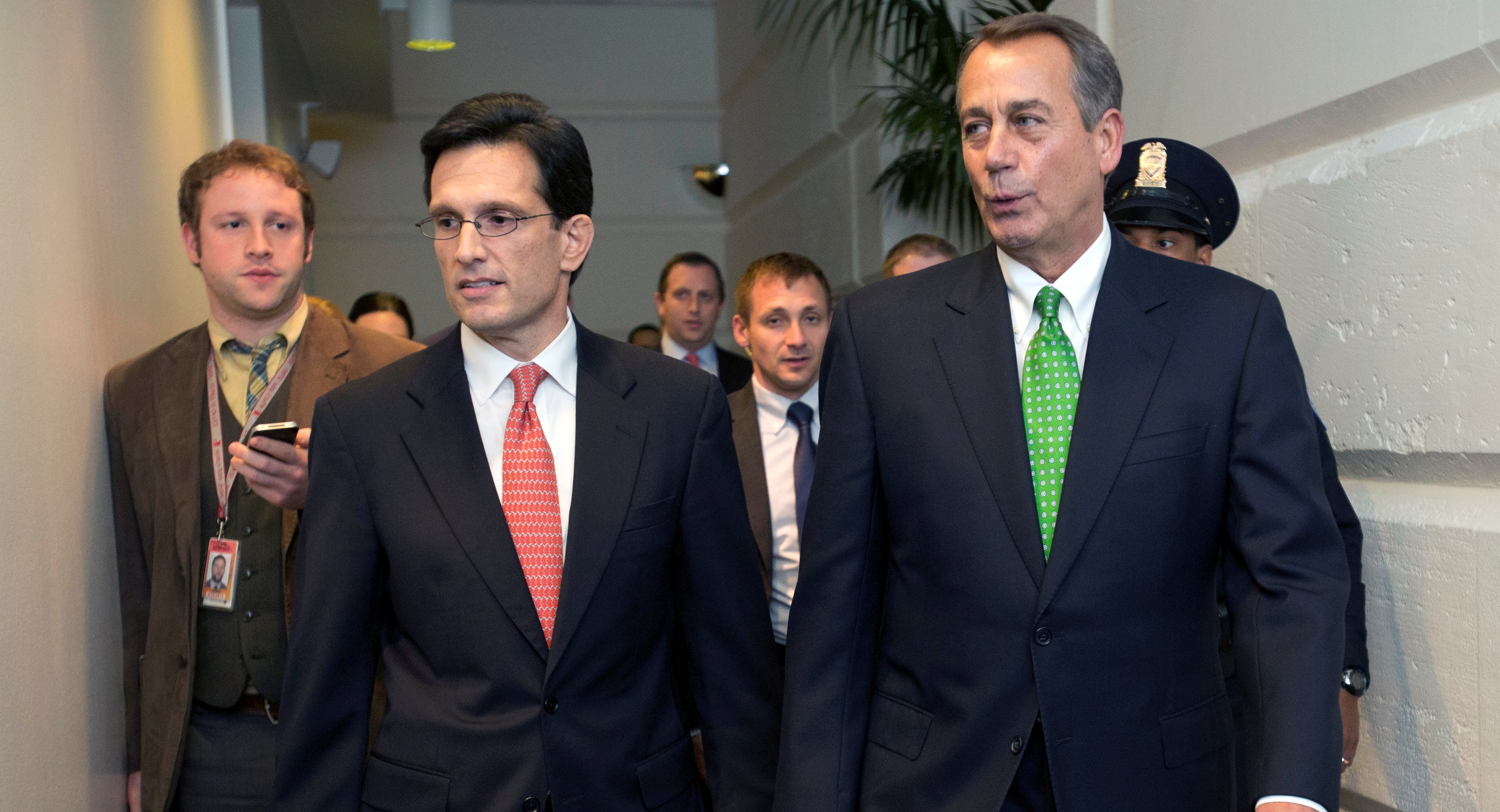 The House will hold a straight vote on the "fiscal cliff" bill passed by the Senate overnight - a major step in finally averting several effects of the "cliff."

If the bill passes the House, it moves on to President Obama for his signature, ending weeks of fighting about how to deal with the tax hikes and spending cuts that began hitting the country today.

It wasn't easy getting to this point today in the House. After meeting with the Republican conference and listening to members' concerns, House Speaker John Boehner presented them with two options, a GOP leadership aide said: The first option would be to offer an amendment to the Senate bill that would add a $323 billion package of spending cuts. If GOP leaders couldn't muster enough support for the amendment idea, the second option would be to vote on the Senate bill as-is.

As it turned out, House Republican leadership scuttled the amendment idea and announced they would vote on an unamended version of the Senate bill.

Earlier in the day, House Majority Leader Eric Cantor, the No. 2 Republican in the House, declared his opposition to the Senate-passed "fiscal cliff" deal, threatening to put the deal in peril.

"I do not support the bill," Cantor said walking out of a conference meeting in which House Republicans discussed the "fiscal cliff" deal passed in the Senate overnight.

A number of other House Republicans today expressed serious concerns about the lack of spending cuts in the Senate bill, CBS News' Jill Jackson reports. Some GOP members said they would vote against the deal for that reason. The nonpartisan Congressional Budget Office released a report today estimating that the Senate bill would add $329 billion to deficits in 2013 and $3.9 trillion to deficits over the next 10 years, relative to current law.

Boehner spokesman Brendan Buck said after today's first conference meeting that the lack of spending cuts in the Senate bill "was a universal concern amongst members."

"The Speaker and Leader laid out options to the members and listened to feedback," Buck said. "Conversations with members will continue throughout the afternoon on the path forward."

Rep. Nan Hayworth, R-N.Y., said on her way out of the afternoon meeting, "What we want is to do what's best for the American people. When you talk about balance, you've got to provide responsible spending restraint for the long term. This bill doesn't have that."

Other Republicans today said they would vote for the Senate bill because it represents the best deal possible and takes the president's best leverage -- taxes -- off the table. It locks in the Bush-era tax rates for more than 98 percent of Americans and sets the stage for a major negotiation over spending cuts in the next two months.

Lawmakers had hoped to resolve any uncertainty over the so-called "fiscal cliff" before financial markets reopen Wednesday, but Cantor's opposition puts the fate of the deal in doubt. As of Tuesday afternoon, it was unclear when the House would vote on the Senate bill.

"We're waiting here on the House doing something finally on the cliff, we hope," Senate Majority Leader Harry Reid, D-Nev., said in a brief appearance on the Senate floor today.

Congress needs to finish work on this bill by Noon on Jan. 3 -- at that point, the government technically transitions to the 113th session of Congress, wiping clean the legislative slate.

House Democrats were adamant today that House GOP leaders should hold an up-or-down vote on the Senate bill, without amendments.

Holding the up-or-down vote "shouldn't even be a question," House Democratic leader Nancy Pelosi said today. "We were told we would not have any legislation on the floor until and unless the Senate acted and when they did, we would have a vote... We expect -- the American people deserve -- an up-or-down vote on what was passed in the Senate."

The Senate in the early morning hours of the new year passed a bill to let income tax rates rise on income over $400,000 for individuals and $450,000 for couples. The measure also extends unemployment benefits for the long-term jobless, prevents a 27 percent cut in fees for doctors who treat Medicare patients and prevents a spike in milk prices.

However, the Senate bill stalls debate over one important aspect of the "fiscal cliff" for just a matter of weeks. The so-called "sequester" cuts, which amount to $1.2 trillion over 10 years (and about $109 billion this year alone), were set to slap the Pentagon and domestic programs starting this week. The Senate bill allocates $24 billion in spending cuts and new revenues to defer the "sequester" cuts for two months, ensuring Congress would have to debate the issue later this year.

"We're kicking the can down the road," one House Republican, Rep. Darrell Issa of California, said on the House floor today, calling the legislation "the smallest finger in a dike that in fact has hundreds of holes in it."

A number of GOP members told CBS News today they support amending the bill to add more spending cuts and also perhaps to defer the "sequester" cuts for a year instead of just two months.

CBS News Congressional Correspondent Nancy Cordes reports that Democrats expect almost all of their members to vote in favor of the deal, though their caucus is not thrilled with the Senate bill, either. Rep. Gerry Connolly, D-Va., on the House floor today called the expected vote on the measure a "hold-your-nose vote."

Vice President Joe Biden, who brokered the deal with Senate Republican Leader Mitch McConnell, met with House Democrats in a closed-door meeting for about 90 minutes today.

Rep. Earl Blumenauer, D-Ore., told CBS News that Biden pointed out a number of the positive aspects of the legislation. "I mean this is the first broad based tax increase that we've seen in a generation. That's no small consequence," Blumenauer said.

That said, the Democratic congressman said he has serious concerns about the short-term nature of the legislation.

"I would prefer if we weren't acting out this over the course of the next year," he said. "Let's nail it now. We've already gone off the 'cliff.' The question is whether it's going to be one day, two days or whether we're going to institutionalize this for months to come... This gives me pause looking at this squirrel cage we've been in for over two years now."

If Republicans try to amend the Senate bill, Blumenauer warned Congress may not get it to the president's desk before Jan. 3.

"Mercifully, the worst Congress in history perhaps goes out of existence in two days," he said. "If they open this up on the floor and they are starting to amend it... we'll be swearing in the new Congress while they're still acting out that drama."