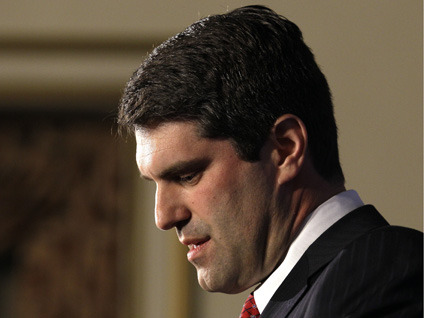 On super primary Tuesday, House Democrats were the only lawmakers in Washington with something to smile about whenDemocrat Mark Critz won a special election in Pennsylvania's 12th district to finish the late-Rep. John Murtha's House term. Critz beat businessman Tim Burns handily 53 percent to 44 percent.

"Mark Critz's victory demonstrates that Democrats can win in a tough political environment," said Speaker Nancy Pelosi's spokesman Brendan Daly. "The Republicans have been boasting that they can win 50 or even 100 House seats, yet they could not win a seat that independent analysts called a 'must win' for them in a district that John McCain won in 2008."

But is it a good indicator of whether Democrats keep the House in November?

When the outcome was still unclear, House majority leader Steny Hoyer was not so sure.

"If he wins will that mean the Democrats are going to sweep? I don't think so," Hoyer said yesterday. "These special elections are, you know, they are what they are."

Republican Whip Eric Cantor said this morning that he thinks Americans still want to vote for some kind of check and balance to Democrat's power in Washington.

Watch CBS News Videos Online
"Obviously, I'm disappointed as a Republican that Tim Burns did not win the seat," Cantor said in an interview for CBSNews.com's "Washington Unplugged." (watch at left)

But the silver lining Cantor sees for Republicans is that Mark Critz ran as a conservative against health care and cap and trade.

"What is pretty indicative was that the Democratic candidate refused to get anywhere near the policy agenda promoted by Speaker Pelosi and President Obama," Cantor said.

That said, Cantor acknowledged that "last night is evidence of the fact that we've got a lot of work to do."

House Republicans need to boot at least 40 Democrats to take past the House.

So what does this mean for House lawmakers going forward?

House Minority leader John Boehner told reporters this morning that Republicans will continue to organize and work with the American people to create a strong Republican platform. House Republicans plan to rollout an interactive project next week that will encourage the public to participate in forming that agenda. Boehner also said it's a money problem.

"We've got to continue to raise resources," he said. "We can't be at a financial disadvantage like we are now."

The latest campaign committee filings with the FEC show that Democrats had $26 million in cash on hand while Republicans reported just under $10 million.

As for House Democrats, Brendan Daly said that they will "continue to make the 2010 elections a choice between Democrats who are fighting for the middle class and Republicans who are siding with Wall Street and other special interests."