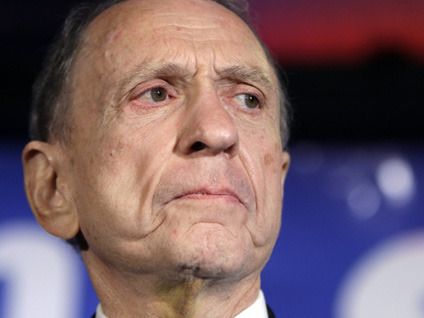 Sestak's victory marks a striking triumph over the establishment candidate, who just last month had a more than 20-point lead in polls.

Joe Sestak: "I Stood Up to My Party"

After serving in the Senate for nearly 30 years as a Republican, Specter switched to the Democratic party in order to salvage his career. He won the support of the Democratic establishment -- including Gov. Ed Rendell and Philadelphia Mayor Michael Nutter, who worked on his behalf to mobilize voters in Philadelphia, a critical part of the state for Specter.

President Obama also supported Specter, but he never joined him on the campaign trail.

While the Democratic establishment worked to elect Specter, Sestak seized on the 80-year-old senator's party switch to portray Specter as self-interested. He ran a bruising political ad that showed Specter with then-President George W. Bush.

Now with Specter out of the picture, the party is switching gears to get behind Sestak. Sen. Robert Menendez, chair of the Democratic Senatorial Campaign Committee, released a statement praising Sestak as "a former Naval Officer who has proven he takes a back seat to nobody when it comes to shaking-up Washington and taking on the establishment."

Specter's loss is the latest sign of an anti-incumbent attitude among voters across the country, as also evidenced by the defeat of Republican Sen. Bob Bennett of Utah and Democratic Rep. Alan Mollohan of West Virginia. Early vote counts indicate Specter did not do well enough in Philadelphia, the AP reports, where he was relying on his Democratic allies to help him build up large vote margins.