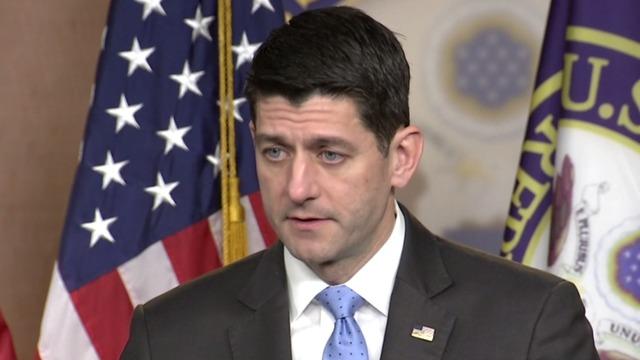 House GOP leaders say the issue at the forefront of the gun debate in the wake of the the most recent deadly mass shooting in Parkland, Florida needs to be the "breakdown" of local and federal law enforcement systems, which failed to prevent the deaths of 17 students at Marjory Stoneman Douglas High School some three weeks ago.

"We need to get to the bottom of this and how these breakdowns occur," said House Speaker Paul Ryan. He said it's something lawmakers are "very troubled" by and will be part of the larger conversation about guns taking place on Capitol Hill.

Ryan said from claims that an armed officer at the school at that time of the shooting did not act to protect students, to the FBI who "failed to follow up on a glaring tip" were "pretty profound" missteps in the system.

Broward Sheriff Scott Israel said that an armed school resource officer assigned to the high school "never went in" while a  gunman opened fire on students with an AR-15 rifle.

House Majority Whip Rep. Steve Scalise said the issue of these system breakdowns was a topic of discussion during his meeting with student survivors from the Florida shooting.

Scalise, who survived a shooting himself back in August, told "CBS This Morning" earlier on Tuesday that serious questions remain for the FBI in light of a tip received about Nikolas Cruz, the suspected Florida school shooter, back in January 2018 that failed to ever be investigated.

"We have some breakdowns at the local and federal law enforcement level. Clearly, a lot of us have serious questions about the FBI and why this wasn't stopped in the first place when they had this kid handed to them on  a silver platter months ago," Scalise told CBS.

Meanwhile, House Majority Leader Kevin McCarthy said while lawmakers continue to learn more about inaction on the part of law enforcement and ignored warning signs, there is an "important debate" taking place on the issue of gun laws.

The lawmakers said the caucus is continuing to push for a stronger national background check database and "looked forward" to the Senate taking up the "Fix NICS" bill.

"We do know there's gaps in background check system that need to be plugged," said Ryan. He added, "But we shouldn't be banning guns for law abiding citizens."

On Monday, during a meeting with the nation's governors at the White House, President Trump told the state leaders that Speaker Ryan and House Majority Leader McCarthy would begin work on "some legislation" along with Sens. John Cornyn and Mitch McConnell.

Mr. Trump has signaled he is open to a variety of approaches to preventing gun violence -- including a bipartisan measure to make the current background check system more robust. He also announced he has directed the Department of Justice to draft regulations that would ban any bump stocks, devices that turn semi-automatic firearms into automatic weapons.

The White House also suggested the president may also be open to addressing an age limit for those who purchase an AR-15, a high-caliber weapon commonly used in shooting tragedies like the one in Parkland.

But it's the president's recent proposal to  arm "gun-adept" teachers that is causing the most controversy among gun control advocates and many state leaders.

Ryan said the issue of arming teachers was a question for local governments and local school boards. But as parent, he said he thought it was a "good idea."

The speaker added that legislation aside, "this speaks to bigger questions of our culture." Ryan said the issues of mental health reform and violence in America's culture are "where we should focus our problems to be solved."