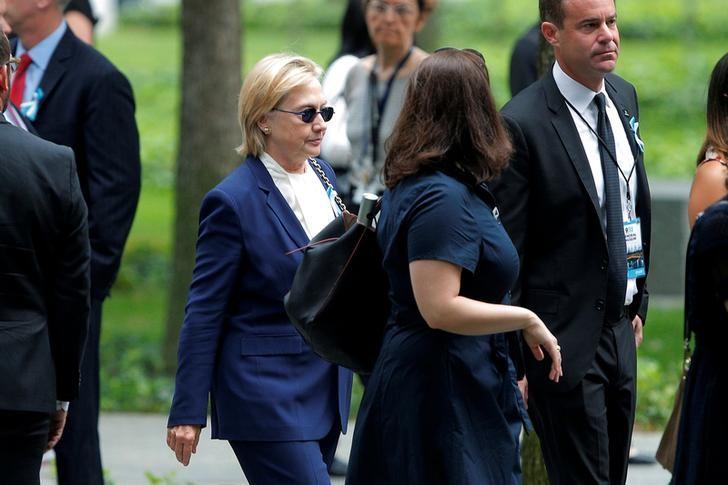 Hillary Clinton’s doctor said in a letter released Wednesday that the Democratic nominee is “healthy and fit to serve as President of the United States,” characterizing her pneumonia diagnosis as “mild” and “non-contagious.”

The new information on Clinton came from her physician, Dr. Lisa Bardack, who both wrote the letter about her health last year and was the doctor who diagnosed Clinton with pneumonia on Friday. The release also included a one-page letter pronouncing vice presidential nominee Tim Kaine “in overall excellent health” from Dr. Brian P. Monahan, the attending physician in Congress.

The new information from Bardack, Clinton’s doctor, further addressed her pneumonia diagnosis from last week. Bardack said in the letter that she’s examined Clinton multiple times since then, as recently as Wednesday.

Clinton’s health has been front and center since Sunday, when she abruptly left a 9/11 memorial ceremony in New York after feeling “overheated” and “dizzy.” Clinton went to her daughter’s apartment in Manhattan to recover before returning home to Chappaqua, N.Y.; later that evening, her campaign revealed that she had been diagnosed with pneumonia the preceding Friday.

“I’m reassured by this—boy, it’s nice to have information isn’t it?” CBS News’ Chief Medical Correspondent Dr. Jon LaPook told CBSN Wednesday evening. “A bunch of the questions that I had had were, for example, how do we know she had pneumonia? Well now we know, she had a CAT scan. What was the size of the pneumonia? It was felt to be a small, right middle-lobe pneumonia, so that’s much better than if a lot of the lung was involved.”

According to Bardack’s letter, she saw Clinton on Sept. 2 for a low-grade fever, congestion and fatigue. Bardack advised rest; Clinton continued her campaign trail travel, and a week later—last Friday—she saw Bardack again when her symptoms had worsened.

On Friday, Clinton underwent a non-contrast chest CT scan, which showed a “a small right middlelobe pneumonia,” according to Bardack, which she characterized as a “mild, non-contagious bacterial pneumonia. Clinton was treated with Levaquin, which she was advised to take for 10 days.

In addition to her pneumonia diagnosis, Clinton has been treated this year for a sinus and ear infection she developed in January. In order to drain fluid from her left ear and relieve her symptoms, Clinton had a myringotomy tube placed in her ear in January by an ear, nose and throat (ENT) doctor; her symptoms have since abated, according to Bardack.

“Further follow-up evaluation with a CT scan of her brain and sinuses was done in March of 2016,” Bardack wrote. “This scan showed no abnormalities of the brain and mild chronic sinusitis. Her symptoms resolved and she continued symptom-free for the next six months.”

Bardack’s letter included an updated list of Clinton’s medications, which include Levaquin, Armor Thyroid, Coumadin, Clarinex and B-12 as needed. Her vaccinations are up to date, and she has had a normal mammogram and breast ultrasound. Clinton’s blood pressure at her last examination was 100/70 and her temperature was 97.8 degrees.

“My overall impression is that Mrs. Clinton has remained healthy and has not developed new medical conditions this year other than a sinus and ear infection and her recently diagnosed pneumonia,” Bardack wrote. “She is recovering well with antibiotics and rest. She continues to remain healthy and fit to serve as President of the United States.”

As for Kaine, Dr. Monahan pronounced him in “overall excellent health”—his only recommendation was that the vice-presidential candidate add a daily vitamin D supplement to his diet.

According to Monahan, who last examined Kaine for a full physical in February, the candidate’s lab and blood work all came back normal; he had an echocardiogram done in March to check a “left atrial enlargement” in his heart, but the results indicated “structurally normal heart valves without evidence of valve malfunction.” Kaine takes no medications and has no drug allergies; he has no history of tobacco use and his use of alcohol is “modest.”

Here’s the full text of the letter from Bardack: