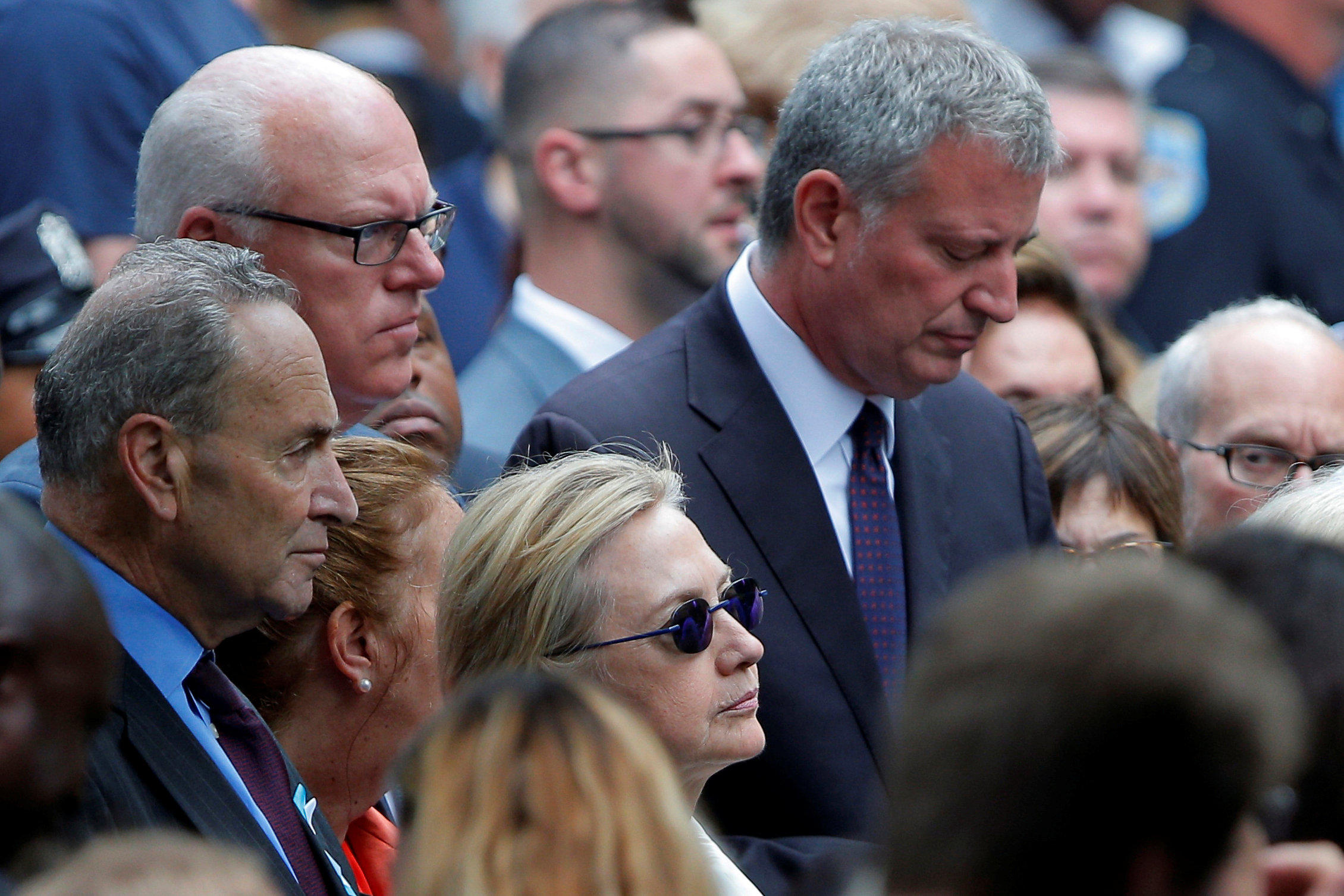 “Secretary Clinton attended the September 11th Commemoration Ceremony for just an hour and thirty minutes this morning to pay her respects and greet some of the families of the fallen,” Clinton campaign spokesperson Nick Merrill said in a statement Sunday morning. “During the ceremony, she felt overheated so departed to go to her daughter’s apartment, and is feeling much better.”

Clinton arrived at the Sept. 11 memorial in Manhattan at about 8:19 AM, where she chatted with Democratic Sens. Chuck Schumer and Kristen Gillibrand of New York and Joe Manchin of West Virginia. Clinton was expected to stay for most of the ceremony’s duration.

Later, the candidate walked away from the area with Secret Service agents in tow at approximately 9:30 AM, before the end of the memorial service, according to pool reports.

Below is unconfirmed footage of Clinton exiting the 9/11 memorial ceremony:

Clinton arrived at her daughter’s apartment some time later and departed shortly after.

As the Democratic nominee left the building, one reporter asked if she was feeling better. Clinton responded: “Yes, thank you very much.”

She went on to say that she felt “great” and that “it’s a beautiful day in New York.”

The temperature in New York City on Sunday was in the lower 80s, with moderate to high humidity.

Clinton left for her home in Chappaqua, New York soon after leaving her daughter’s apartment where, according to a Clinton campaign aide, the Democratic nominee was examined by her doctor, Dr. Lisa Bardack.

Bardack released a statement Sunday afternoon about the examination, saying Clinton was “recovering nicely” after becoming “overheated and dehydrated” earlier in the day. Bardack also noted that the candidate had been diagnosed with pneumonia Friday.

“Secretary Clinton has been experiencing a cough related to allergies. On Friday, during follow up evaluation of her prolonged cough, she was diagnosed with pneumonia. She was put on antibiotics, and advised to rest and modify her schedule,” the doctor wrote in the statement. “While at this morning’s event, she became overheated and dehydrated. I have just examined her and she is now re-hydrated and recovering nicely.”

The incident raises further questions about the health and public records of Clinton and Republican presidential nominee Donald Trump.

Both have released doctors’ summary notes of their health records, and Clinton has previously slammed continued speculation over her failing health, saying last month that it “absolutely makes no sense.”

Last week, when ABC News asked Clinton if the American public deserved to hear more about their medical histories, Clinton seemed to dismiss the need.

“Let me say that what we have released is commensurate with what others who have been nominated for president have released. And we followed closely what the format was. We put out the information,” she said at the time.

The two candidates have indeed followed precedent when it comes to publicizing a doctor’s summary of their medical documents. John McCain is the only recent major party nominee to have broken the tradition, allowing a small group of reporters to scrutinize over 1,100 pages of his medical records during the 2008 presidential election. John Kerry, the Democrats’ 2004 presidential nominee, also permitted reporters to look at his 36-page military medical records for a brief 30 minutes.

For his part, Trump -- in a separate interview last week with ABC -- challenged Clinton to widely release her medical records.

When pressed on if he would make the documents public first, Trump replied: “I might do that. In fact, now that you ask, I will do that.”

Trump was also in attendance at the memorial ceremony and left the service before it ended. Asked after the event about Clinton’s health incident, the Associated Press reports Trump said, “I don’t know anything about it.”