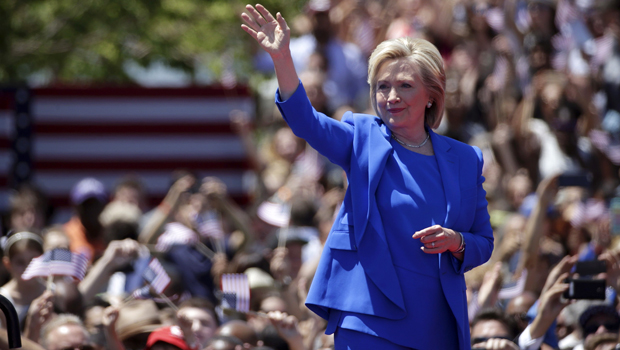 Democratic presidential candidate Hillary Clinton officially launched her 2016 campaign in New York Saturday, laying out a populist policy agenda that she said would fight "for all Americans."

"I'm running to make our economy work for you and for every American," Clinton told supporters at a midday rally on New York's Roosevelt Island. "I'm not running for some Americans, but for all Americans."

Standing atop a stage shaped in the likeness of her campaign logo -- a large "H" with an arrow pointing right -- Clinton cited "America's basic bargain" as a guiding principle of her campaign and her personal life: "If you do your part, you ought to be able to get ahead."

Clinton spoke of her mother, who "taught me that everybody needs a chance and a champion."

"She knew what it was like to not have either one," the former first lady said. "And because some people believed in her, she believed in me. And that's why I believe with all my heart in America and in the potential of every American."

The tribute to Dorothy Rodham harkened back to Clinton's memoir, "Hard Choices," where she wrote, "No one had a bigger influence on my life or did more to shape the person I became" than her mother.

Rodham's childhood was "marked by trauma and abandonment," Clinton wrote, noting that her mother was on her own and working as a housekeeper and nanny by age 14. In spite of the challenges she faced, Rodham told her daughter she thrived in life because of the help of others.

In her first major campaign speech, the former Democratic senator also blasted her Republican opponents for the White House, criticizing their top-down economic policies as "the same old song." Clinton attacked the GOP's "mass amnesia" when it came to easing banking regulations to benefit Wall Street and criticized their promise to repeal the Affordable Care Act "to take away health insurance" from everyday Americans.

But the former secretary of state's attacks on the GOP weren't limited to conservative fiscal agendas. She also lambasted Republicans for adopting what she said were views against women, the gay community and immigrants.

"They shame and blame women rather than respect our rights," Clinton said. "They want to put immigrants who work hard and pay taxes at risk of deportation ... and they turn their backs on gay people who love each other."

"Fundamentally they reject what it takes to build an inclusive economy," the Democratic contender said. "It takes an inclusive society."

Clinton also made "family issues" a focal point of her campaign, folding in policies for immigration reform, early childhood education and child care accessibility, and criminal justice under the umbrella. She also made a case for higher education reform, especially to "lift the crushing burden of student debt."

Her focus on disenfranchised Americans also included a pitch for universal automatic voter registration, which Clinton proposed earlier this month. The former first lady promised to "fight back against" efforts by Republicans that she says restrict minority and youth access to voting.

"What part of democracy are they afraid of?" Clinton asked.

Appealing to her left-leaning base, the Democratic candidate has more readily incorporated populist sentiments into her campaign platform since her last run for the presidency, especially in championing immigration reform policies that reach even beyond President Obama's executive action last year.

But some progressives had a lukewarm reception to Clinton's speech, saying it lacked the specifics for a "bold economic vision."

"This was mostly a typical Democratic speech -- much better than the direction Republicans offer America, but not the bold economic vision that most Americans want and need," Adam Green, co-founder of the Progressive Change Campaign Committee, said in a statement. "Clinton's allusions to reining in Wall Street, ending corporate tax havens and addressing inequality open the door to a corporate accountability agenda -- but Americans need to see specifics. We need a Democratic nominee ready to take on the powerful financial interests that keep our economy down."

In a moment of levity that earned a few cheers, Clinton also addressed issues with entering the presidential race at 67 years old.

"All of our presidents come into office looking so vigorous," the former first lady said. "Well, I may not be the youngest candidate, but I will be the youngest woman president in the history of the United States."

Conspicuously absent from Clinton's speech were specifics about her time as secretary of state during Mr. Obama's first term.

She made one reference to Vladimir Putin, saying she "stood up to" the Russian leader when she worked to pass a treaty to limit Russian nuclear warheads. But she noticeably avoided any talk of her stance on trade -- an issue that has dominated recent headlines because of congressional Democrats' internal strife on fast-track trade legislation.

The Clinton camp has distinguished between the official start of the campaign and the "ramp-up," where the Democratic presidential candidate toured the country attending roundtables with working-class Americans in key early-voting states. Clinton announced her 2016 White House bid in April.

After the rally, Clinton heads to Iowa, home to next year's first-in-the-nation caucuses, followed by stops in early primary states New Hampshire, South Carolina and Nevada.