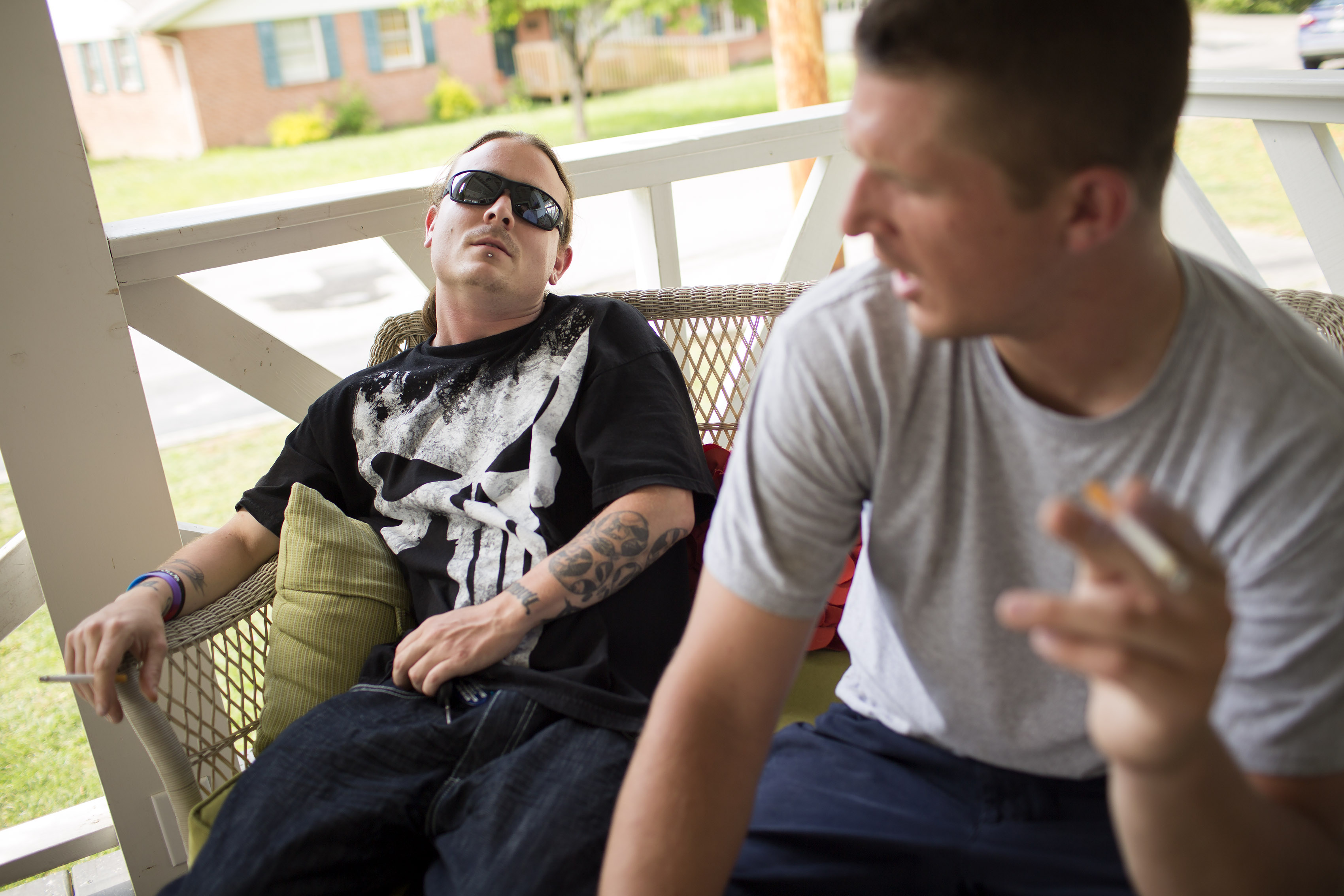 HAZARD, Ky. -- Patton Couch shook his head and clenched his teeth, recounting the night four years ago when he plucked a dirty needle from a pile at a flophouse and jabbed it into his scarred arm.

He knew the odds; most of the addicts in the room probably had hepatitis C.

"All I cared about was how soon and how fast I could get it in," he says. "I hated myself, it was misery. But when you're in the grips of it, the only way I thought I could escape it was one more time."

Couch, 25 years old and one month sober, is one of thousands of young Appalachian drug users recently diagnosed with hepatitis C. Yet public health officials warn that it could get much worse.

Two-hundred miles north, Scott County, Indiana, is grappling with one of the worst American HIV outbreaks among injection drug users in decades. Kentucky, with the nation's highest rate of acute hepatitis C, might be just a few dirty needles away from a similar catastrophe.

"One person could be Typhoid Mary of HIV," said Dr. Jennifer Havens, an epidemiologist at the University of Kentucky's Center on Drug and Alcohol Research, who has studied Perry County drug users for years as the hepatitis rate spiraled through small-town drug circles there. An explosion of hepatitis C, transmitted through injection drug use and unprotected sex, can foreshadow a wave of HIV cases.

In a study last month, the Centers for Disease Control and Prevention found that hepatitis C cases across four Appalachian states - Kentucky, Tennessee, West Virginia and Virginia - more than tripled between 2006 and 2012. Kentucky leads the nation in the rate of acute hepatitis C, with 4.1 cases for every 100,000 residents, more than six times the national average, according to the CDC.

"There's a sense of inevitability about it. Some say, 'I'm surprised it took me this long,'" she said, astonished by the indifference to a disease that destroys the liver, often leading to cancer or cirrhosis, and is the leading cause of liver transplants.

With the threat bearing down on Appalachia, local governments are scrambling to figure out how to stop it, whether through needle exchange programs, drug treatment or jail.

Hepatitis C once was an urban problem that mostly afflicted minorities, said Dr. John Ward, director of the CDC's Division of Viral Hepatitis. The recent outbreak is centered in rural areas among young, white drug users.

Scott County, Indiana, is in many ways the Midwestern equivalent of rural Appalachia: A quarter of the people live in poverty, treatment options are limited and both have long been seized by an epidemic of prescription drug abuse.

In Scott County, 160 people have tested positive for HIV in five months. Compare that to New York City, with more than eight million people, where just 49 drug users tested positive in 2013, said Greg Millett, director of public policy for the Foundation for AIDS Research.

"This is a canary in the coalmine for other places with high rates of hepatitis C."

Indiana Governor Mike Pence signed an emergency order in March temporarily allowing a needle-exchange program in Scott County to try to combat the outbreak. While maintaining that he opposed needle exchange policies in principle, Pence said "This is a public health emergency and I'm listening to my health department, I'm listening to the Centers for Disease Control, and I'll make my decision based on the best science and the best way we can stop this virus and stop this disease in its tracks.

But the counties must decide whether and how to set up a needle exchange.

The state's biggest cities, Louisville and Lexington, plan to launch programs this summer. However, Van Ingram, executive director for the Kentucky Office of Drug Control Policy, said few rural communities have expressed interest. Some may wait and let the urban centers work out the details first.

To many experts, the benefits are beyond debate.

"We have to change the way we think, we have to open our minds and think of other options and, yes, that includes needle exchanges," said Sue Yates, who oversees drug court programs in 20 counties that try to divert addicts away from jails and into treatment. "It's better than doing nothing, which is what we're doing now."

But Karen Cooper, director of the Kentucky River District Health Department, which serves a cluster of seven small counties in southeastern Kentucky, said that in smaller communities, fear of being exposed as a drug user may keep users away from a needle exchange.

Some object to the programs on moral grounds, claiming they facilitate drug use rather than prevent it.

"A needle exchange program is like giving a gun to someone suicidal," said Ben Barlow, a recovering addict in Clay County who is also positive for hepatitis C.

Needles now are bought and sold on the street for about $5 each.

Tammy Brooks always had clean ones.

She was a nurse practitioner with a prescription for injection vitamin supplements to treat anemia when she dislocated two disks and her doctor prescribed OxyContin to ease the pain. Two months later, she was shooting it into her veins. Before the addiction took hold, she wouldn't let her daughter watch R-rated movies. A few months in, the girl watched her mom shoot up.

So she began to barter needles to pay for her habit. She used them once or twice then sold them on the street, about 30 each week. She watched the scourge of hepatitis erupt around her and believes easy access to clean syringes saved her from the disease.

"If you knew your child was going to get in the neighbor's pool, wouldn't you want them to know how to swim? You wouldn't just say 'don't get in the pool.' Cause you know they will anyway."