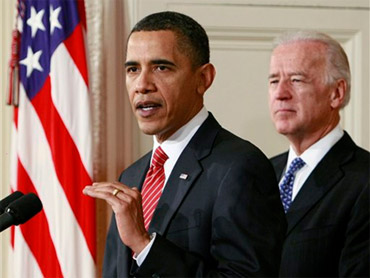 Summoned to success by President Barack Obama, the Democratic-controlled Congress approved historic legislation Sunday night extending health care to tens of millions of uninsured Americans and cracking down on insurance company abuses, a climactic chapter in the century-long quest for near universal coverage.

"This is what change looks like," Obama said a few moments later in televised remarks that stirred memories of his 2008 campaign promise of "change we can believe in."

Widely viewed as dead two months ago, the Senate-passed bill cleared the House on a 219-212 vote. Republicans were unanimous in opposition, joined by 34 dissident Democrats.

A second, smaller measure - making changes in the first - cleared the House shortly before midnight and was sent to the Senate, where Democratic leaders said they had the votes necessary to pass it quickly. The vote was 220-211.

Following the vote, President Obama, with Vice President Biden at his side, said it proves government "still works for the people."

Passage, he said, showed that lawmakers "didn't give in to mistrust or to cynicism or to fear."

"Instead," he said, "we proved that we are still a people capable of doing big things."

Obama went through the bill's provisions, stating that "this isn't radical reform, but it is major reform."

The bill "will not fix everything that ails our health care system, but it moves us decisively in the right direction," he said. "This is what change looks like." (Read more)

Obama will travel outside Washington on Thursday as he now turns to seeing a companion bill through the Senate and selling the health care overhaul's benefits on behalf of House lawmakers who cast risky votes. It is most likely that he will sign the bill on Tuesday, but the plans are not yet final, said a senior administration official, who spoke on condition of anonymity to discuss as-yet unannounced strategy.

Obama's young presidency received a badly needed boost as a deeply divided Congress passed the rare piece of legislation that will touch the lives of nearly every American. The battle for the future of the medical system - a sixth of the economy - galvanized Republicans and conservative activists, particularly the anti-government tea party movement.

Far beyond the political ramifications - a concern the president repeatedly insisted he paid no mind - were the sweeping changes the bill held in store for Americans, insured or not, as well as the insurance industry and health care providers that face either smaller than anticipated payments from Medicare or higher taxes.

The nonpartisan Congressional Budget Office said the legislation awaiting the president's approval would extend coverage to 32 million Americans who lack it, ban insurers from denying coverage on the basis of pre-existing medical conditions and cut deficits by an estimated $138 billion over a decade. If realized, the expansion of coverage would include 95 percent of all eligible individuals under age 65.

For the first time, most Americans would be required to purchase insurance, and face penalties if they refused. Much of the money in the bill would be devoted to subsidies to help families at incomes of up to $88,000 a year pay their premiums.

For the president, the events capped an 18-day stretch in which he traveled to four states and lobbied more than 60 wavering lawmakers in person or by phone to secure passage of his signature domestic issue. According to some who met with him, he warned that the bill's demise could cripple his still-young presidency, and his aides hoped to use the victory on health care as a springboard to success on bills to tackle stubbornly high unemployment that threatens Democratic prospects in the fall.

Obama watched the vote in the White House's Roosevelt Room with Vice President Joe Biden and dozens of aides, exchanged high fives with Rahm Emanuel, his chief of staff, and then telephoned Speaker Nancy Pelosi with congratulations.

Crowds of protesters outside the Capitol shouted "just vote no" in a futile attempt to stop the inevitable taking place inside a House packed with lawmakers and ringed with spectators in the galleries above.

Sen. John McCain said Monday morning that Democrats have not heard the last of the health care debate, and said he was repulsed by "all this euphoria going on."

Appearing on ABC's "Good Morning America," McCain, who was Obama's GOP rival in the 2008 presidential campaign, said that "outside the Beltway, the American people are very angry. They don't like it, and we're going to repeal this."

McCain, who is in a tough Republican primary fight in his home state, said the GOP "will challenge it every place we can," and said there will be reprisals at the polls, in Congress and in the courts.

Meanwhile, Secretary of Health and Human Services Kathleen Sebelius said on CBS' "The Early Show" that Americans will be "enthusiastic" about the health bill once they understand it.

"Once people understand what's in the bill and the fact that a lot of what they've been hearing has never been contemplated, has never been in the bill, that they'll be very enthusiastic about what congress did last night," Sebelius said.

Across hours of debate, House Democrats predicted the larger of the two bills, costing $940 billion over a decade, would rank with other great social legislation of recent decades.

"We will be joining those who established Social Security, Medicare and now, tonight, health care for all Americans, said Speaker Nancy Pelosi, partner to Obama and Senate Majority Leader Harry Reid, D-Nev., in the grueling campaign to pass the legislation.

"This is the civil rights act of the 21st century," added Rep. Jim Clyburn of South Carolina, the top-ranking black member of the House.

Republicans readily agreed the bill would affect everyone in America, but warned repeatedly of the burden imposed by more than $900 billion in tax increases and Medicare cuts combined.

Health Care Bill: What's In It?
Short-Term Effect of the Bill

"We have failed to listen to America," said Rep. John Boehner of Ohio, leader of a party that has vowed to carry the fight into the fall's midterm elections for control of Congress.

The final obstacle to passage was cleared a few hours before the vote, when Obama and Democratic leaders reached a compromise with anti-abortion lawmakers whose rebellion had left the outcome in doubt. The president issued an executive order pledging that no federal funds would be used for elective abortion, satisfying Rep. Bart Stupak of Michigan and a handful of like-minded lawmakers. (Read the text here.)

A spokesman for the U.S. Conference of Catholic Bishops expressed skepticism that the presidential order would satisfy the church's objections.

Republican abortion foes also said Obama's proposed order was insufficient, and when Stupak sought to counter them, a shout of "baby killer" could be heard coming from the Republican side of the chamber.

The measure would also usher in a significant expansion of Medicaid, the federal-state health care program for the poor. Coverage would be required for incomes up to 133 percent of the federal poverty level, $29,327 a year for a family of four. Childless adults would be covered for the first time, starting in 2014.

The insurance industry, which spent millions on advertising trying to block the bill, would come under new federal regulation. They would be forbidden from placing lifetime dollar limits on policies, from denying coverage to children because of pre-existing conditions and from canceling policies when a policyholder becomes ill.

Parents would be able to keep children up to age 26 on their family insurance plans, three years longer than is now the case.

A new high-risk pool would offer coverage to uninsured people with medical problems until 2014, when the coverage expansion would go into high gear.

GOP: We Owe It to Public to Block Bill
Obama to House: Health Care Reform is in Your Hands
What Do You Think of the Health Care Bill?

For the president, the events capped an 18-day stretch in which he traveled to four states and lobbied more than 60 wavering lawmakers in person or by phone to secure passage of his signature domestic issue. According to some who met with him, he warned that the bill's demise could cripple his still-young presidency.

After more than a year of political combat, Democrats piled superlative upon superlative across several hours of House debate.

Republicans attacked the bill without let-up, warning it would harm the economy while mandating a government takeover of the health care system.

"And, the American people know that you can't create an entirely new government entitlement program without exploding spending and the deficit."

Obama has said often that presidents of both parties have tried without success to achieve national health insurance, beginning with Theodore Roosevelt early in the 20th century.

The 44th president's quest to succeed where others have failed seemed at a dead end two months ago, when Republicans won a special election for a Massachusetts Senate seat, and with it, the votes to prevent a final vote.

But the White House, Pelosi and Reid soon came up with a rescue plan that required the House to approve the Senate-passed measure despite opposition to many of its provisions, then have both houses pass a fix-it measure incorporating numerous changes.

To pay for the changes, the legislation includes more than $400 billion in higher taxes over a decade, roughly half of it from a new Medicare payroll tax on individuals with incomes over $200,000 and couples over $250,000. A new excise tax on high-cost insurance policies was significantly scaled back in deference to complaints from organized labor.

In addition, the bills cut more than $500 billion from planned payments to hospitals, nursing homes, hospices and other providers that treat Medicare patients. An estimated $200 billion would reduce planned subsidies to insurance companies that offer a private alternative to traditional Medicare.

The insurance industry warned that seniors would face sharply higher premiums as a result, and the Congressional Budget Office said many would return to traditional Medicare as a result.

The subsidies are higher than those for seniors on traditional Medicare, a difference that critics complain is wasteful, but insurance industry officials argue goes into expanded benefits.