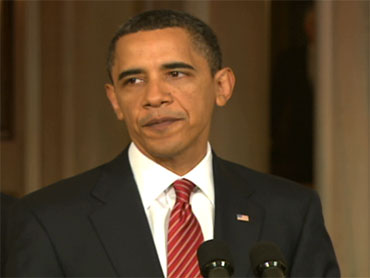 President Obama, with Vice President Biden at his side, hailed historic passage of the health care reform package Sunday evening, stating that the vote proves government "still works for the people."

Passage, he said, showed that lawmakers "didn't give in to mistrust or to cynicism or to fear."

"Instead," he said, "we proved that we are still a people capable of doing big things."

The president thanked members of Congress, stating that while they didn't have an easy vote, they made "the right vote." He also thanked his staff, the vice president and Health and Human Services Secretary Kathleen Sebelius.

The vote, he said, "answers the dreams of so many who have fought for this reform." He said the package was "worthy of the people we were sent here to serve" and hailed the people who had fought for it, among those who knocked on doors to encourage their neighbors to back the bill.

"This moment is possible because of you," said the president.

Mr. Obama went through the bill's provisions, stating that "this isn't radical reform, but it is major reform."

The bill "will not fix everything that ails our health care system, but it moves us decisively in the right direction," he said. "This is what change looks like."

The president called passage a "victory for common sense." He said there will be a "frenzy of instant analysis" over the political implications of passage, but that "long after the debate fades away and the prognostication fades away and the dust settles," what will be left over will be "a health care system that incorporates ideas from both parties."

The president called on the Senate to pass the House reconciliation bill quickly, an unlikely prospect as Republicans have vowed to try to send the bill back to the House and slow down the process with amendments.

He said that while "the work of "revitalizing our economy goes on," lawmakers now "march on with renewed confidence, energized by this victory on their behalf."

It meant "another stone firmly laid in the foundation of the American dream," he said.

Mr. Obama said lawmakers had "answered the call of history."

"We did not shrink from our challenge, we overcame it," he said. "We did not fear our future, we shaped it."

A White House aide told CBS News the president watched the House vote with Biden and staff in the Roosevelt Room. The aide said there were high fives and hugs all around after the vote.