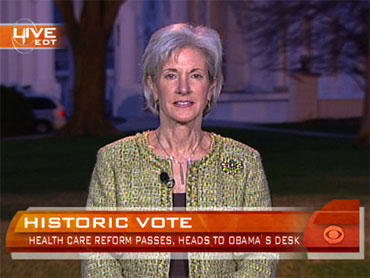 Secretary of Health and Human Services Kathleen Sebelius says that, despite a new CBS News poll showing widespread skepticism and confusion, Americans will be "enthusiastic" about the health reform bill passed by the House of Representatives once they understand it.

"I think what's been going on for the better part of a year is a lot of attempts to confuse and scare Americans," Sebelius told "Early Show" co-anchor Maggie Rodriguez.

Sebelius said she was "absolutely convinced" that "once people understand what's in the bill and the fact that a lot of what they've been hearing has never been contemplated, has never been in the bill, that they'll be very enthusiastic about what congress did last night."

Asked whether Mr. Obama would keep his promise and stick by his executive order reiterating a U.S. ban on federal funding for abortions, Sebelius said, "Clearly, he intends to keep his word."

"He's kept his word all along. This is the kind of reform he said would happen if he were elected president. He talked about this for two years on the campaign trail. And here we are with, finally, a promise kept to the American people."