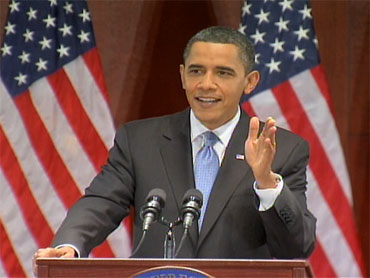 "After a year of debate, after every argument has been made by just about everybody, we're 24 hours away," the president said. "It is time to pass health care reform for America, and I am confident you are going to do it tomorrow."

He called the comprehensive legislation a vast improvement over the status quo, as well as "the single most important step that we have taken on health care since Medicare."

The House will vote tomorrow on both the Senate health care bill, as well as a reconciliation bill that "fixes" some aspects of the Senate bill. Democrats say they will have the votes needed tomorrow to pass both bills, but it is unclear from whom exactly the 216 "yes" votes needed will come. House leaders are still in negotiation with Democrats who are on the fence about the bill because of various issues, such as its abortion language.

Mr. Obama acknowledged today, "I can't guarantee that this is good politics."

While Republicans have warned Democrats that the health care vote will be an extreme political liability for Democrats in this fall's midterm elections, Mr. Obama said it would be much harder to "mischaracterize" the bill after it passes.

"They know that after this legislation is passed and after I sign this bill, lo and behold, nobody's pulling the plug on granny," Mr. Obama said. "And it turns out people who like their insurance will be able to keep their insurance."

The Senate health care bill, he said, "runs straight down the center of American political thought" and is built on provisions that will be popular with the public. For instance, the president said, the bill includes the toughest insurance reforms in history

"This is a patients' bill of rights on steroids," he said.

The public will also benefit from the government-based exchanges that will allow individuals and small businesses to pool together to purchase insurance, as well as the tax cuts for small businesses providing health care and subsidies for individuals, he said. It is also one of the biggest deficit reduction measures in history, he said.

Following reports that the president has asked Democrats to vote for the bill in order to preserve the White House's political capital, Mr. Obama said today, "Don't do it for me, don't do it for the Democratic party, do it for the American people."

He appealed to their highest ideals as public servants.

"Every single one of you at some point before you arrived at Congress, and after you arrived in Congress, have met constituents with heartbreaking stories, and have looked them in the eye and told them, 'I'm going to do something about it,'" he said. "This is the time to make true on that promise."