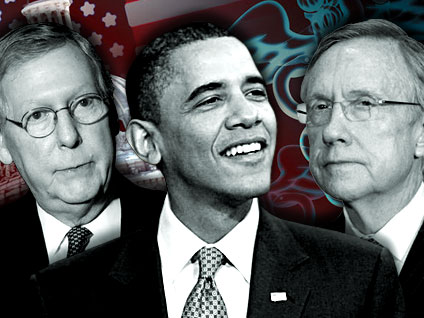 Democrats in the House pulled off a narrow but significant victory Sunday night, passing the Senate's comprehensive health care bill, as well as a reconciliation "fix it" bill. But the legislative, political and legal battles over the bill aren't over.

The Senate bill is primed to become law once President Obama signs it, but the Senate must still pass the reconciliation bill that will alter the main bill in order for Democrats' work on health care to be over. Among other things, the bill would strip the Senate bill of politically-toxic provisions like the so-called "Cornhusker Kickback."

Republicans, however, plan to obstruct the process every way they know how, from offering hundreds of amendments to challenging whether elements of the bill are allowed under the rules of the special process of reconciliation. For anyone who may have expected Republicans to give up their opposition after last night's vote, Sen. Judd Gregg (R-N.H.), the top Republican on the Senate Budget Committee, made it clear yesterday passing the reconciliation bill would be a battle.

"The last thing we should do is allow this failed policy to worsen," Gregg said in a statement. "The reconciliation bill was used to buy votes in the House, but that does not mean that the Senate should go along with this misguided exercise."

The GOP wants to force Democrats to stand by the "Cornhusker Kickback" and other less-than-ideal provisions in the bill. And after more than a year of debate on health care, some Democrats are no doubt ready to move on to other issues. Anxious to strip the bill of those elements, however -- as well as pass the student loan reforms included in the reconciliation bill -- it's likely the Senate will successfully pass the 153-page measure. Senate Majority Leader Harry Reid assured House Democrats that the reconciliation bill will pass with a letter from more than enough senators indicating they support its passage.

Before the Senate can take up the reconciliation measure, President Obama must sign the Senate bill into law. The White House says there's no rush for the signing ceremony to take place, CBS News White House Correspondent Peter Maer reports, but it nevertheless is expected to happen early this week.

Once the Senate takes up the reconciliation bill, Democrats will have to be very mindful of the rules. Reconciliation is a process that allows the Senate to overcome a filibuster with just 51 votes, but it can only apply to measures that impact the federal budget -- a rule known as the "Byrd rule," named for its author, Sen. Robert Byrd (D-W.V.). What is acceptable under the Byrd rule is decided by the Senate parliamentarian -- a congressional official who acts as a sort of Senate referee.

A group of senators and staffers are expected to meet with the parliamentarian today, the Washington Post reports, to discuss certain provisions that could possibly violate reconciliation rules. The GOP has zeroed in on the Democrats' plan to alter the so-called "Cadillac" tax on high-end insurance plans, arguing that it would affect the Social Security trust fund -- something not allowed under reconciliation rules.

Before the Senate bill passed in the House yesterday, House Minority Leader John Boehner issued a warning to House Democrats that their colleagues in the Senate had not yet discussed the Social Security trust fund issue with the parliamentarian, indicating they would not bother to pass the reconciliation bill.

"It should now be clear to House Democrats that they have no guarantees," Boehner said in a statement. Democratic staffers called that charge "absurd," ABC News reports. Some Senate Democrats said they actually tried to schedule a meeting with GOP senators and the parliamentarian for Friday, but the Republicans "boycotted" it, the Hill reports.

Reid wants to kick off 20 hours of debate over the reconciliation bill Tuesday, the Washington Post reports, assuming Mr. Obama has signed the Senate bill by then. Sen. John Cornyn (R-Texas) said on "Fox News Sunday" that the GOP plans to offer "in the order of hundreds" of amendments to the legislation. However, if debate does indeed start Tuesday, it is likely the GOP amendments would only prolong the debate through Saturday at the latest, according to the Post.

If any amendments are passed during the Senate debate, the House would have to vote once again on the updated reconciliation package. Given that the House has already passed the measure once, however, finding the votes for a slightly tweaked version should not be a problem for Democrats.

Of course, even after all the legislation is passed, the battle will continue. Republicans plan on making the health reform package a campaign issue in the upcoming midterm elections, and numerous state officials are already questioning the legality of the sweeping legislative overhaul.

Virginia's state attorney general, among other state attorneys general, has indicated he will file legal challenges to the bill on the grounds that it is unconstitutional to require individuals to purchase health care, the New York Times reports.

Meanwhile, Idaho Gov. C.L. "Butch" Otter signed into law this month a measure requiring the Idaho state attorney general to sue the federal government over the health care bill. Similar legislation is pending in as many as 37 other states.

President Obama will continue touring different parts of the country to convince voters his health care bill will be beneficial. White House Press Secretary Robert Gibbs announced on Twitter that Mr. Obama will go to Iowa City, Iowa on Thursday, "where the grassroots campaign for health insurance reform started."

UPDATE: House Democratic leaders today signed the health care bill, a formality that takes place before the bill is sent to the president for his signature. While this is a typical step in the legislative process, Democratic leaders invited the media to the signing because of the bill's significance. Mr. Obama plans to sign the bill late Tuesday morning.