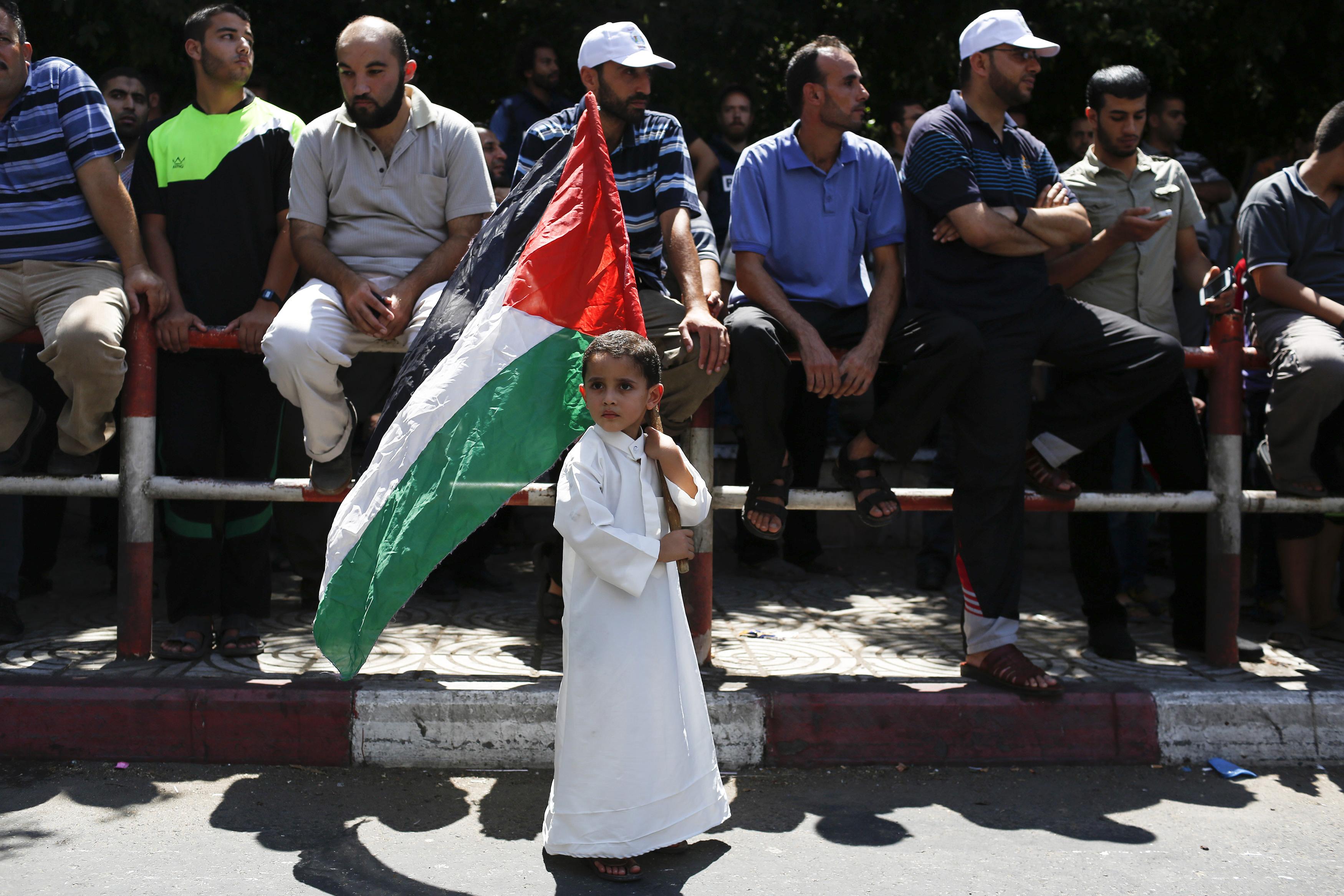 GAZA CITY, Gaza City -- Hamas held on Thursday its first public rally since a cease-fire with Israel, vowing never give up its arms and continue to fight for the lifting of the blockade of Gaza.

The uncompromising rhetoric of the official, Mushir al-Masri, comes on the third and final day of a truce in the monthlong Israel-Hamas war and at a time when the militant group and other Palestinian factions are in Cairo indirectly negotiating with Israel for a permanent cease-fire and steps to lift the seven-year-old blockade of the coastal strip by Israel and Egypt.

In Cairo, Egyptian security officials struggled to bring the two sides closer together, with one official saying that Hamas and other Gaza militants were refusing to compromise.

Unlike Hamas rallies on previous occasions, only several thousand showed up for the event in the heart of Gaza City. The modest turnout was not necessarily a sign of waning support for the group, but most likely a reflection of the fatigue felt by most of Gaza's 1.8 million residents after four weeks of a ruinous war, as well as anxiety over whether the three-day truce will be extended.

"Our fingers are on the trigger and our rockets are trained at Tel Aviv," al-Masri told the rally.

Cairo is mediating indirect talks between Israel and Hamas on extending the 72-hour cease-fire that expires Friday morning. Hamas has demanded the lifting of an Israeli and Egyptian blockade imposed on the coastal territory after the Islamic militant group seized power in 2007.

Israel has said the militants must disarm first, which al-Masri insisted was out of the question.

"The war is not over yet. Our men are still in the field, manning forward positions, our fingers are on the trigger, and our rockets are trained on Tel Aviv, Lod and beyond," he said. "It is out of the question that the weapons of the resistance should be on the negotiating table. They have not been put on the table and, God willing, they will never be."

Al-Masri insisted fighters are "in good shape" despite four weeks of fighting and still had tunnels extending into Israel that could be used for attacks if Hamas' demands are not met.

The Egyptian security official, who spoke on condition of anonymity because he was not authorized to talk to the media, said the Palestinian delegation's stance had hardened after the arrival in Cairo of Hamas and Islamic Jihad leaders from the Gaza Strip.

He said Azzam al-Ahmad, the leader of the delegation and the representative of the Western-backed Palestinian President Mahmoud Abbas, had threatened to withdraw from the talks if the two militant groups do not show more "flexibility," adding that the delegation, which was supposed to leave Cairo on Thursday, would stay through the weekend.

Palestinian delegates could not immediately be reached for comment.

On July 8 Israel began an air campaign on the territory and nine days later it sent in ground troops it said would target rocket launchers and cross-border tunnels built by Hamas for attacks inside Israel.

Nearly 1,900 Palestinians have been killed in the fighting, three-quarters of them civilians, according to the United Nations. Israel says some 900 Palestinian militants were among the dead. Sixty-four Israeli soldiers and three civilians inside Israel have also been killed.

More Americans blame Hamas than Israel for the recent fighting, according to a new CBS News poll. Thirty-four percent think Hamas is most to blame, while just 6 percent lay most of the blame on Israel. However, nearly half - 47 percent - think both sides are equally to blame.