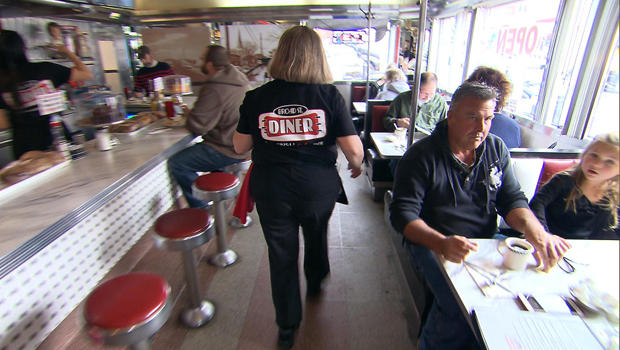 Keeping a busy diner running is a tall order. As a sort of appetizer for our annual “Food Issue” next Sunday, we decided to drop in on a few Greek diners with our chef-in-residence Bobby Flay:

You know those times when you’re hungry but can’t decide what to order?  Hmm, what’ll it be?  Pancakes or paella? A burger or brisket? No problem! Whatever makes your mouth water is almost certainly found at a Greek diner.

How do they do this? How do they have your French toast with your vanilla apples? And then have popcorn shrimp, seafood paella, a whole Mexican corner, some Greek specialties, a list of 30 different burgers?

What’s the magic? “It kind of moves like a well-oiled machine,” said one customer. “All the moving parts just happen and it’s magic.”

So what IS the secret? It starts with one man: Archie Dellaportas, a quiet but demanding head of the family whose restaurant has been named Best Diner in New York City. He came from Greece when he was 16 hoping for a better life.

“You have to work,” he told Flay. “You own a diner, you gotta work more than eight hours a day.”

He met his wife, Patty, while working in her dad’s diner. She agrees that the Greek work ethic is just a big part of why diners are successful. “Yes. He’s here 20 years, hasn’t taken a day off, really,” she said.

Their oldest son, Kal, says another secret to success is experienced short order cooks, who use a few simple ingredients -- chicken, eggs, beef and potatoes -- to make most dishes … fast!

“So you’ve got the burger going, somebody else has set up the plate, and you call down there for the egg -- and it all comes together on one plate?” Flay asked.

These are the little things that don’t necessarily get done in a regular restaurant.

Now, Kal (along with his siblings, Peter and Theoni) are being groomed to take over when Archie finally puts his feet up … if they can handle it.

Flay asked Dellaportas if his sons have the same work ethic as he does.

“But getting them here sometimes is hard? You have to call them up, ‘Get out of bed’?”

Peter offered that he and his brother are willing to put in the hours necessary to be successful in the business. “There’s two of us” he laughed.

Still, despite the grueling hours, there’s a reason they keep coming back.

“It’s my father,” Peter said. “My father worked so hard to get it where it is. It’s part of our lives. We grew up in the diner. It’s part of my life. And I want to thank it for what it’s given me.”

It’s a sentiment found in many family-run restaurants, but why are so many diners run by Greeks?

Food critic Pete Genovese explained: “That initial wave of immigrants, they come over, open diners, and then their brothers, their cousins, their sisters come over. Where do they get jobs? In the diner. The Greeks just sort of take over diners.”

“They didn’t call it a diner, they called it a kafeneion,” he said. “It’s a place where the locals hung out. It’s basically a glorified coffee shop. A lot of open air, a place to meet your buddies there.  Most importantly, it’s the place to find out what’s going on in the community -- local news, local gossip. And what is the American diner today? That’s exactly the first place you go if you want to find out who’s doing what to whom, this local scandal, who’s about to get indicted.”

For Nick and Maria Kallas, children of Greek immigrants, a community family place is all they’ve ever known.

“Our parents owned a diner together, and we basically grew up together,” Nick said. “My father was the front guy, and her father was the chef in the back.  Our families knew each other.”

The couple bought the nearly 100-year-old Broad Street Diner in Keyport, N.J., last year.  “I always loved these little stainless steel diners,” Nick said. “Always wanted one. So I got a phone call, we came down and had breakfast and that was it. We said yes, definitely. And I loved it. I fell in love with it, the town, everything.”

He showed Flay today’s special: “We do a Greek combo. Chicken souvlaki, tzatziki, spinach pie and a baby Greek salad. $9.95, and it sells out.”

“Of course, it sells out -- you’re giving it away for free!” Flay laughed.

No wonder Pete Genovese just named the Broad Street Diner the No. 1 Diner in New Jersey, beating out nearly 600 others -- quite an accomplishment, considering the state is the diner capital of the world.

And to what does Nick attribute his success? “My wife!” he laughed.

And with three boys, Nick and Maria Kallas already have the next generation lined up, like it or not.

“I don’t know if I would push ‘em to it,” Maria said. “But given what I’ve seen, just with family, with us, once you get in the door, it’s really hard to get out. It is!”