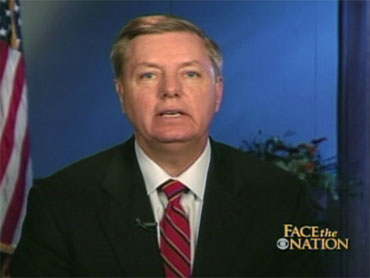 "Absolutely I believe they are," he said on CBS' "Face the Nation" Sunday. "I believe the Holocaust existed. I've got one rule of thumb: If the president of a country denies the Holocaust, you should believe the worst, not the best, about what they're doing.

"They're hiding nuclear programs for a purpose. They're trying to develop a nuclear weapon," he told CBS News' Harry Smith.

"If they are successful, the Sunni-Arab states in a region will want a nuclear weapon. Israel becomes at risk. We're walking down the road to Armageddon. We have about 18 months using the international community to decisively act," he warned.

He argued that the international community can no longer offer "half-measures" to deal with rogue nations. China, he said, needs to join with Russia to enforce further sanctions against Iran.

Graham said he would consider military action as "the last resort when all meaningful sanctions fail."

He also pointed to U.S. and NATO activities in fighting Taliban militants as demonstrative.

"What we do in Afghanistan will affect the ability of Iran to get the message. This regime needs to be delivered a message that the international community is deadly serious about stopping their nuclear program.

"[T]he worst thing that could happen to this country in my view is for Iran to get a nuclear weapon because that changes everything in the Mideast for the worst," he explained.

Smith asked the senator whether President Obama should give General Stanley McChrystal the additional 40,000 troops he has asked for in Afghanistan.

"Yes," Graham replied. "I would give the general the resources he needs to regain lost momentum. ... You can't have a second shot at governance until you get the security situation right. This counterinsurgency strategy of General McChrystal's has been well thought out. I hope the president will give him the troops he says he needs."

After having made several trips to Afghanistan, the senator concluded that the situation there is deteriorating and that more combat power is needed "to take fight back to Taliban. Taliban have reemerged. Sixty-eight thousand troops can't turn Afghanistan around without some help. Hope they get help they need."

When asked to predict what would be the outcome if President Obama does not give Gen. McChrystal the 40,000 additional troops he requested, Graham said, "We're going to lose. We'll be driven out. The Taliban will come back stronger than they were before, [and] the moderates in Afghanistan will go back in hiding or get killed. NATO will be seen as a failure, and America will go it alone in the future.

"We can't let NATO fail in Afghanistan," he said. "This is NATO's fight, just not America's fight. The Taliban have come back for a reason. But the good news is that Afghan people don't want them back. With additional military power we can defeat them.

"We have to do what Secretary Clinton said [earlier on the program]: Push the Karzai government or the next government to do better. But until you get the military situation right, you'll never get better governance."

He also said failing in Afghanistan would bode ill for fighting militants in neighboring Pakistan.

McCaul says "there was no plan" for U.S. withdrawal from Afghanistan
Thanks for reading CBS NEWS.
Create your free account or log in
for more features.
View CBS News In
CBS News App Open
Chrome Safari Continue
Be the first to know
Get browser notifications for breaking news, live events, and exclusive reporting.