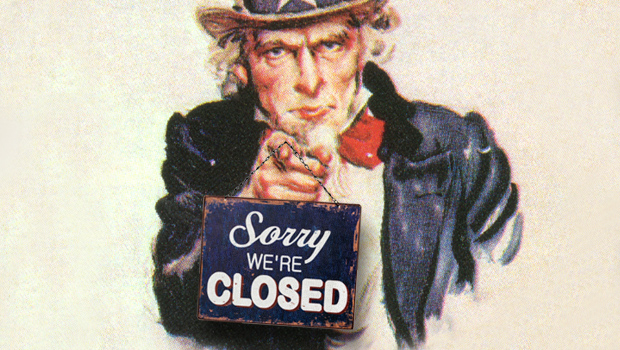 As the federal government heads into a second day of shutdown, both parties still appear to be at an impasse.

In an effort to break the stalemate, President Obama summoned congressional leaders to the White House for a late afternoon meeting Wednesday.

"The President will urge the House to pass the clean CR to reopen the government, and call on Congress to act to raise the debt ceiling to pay the bills we have already incurred and avoid devastating consequences on our economy."

On Wednesday afternoon, Reid sent Boehner a letter offering to appoint negotiators to discuss the budget if the short-term spending bill passed by the Senate were to pass the House as well.

"This conference would be an appropriate place to have those discussions, where participants would raise whatever proposals - such as tax reform, health care, agriculture, and certainly discretionary spending like veterans, National Parks, and NIH - they felt appropriate," Reid said. Describing the letter on the Senate floor later, Reid said, "My message to him was very simple. We have to stop playing these silly games."

House Republicans - who have been seeking to negotiate the short-term spending bill, not the longer term budget - do not see Reid's offer as a compromise. "The entire government is shut down right now because Washington Democrats refuse to even talk about fairness for all Americans under ObamaCare. Offering to negotiate only after Democrats get everything they want is not much of an offer," said Boehner spokesman Michael Steel.

On Tuesday evening, the House called up three bills that would have restored funding to delayed veterans benefits and closed national parks and memorials, and given the District of Columbia the authority to use local revenue to continue operation. For procedural reasons, the bills would have required a two-thirds majority. All three failed due to insufficient Democratic support.

Republicans intend to bring up the three bills again Wednesday, but this time using a procedural rule that will only require a simple majority. They have also added two more bills to fund the National Guard and Reserves as well as certain scientific research. The move will turn up the pressure on House Democrats, who have been calling for the Republican leadership to pass the Senate version of the spending bill with no additional amendments. Between 22 and 34 Democrats voted with Republicans on Tuesday to restore the funding.

Even if the bills do pass, they have no future in the Democratic Senate or at President Obama's desk. When the House plan became public Tuesday, Senate Majority Leader Harry Reid, D-Nev., called the bills "just another wacky idea from the tea party Republicans." And White House spokeswoman Amy Brundage said Mr. Obama would veto the measures, saying, "These piecemeal efforts are not serious, and they are no way to run a government."

"How does the White House justify signing the troop funding bill, but vetoing similar measures for veterans, National Parks, and District of Columbia?" he said. "The President can't continue to complain about the impact of the government shutdown on veterans, visitors at National Parks, and DC while vetoing bills to help them."

Much of Tuesday was spent with the two parties trading barbs about who was responsible for a shutdown. No one seemed to stray from their respective positions: Senate Democrats refuse to consider anything other than a spending bill with no extra measures attached, and House Republicans are seeking last-minute negotiations that could offer a chance to chip away at the health care law.

Early polling on the matter spelled trouble for the GOP. A Quinnipiac University National Poll released Tuesday morning shows that by a margin of 72 percent to 22 percent, American voters oppose a government shutdown over attempts to block the Affordable Care Act. And though voters are divided on the law itself, with 45 percent in favor and 47 percent opposed, 58 percent of those surveyed said they opposed cutting off funding a way to stop it from being implemented.

But a Gallup poll released Tuesday indicated that a shutdown may not have a long-term impact of the favorability ratings of either party. Before the 1995 government shutdown, President Clinton had a job approval of 52 percent. While that number took a hit in early January 1996, it had bounced back up to 52 percent by mid-March. His favorability rating was even less affected, falling five percentage points to 54 percent in early 1996, but rebounded by 58 percent by mid-March.

Then-House Speaker Newt Gingrich had a job approval rating of 37 percent that also dipped down in early January, to 33 percent. It rebounded to 35 percent later in the year. His favorability rating of 25 percent actually ticked up right after the shutdown to 31 percent, but then fell back to 24 percent by the middle of the year.

Today's Congress only has a 14 percent approval rating, according to Gallup, and therefore not much to lose.

Meanwhile, the White House announced Wednesday morning that President Obama has cancelled portions of a planned diplomatic trip to Asia next week as a result of the ongoing government shutdown.

Mr. Obama attempted to inoculate himself against a backlash to the shutdown by using a news conference at the White House Tuesday to accuse House Republicans of forcing an ideologically-driven shutdown.

"One faction of one party in one house of Congress in one branch of government shut down major parts of the government all because they didn't like one law," Mr. Obama said. "This Republican shut down did not have to happen, but I want every American to understand why it did happen. Republicans in the House of Representatives refused to fund the government unless we defunded or dismantled the Affordable Care Act. They've shut down the government over an ideological crusade to deny affordable health insurance to millions of Americans. In other words, they demanded ransom just for doing their job."