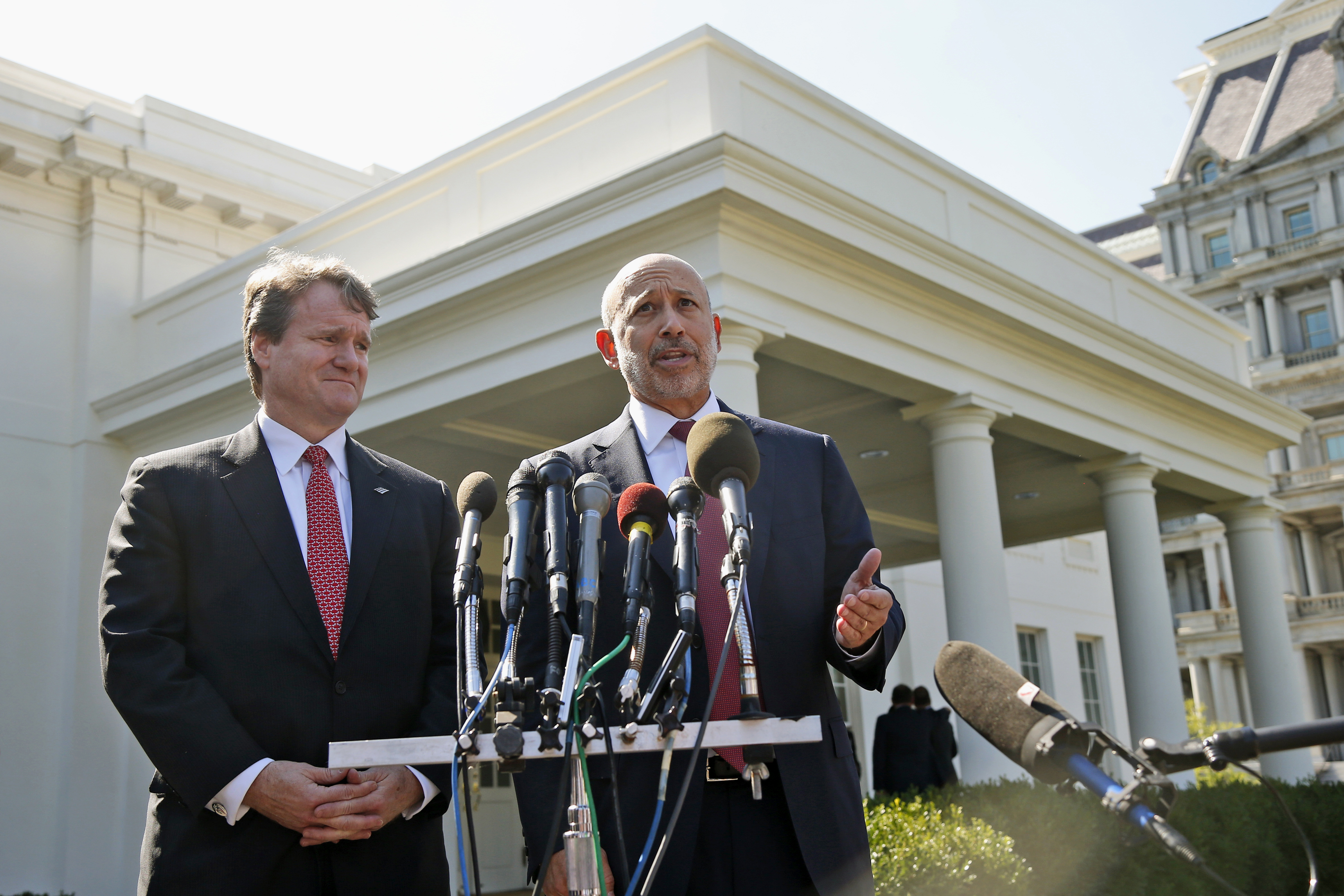 After meeting with President Obama at the White House on Wednesday, the CEOs of some of the nation's largest financial institutions warned that the government shutdown, or worse, a failure to lift the government's debt ceiling, could have an "extremely adverse" impact on an economic recovery that is still struggling to gain steam.

"There's a consensus that we shouldn't do anything that hurts this recovery that is a little bit shallow, not very well established, and is quite vulnerable," Goldman Sachs CEO Lloyd Blankfein told reporters outside the White House. "And a shutdown of the government, but particularly a failure to raise the debt ceiling, would accomplish that."

Bank of America CEO Brian Moynihan added that a failure to raise the federal government's borrowing limit, which could potentially cause the U.S. to default on its debt for the first time ever, is the "most serious" problem facing the economy. He cited the damage caused in 2011 by the drama of the last debt ceiling debate.

"We witnessed that in [August 2011], and we saw the ramifications - the slowdown in the economy," he said, "and we're facing that again."

The Treasury Department has indicated that the debt ceiling will be reached by October 17, calling on Congress to lift the cap before then.

Both men emphasized that the damage from a government shutdown, while not ideal, could be contained, but they warned policymakers not to play games with the debt ceiling.

"There's precedent for a government shutdown, there's no precedent for default," Blankfein explained. "We're the most important economy in the world, we're the reserve currency in the world. Payments have to go out to people - if money doesn't flow in, then money doesn't flow out. So we really haven't seen this before and I'm not anxious to be a part of the process that witnesses it."

Blankfein emphasized that his message is "apolitical," saying that he plans to meet with Republican leaders as well, and noting the ideological diversity of the group that met with the president.

"This wasn't a conversation about the issues that are underlying the political debate. This was an issue on process," he said, implying that Republicans' tactical choice to link government funding with the debate over Obamacare was ill-considered. "You can litigate these policy issues, you can re-litigate these policy issues in a political forum, but you shouldn't use the threat of causing the U.S. to fail on its obligations to repay its debt as a cudgel."