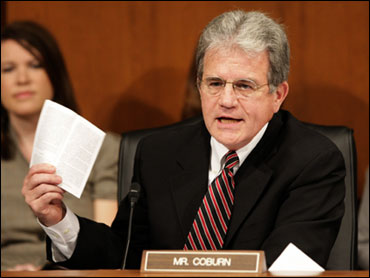 As part of their effort to slow (or even stop) passage of the bill that would make changes to the health care legislation signed into law by President Obama Tuesday, Senate Republicans have vowed to introduce hundreds of amendments.

One part of that strategy is to offer amendments on which Democrats would be hard-pressed to cast a "no" vote. If the Senate makes any amendments to the legislation, it has to go back to the House -- a possibility that Democrats are hoping to avoid.

GOP Sen. Tom Coburn of Oklahoma (pictured) today released a list of the nine amendments he has filed, and right at the top is a clear illustration of the strategy -- an amendment entitled "No Erectile Dysfunction Drugs To Sex Offenders." Here's how it's described:

By opposing that amendment, Democrats are, at least in theory, opening themselves up to charges that they support using government money to provide sex offenders with Viagra -- surely an unpopular position if ever there was one.

Other amendments on Coburn's list are designed to undercut Democrats' claims about what the bill will do - see amendment #5, "If You Like the Health Plan You Have, You Can Keep It." Coburn's third amendment says simply, "Congress Should Not Lecture Americans About Fiscal Responsibility."

Senate Democratic leaders are pressing their members not to break ranks and support Republican amendments (or introduce amendments of their own) in order to get the bill passed as soon as possible. In a statement, AFL-CIO president Richard Trumka made that same argument.

"Any amendment offered during this process is nothing more than a poison pill," he said. "A 'NO' on amendments is a 'YES' on health care."

Washington Unplugged: Stupak Says "It Was Worth It"

Health Care Bill Passed the House, But Battles Ahead in Senate, Court

Health Care Reform: Which Party Comes Out on Top?

Health Care Bill: What's In It?

Rush Limbaugh: "America is Hanging by a Thread"