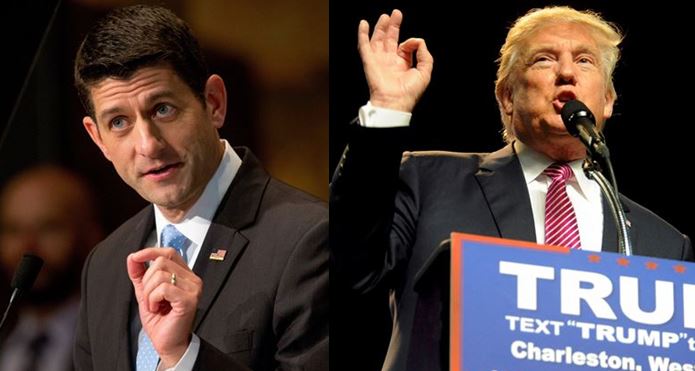 Presumptive Republican nominee Donald Trump is meeting with House Speaker Paul Ryan Thursday morning to discuss major policy differences. The gap between the men is so wide that Ryan, who represents conservatives still skeptical of Trump, announced last week he was withholding support for Trump until the rift could be mended.

Policy will be part of today's talks and so will money, reports CBS News correspondent Major Garrett. Trump and the Republican National Committee are nearing agreement on a pact to raise at least $1 billion for the general election -- funds crucial to Trump's election and Ryan's goal of protecting his majority.

"I think we want to see if we have the same ideas, because I represent a large group of people with very strong ideas and foundations," Trump said about the meeting on Fox News Channel Wednesday night.

He remained optimistic that differences with Ryan can be dealt with.

"You're gonna have differences, if you agree on 70 percent, that's always a lot," Trump said.

Finding 70-percent agreement will be a challenge.

"You cannot tackle this debt crisis that's coming in America if you do not fix this entitlement problem," Ryan said Tuesday in an interview with the Wall Street Journal.

On immigration, they also disagree.

"We have at least 11 million people in this country that came in illegally, they will go out," Trump said during a CNN Telemundo town hall in February.

"We have to come up with a solution that doesn't involve mass deportations," Ryan told students at a Georgetown University town hall in April.

"Donald J. Trump is calling for a total and complete shutdown of Muslims entering the United States," Trump said in December 2015.

"What was proposed yesterday is not what this party stands for," Ryan responded soon after.

Trump has recently stepped back from his temporary ban on Muslim immigration and named former New York Mayor Rudy Giuliani head of a commission to study it.

"We have exceptions, and again it's temporary, and ultimately it's my aim to have it lifted. Right now, there is no ban," Trump said.

Trump took new heat for pushing back on releasing his tax returns. Mitt Romney, the 2012 Republican nominee, wrote on Facebook:

"It is disqualifying for a modern-day presidential nominee to refuse to release tax returns to the voters, especially one who has not been subject to public scrutiny in either military or public service. Tax returns provide the public with its sole confirmation of the veracity of a candidate's representations regarding charities, priorities, wealth, tax conformance, and conflicts of interest. Further, while not a likely circumstance, the potential for hidden inappropriate associations with foreign entities, criminal organizations, or other unsavory groups is simply too great a risk to ignore for someone who is seeking to become commander-in-chief."

Trump claims he's unable to release his taxes because he's under audit, but the IRS has stated nothing prevents individuals from releasing their own returns while an audit is going on. The feud between Romney and Trump has history. In 2012 Trump called on Romney to release his returns, and said Romney's initial refusal "hurt him very badly."