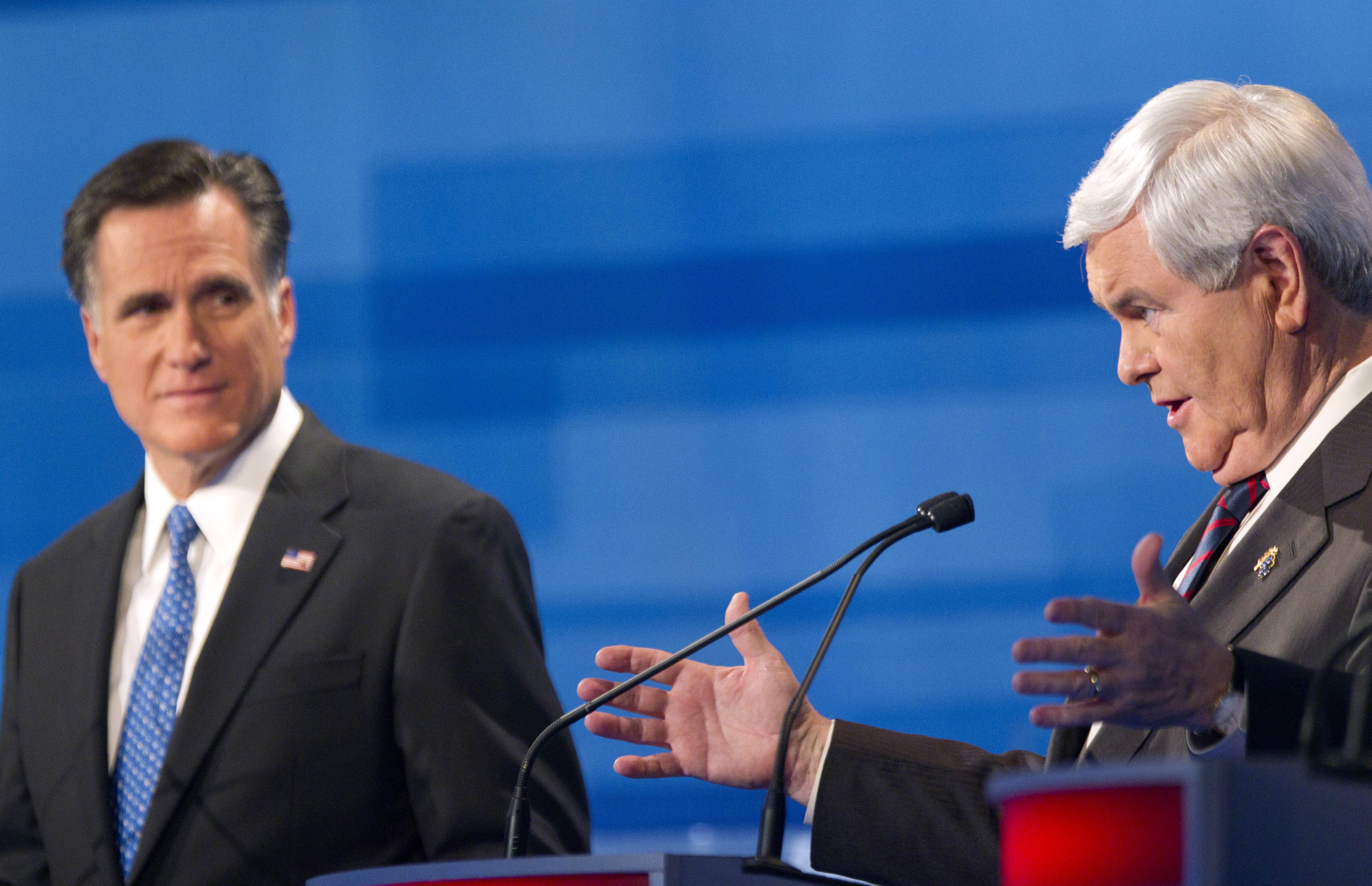 Mitt Romney didn't offer up a great performance at Monday night's Republican presidential debate. But he also avoided the sort of disastrous moment that would have jeopardized his apparent march toward the GOP presidential nomination.

There's no doubt that his rivals landed some punches. Rick Santorum, who needs to win the Jan. 21 South Carolina primary to have a realistic shot at the nomination, set a trap for Romney early in the debate on the issue of whether convicted felons should have the right to vote.

Romney was clearly unprepared for the challenge, and he tried to dodge Santorum's call to state a position; Santorum, a gleam in his eye, pressed for an answer. When Romney finally said violent felons shouldn't have the vote even after they've served their time, Santorum went in for the kill, stating that when Romney was Massachusetts governor, "the law was that not only could violent felons vote after they exhausted their sentences, but they could vote while they were on probation and parole, which was a more liberal position than I took when I voted for the bill in the Congress."

Romney seemed off-kilter during the exchange, and Santorum looked smug over the punch he landed. But the moment was far from catastrophic; Romney isn't going to lose the GOP presidential nomination by opposing voting rights for violent felons.

Romney also stumbled on the question of releasing his tax returns, first ignoring a challenge to do so from Rick Perry and later stopping short of promising to follow tradition and do so.

"I have nothing in them that suggests there's any problem and I'm happy to do so," Romney said. "I sort of feel like we're showing a lot of exposure at this point, and if I become our nominee and what's happened in history is people have released them in about April of the coming year, and that's probably what I'd do."

It was a weak answer, but it was far from the sort of "oops" moment that would have endangered his strong frontrunner status.

Romney was on firmer ground when he faced expected attacks, like one on his record at Bain Capital: He upped his (questionable) estimate of the number of jobs he helped create while there to 120,000 and said that "we learned from the experience" when businesses weren't successful and people were laid off.

"Ultimately, do I believe that -- that free enterprise works?" he said. "And that -- and that private equity and the various features of our economy work to actually improve our economy? To make America more productive with higher incomes and a brighter future? Absolutely. This is a major part of our economy, has been for a long time. Free enterprise, with all of its different dimensions and players, makes America the strongest economic nation in the world."

The two men who have perhaps the best chance of beating Romney in South Carolina, Santorum and Newt Gingrich, had good nights: Santorum looked commanding and confident, and Gingrich landed some of the best applause lines of the evening, including when he went after a 99-week period for unemployment benefits by saying "ninety-nine weeks is an associate's degree." Gingrich also won a rare debate standing ovationfor his battle with moderator Juan Williams over whether he has made comments that were offensive to African-Americans.

As for the other two men onstage: Ron Paul had one of his worst debates of the cycle. He was piled on by the other candidates over his relatively isolationist foreign policy and struggled to articulate his Libertarian ideals as clearly and forcefully as he has in the past. Texas governor Rick Perry, meanwhile, had a relatively solid performance - but with each passing day, his stagnant poll numbers make it increasingly clear that Republican voters are not going to forget his stumbles out of the gate.

Romney's rivals have just four days to figure out a way to keep the former Massachusetts governor, who leads in South Carolina polls, from a third straight primary victory that most believe would allow him to effectively wrap up the nomination. Based on Monday's performance, it's difficult to see how they will do so. The other candidates will spend the next few days harshly attacking Romney, both on the campaign trail and during Thursday night's GOP debate, in an effort to find some way to bring down the frontrunner. If they fail and Romney wins Saturday, the question turns to whether the time has come for the other candidates to hold their fire for the good of their party.

Romney contradicts past comments on abortion

Gingrich: My position should not offend blacks

Has Romney been hunting since 2008 "small varmints" gaffe?

Abigail Spanberger on Biden, FDR and what Democrats want - "The Takeout"
Brian Montopoli