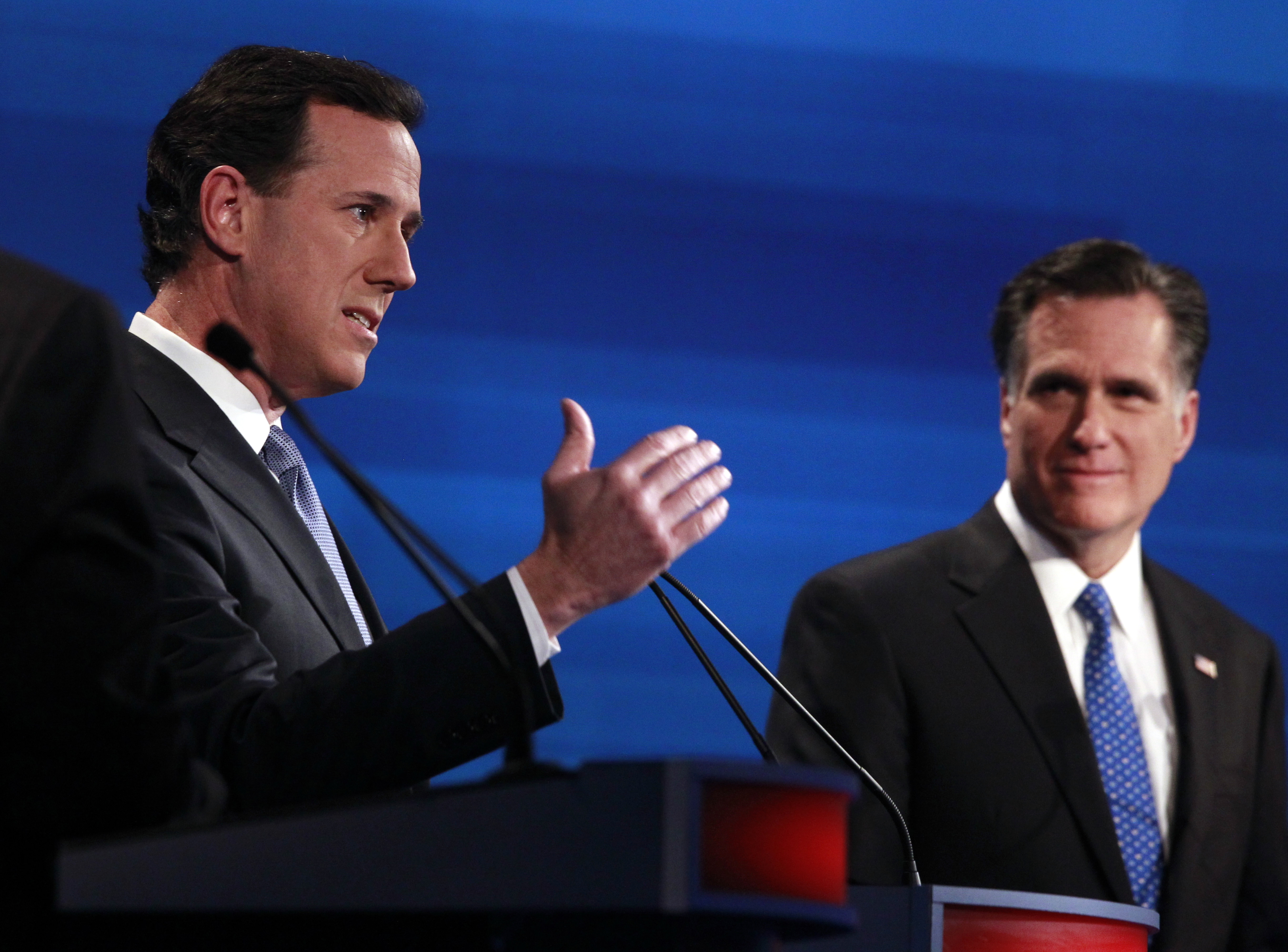 Republican presidential candidate Rick Santorum on Monday took GOP frontrunner Mitt Romney to task for opposing voting rights for felons who have served their time -- and for what Santorum cast as a flip-flop on the issue from his time as Massachusetts governor.

During the Fox News/Wall Street Journal-hosted Republican presidential debate ahead of the January 21 South Carolina primary, Santorum spun a question about the place of attack ads on the campaign trail into a back-and-forth with Romney over whether or not felons should be allowed voting rights after they have been released.

The candidate, who is making a hard push to emerge as the race's consensus anti-Romney candidate, appeared to have prepared the line of attack in advance.

When asked if the GOP field should abandon negative attacks against their opponents, Santorum claimed to have maintained a largely positive campaign before quickly turning to Romney with a direct question.

"Governor Romney's super PAC has put an ad out there suggesting that I voted to allow felons to be able to vote from prison," he said. "I would ask Governor Romney, do you believe people who have -- who were felons, who served their time, who have extended, exhausted their parole and probation, should they be given the right to vote?"

Romney, in response, attempted to address the more general question about the role of super PACs in politics. But Santorum was not having it.

"I'm looking for a question -- an answer to the question first," Santorum said, cutting Romney off.

"We have plenty of time," Romney responded. "I'll get there. I'll do it in the order I want to do."

Santorum pointed out that he had yielded Romney his own time in order to ask him the question, and reiterated his demand: "I'm asking you to answer the question, because that's how you got the time. It's actually my time."

"The bill I voted on was the Martin Luther King Voting Rights bill," he continued. "And this was a provision that said, particularly targeted African-Americans. And I voted to allow -- to allow them to have their voting rights back once they completed their sentence. Do you agree with that?" he prompted.

"I don't think people who have committed violent crimes should be allowed to vote again. That's my own view," Romney answered.

Santorum was ready with a cross-examination-style response.

"You know, it's very interesting you should say that, Governor Romney, because in the state of Massachusetts, when you were governor, the law was that not only could violent felons vote after they exhausted their sentences, but they could vote while they were on probation and parole, which was a more liberal position than I took when I voted for the bill in the Congress."

Santorum continued: "If, in fact, you felt so passionately about this that you are now going to go out and have somebody criticize me for restoring voting rights to people who have -- who have exhausted their sentence and served their time and paid their debt to society, then why didn't you try to change that when you were governor of Massachusetts?"

Romney, who appeared blindsided by the question, reiterated the fact that, as governor, he presided over a largely Democratic electorate.

"I had an 85 percent Democratic legislature," he said. "This is something we discussed. My view was people who committed violent crimes should not be able to vote, even upon coming out of office."

He pivoted quickly to the question of super PACs, reiterating candidates' legal obligations not to involve themselves in super PAC actions. He reminded the audience that "there have been some attacks on me, I mean, that have just been outrageous and completely inaccurate and have been shown to be inaccurate."

"That's the nature of the process," Romney said.

Santorum was not satisfied with the response.

"I need to respond to this. What the governor said is he didn't propose anything to change that law, and what he's saying is that the -- the ad that says that I said that -- or I voted to allow felons to vote is inaccurate. And it is inaccurate," he said. "And if I had something -- the super PAC that was supporting me -- that was inaccurate, I would go out and say, 'Stop it.'"