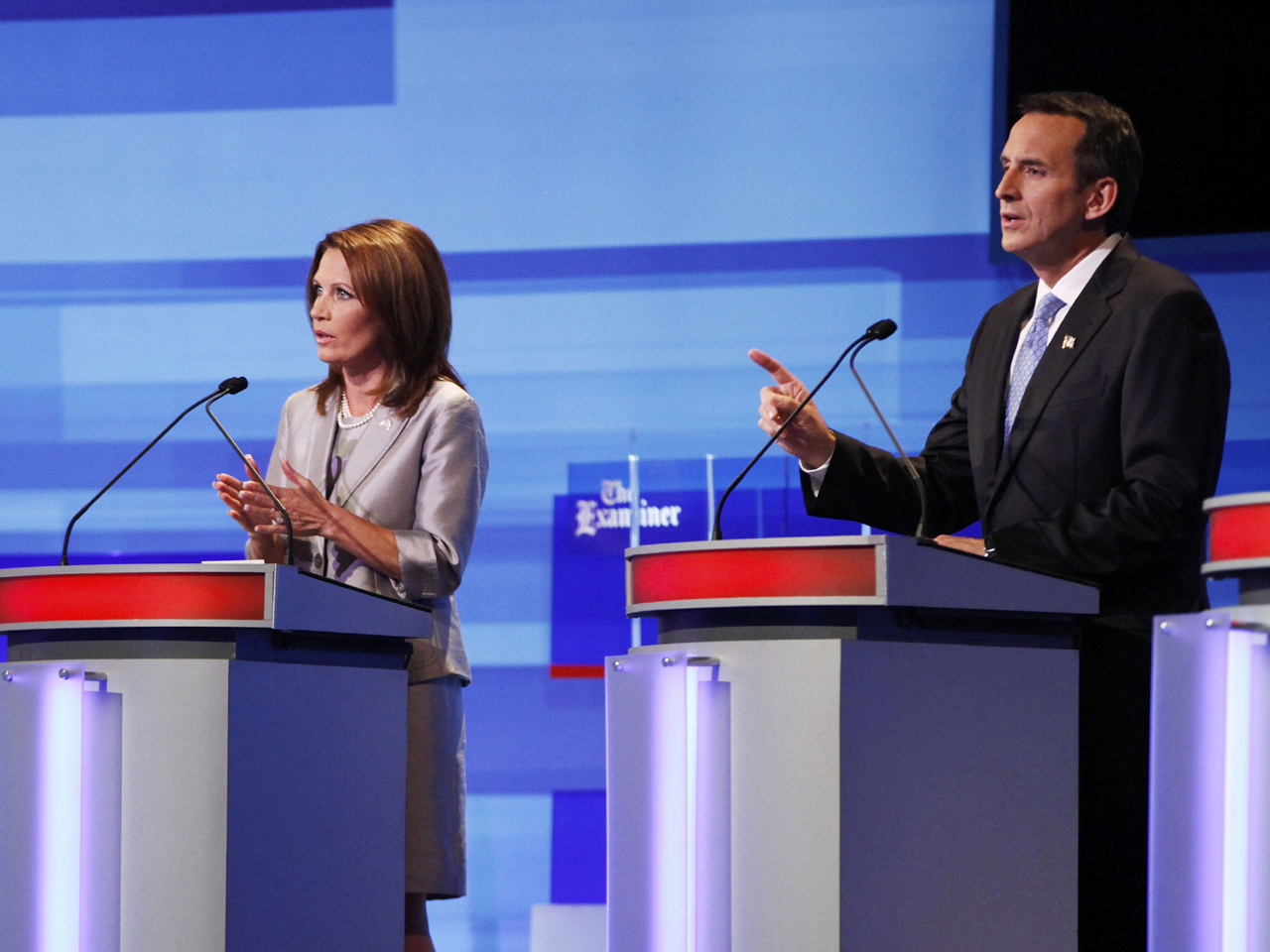 AMES, Iowa - The Republican presidential debate here Thursday night went about as well as Mitt Romney could have asked for.

Despite being the frontrunner for the nomination, Romney largely avoided the slings and arrows of his rivals. Instead, the fireworks were between perhaps the two people on the stage who represented the biggest threat to him: Tim Pawlenty and Michele Bachmann, who engaged in a series of nasty back and forths while Romney floated above the fray.

The battle royale between Pawlenty and Bachmann - who are both fighting hard for victory in the straw poll taking place here Saturday - heralded the Republican contest entering a new phase. No longer were the candidates just focused on Barack Obama. Now, it seems, they're willing to violate Ronald Reagan's 11th commandment - and speak ill of their fellow Republicans.

The fireworks started early, with the two Minnesotans' "Minnesota nice" turning Minnesota nasty. Pawlenty took the first shot, saying of Bachmann: "It is an undisputable fact that in Congress her record of accomplishment and results is nonexistent."

"That's not going to be good enough for our candidate for president of the United States," he continued. "...The American people are going to expect and demand more."

Bachmann appeared to be ready, unleashing a broadside at the former Minnesota governor's record.

"I would say governor, when you were governor in Minnesota you implemented cap and trade in our state and you praised the unconstitutional individual mandates and called for requiring all people in our state to purchase health insurance that the government would mandate. Third, you said the era of small government was over. That sounds more like Barack Obama, if you ask me."

As Fox News moderator Chris Wallace pointed out, there aren't many worse things a Republican can say about another Republican these days than they remind them of the president. But Bachmann didn't back down, saying that while Pawlenty backed Obama-like policies as governor, she has fought them every step of the way.

Pawlenty countered by arguing, essentially, that Bachmann has been a failure - after stating that "she's got a record of misstating and making false statements. And that's another example of that list."

"If that's your view of effective leadership with results, please stop, because you're killing us," he added.

In the spin room afterward, Bachmann spokesperson Alice Stewart told me Bachmann "wasn't going after anyone" during the debate - suggesting, contrary to the evidence, that the congresswoman's only aim during the debate was to talk about her record. Stewart also said that while the Bachmann campaign had released documentation to back up its claims, they were "still waiting" for Pawlenty to do the same.

Pawlenty representative Sarah Huckabee Sanders, meanwhile, suggested Bachmann "came into the debate tonight looking to attack" - despite the fact that Pawlenty took the first shot. She pointed to the fact that the Bachmann campaign handed reporters a document immediately after the fireworks entitled "The Big Government of Tim Pawlenty" that included a number of attacks on the former governor.

Pawlenty has been hobbled by the notion that he is too "nice" to be president - his decision not to attack Romney on health care in the second debate seriously hobbled his campaign - and he appeared determined Thursday night to show himself to be a fighter.

"I don't think anybody will question whether he is tough enough to be president" after this debate, Huckabee Sanders told me. "I think he answered those questions tonight."

Eric Fehrnstrom, Romney's spokesman, said the fact that the other candidates fought it out while Romney largely remained unscathed "helped point out Governor Romney's unique ability to focus on the president."

"The opponent is the Obama administration and its policies," Fehrnstrom continued. "Campaigns are a lot about focus, and that's what he's focused on." He added that Romney "doesn't view" the other Republicans on the debate stage as his opponent.

That will likely change as the field is winnowed. But Romney's decision to essentially skip Saturday's straw poll now looks particularly wise, since it helped keep the target off his back.

There was more harsh back and forth between Bachmann and Pawlenty -- at one point Pawlenty called Bachmann's comments "illogical" -- but let's put that aside and talk about the other candidates. Newt Gingrich also got into a battle Thursday night, but, oddly enough, it was with the Fox News moderators. Asked by Wallace about his campaign having been a "mess so far," Gingrich accused Wallace of "gotcha questions."

"I'd love to see the rest of tonight's debate asking us about what we would do to lead an America whose president has failed to lead, instead of playing Mickey Mouse games," added Gingrich, who appeared exasperated for much of the evening. Countered Wallace: "Speaker Gingrich, if you think questions about your records are Mickey Mouse, I'm sorry. I think those are questions that a lot of people want to hear answers to, and you're responsible for your record, sir."

Later, questioned about his seemingly inconsistent position about intervention in Libya, Gingrich accused moderator Brett Baier of another "gotcha question." He suggested his contradictory quotes had been taken out of context, adding, "the fact that I was commenting on Fox about a president who changes his opinion every other day ought to be covered by a Fox commentator using all the things I said, not handpicking the ones that fit your premise."

Meanwhile, an ideological tussle broke out between Ron Paul, a strong advocate for states' rights, and Rick Santorum, who said social conservative values should essentially override them.

10th Amendment up for debate within the Republican presidential field

Paul, as usual, was most animated on the issue of reducing the U.S. military presence abroad, at one point looking genuinely angry as he shouted, "It's trillions of dollars that we're spending on these wars!" The comment elicited a mixture of boos and applause from the audience.

Making his debate debut was former Utah governor and ambassador to China Jon Huntsman, who was polished, smooth, and somewhat forgettable amid all the fireworks. His best line came when asked about alleged cyber espionage from China, when he turned his experience as ambassador in the Obama administration into an advantage. "I think it would be great thing," he said, "to have a president of the United States who knew something about China." If the campaign turns to a focus on foreign policy, Huntsman could emerge as a serious contender.

Cain, the breakout star of the first debate, largely looked out of his depth this time around; at one point, a moderator explicitly referenced some of his past comments and asked if he simply wasn't quite ready for the job. Cain's most buzzworthy moment came when he said "never will I apologize for saying that Sharia law does not belong in the courts of the United States of America," prompting applause from the audience.

Rick Perry, Sarah Palin: The elephants not in the roomCBSNews.com special report: Campaign 2012

All the candidates stressed their opposition to raising taxes - and Romney and Pawlenty maintained they always had, even when confronted with evidence suggesting otherwise. Romney seemed to set up a contrast with Texas Governor Rick Perry, a strong rival who is entering the race Saturday, in stressing that he hasn't spent his whole life in government. Perry has worked his way up through the political ranks in Texas.

Asked about Romney's statements, Bob Schuman of Americans for Rick Perry told me, "well, [Perry] was a rancher first." He then went after the former Massachusetts governor.

Perry "has been a successful politician, and I think being a successful governor as opposed to being a mediocre governor trumps being a businessman," Schuman said.

The most awkward moment of the debate came when Bachmann was asked about her past comment that wives should be submissive to their husbands. Asked moderator Byron York: "As president, would you be submissive to your husband?"

Bachmann paused for a few moments before quipping, "thank you for that question, Byron." She then went on to offer up something of a non-answer.

"Marcus and I will be married for 33 years this September 10th. I'm in love with him. I'm so proud of him," she said. "And both he and I -- what submission means to us, if that's what your question is, it means respect. I respect my husband. He's a wonderful, godly man, and a great father. And he respects me as his wife. That's how we operate our marriage. We respect each other. We love each other."

From a policy perspective, however, the most important issue of the night centered on taxes. Congress has just formed a "supercommittee" to seek deficit reduction, and while most Democrats insist any deficit reduction plan include revenue increases, most Republicans say revenue increases should not be included. The candidates were asked if there was any ratio of spending cuts to tax increases they would accept - even up to ten to one.

Said Baier to the assembled contenders: "Can you raise your hand if you feel so strongly about not raising taxes, you'd walk away on the 10 to one deal?"

All the candidates raised their hands. No taxes. No matter what. And the crowd clapped approvingly.