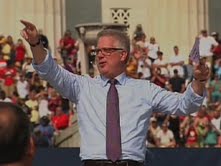 Glenn Beck lamented the "garish light of America today" at his "Restoring Honor" rally Saturday, saying it was time to reverse course from "what we've allowed ourselves to become."

Speaking at the Lincoln Memorial 47 years to the day after Dr. Martin Luther King, Jr. delivered his "I Have a Dream" speech in the same spot, Beck said, "Something beyond imagination is happening."

"Something that is beyond man is happening," Beck told his enthusiastic audience at the planned three-hour rally. "America today begins to turn back to God. For too long, this country has wandered in darkness."

"One man can change the world!" he stated, telling members of the audience that they must take up that charge.

Approximately 87,000 people attended the rally, according to a crowd estimate commissioned by CBS News. The estimate was made using aerial photos taken at noon, which was judged to be the height of the event. The estimate has a margin of error of 9,000 people.

Crowds gathered for the event stretched from the Lincoln Memorial all the way to the World War II Memorial. One person held a cardboard cutout of President Obama and asked people what they would tell him, CBS News' Fernando Suarez reports. One man said he'd punch the president in the face, while another said he'd take Mr. Obama to jail.

For the most part, however, the crowd was calm. Beck had asked his supporters not to bring political signs to the event, which was ostensibly non-political (despite the presence of Sarah Palin, among others). Most of the assembled crowd complied, opting for American flags instead of political messages.

Beck, at times near tears, said that heroes like Abraham Lincoln and George Washington had disappeared from American life, but that the next generation of those heroes were in the crowd, and were the children of those who had come to an event he had compared to Woodstock.

Palin, speaking near the start of the event, said, "We stand today at the symbolic crossroads of our nation's history."

"May this day be the change point," she said. "Look around you. You're not alone. You are Americans!"

Sarah Palin at Glenn Beck Rally: "We Must Restore America!"

Beck would go on to oversee the awarding of the "badge of merit" to three Americans he cast as modern-day heroes, among them an African-American pastor who called Beck a "servant of God."St. Louis Cardinals Manager Tony La Russa introduced Cardinals slugger Albert Pujols, the recipient of the "badge of merit for hope," who discussed his faith in Jesus.

The event often seemed like a religious service, with a pastors offering prayers and Beck and other speakers peppering their comments and songs with references to God. A large wooden cross could be seen in the crowd, and Beck implored attendees to let their children see them pray.

"This day is a day that we can start the heart of America again, and it has nothing to do with politics, it has everything to do with God," Beck said, arguing that God had been sending Americans "wake-up calls," including the Sept. 11 attacks.

"We must be better than what we've allowed ourselves to become," he said. "We must get the poison of hatred out of us...we must look to God and look to love."

A Mormon, Beck asked attendees to tithe ten percent of their incomes and said it is "my joy and my honor" to do so.

In addition to "restoring honor," the event was designed to honor members of the military, which Beck said was one of the few institutions that Americans continue to trust.

"Our fighting men and women do the things that most of us don't even want to think about," he said, before introducing speakers from (and asking for donations in support of) the Special Operations Warrior Foundation.

Al Sharpton was hosting a much smaller "Reclaim the Dream" counter-rally as the Beck rally went on at the Lincoln Memorial. Sharpton told CBS News yesterday that Beck is trying to "hijack" the civil rights movement.

Near the World War II memorial, a few protesters stood holding signs protesting Beck's rally. One sign said, "Glenn Beck is a F'king Racist. Another said, "DC Does NOT Hate." Beck has suggested that President Obama is a racist.

Another protester holding a sign deeming King a "dream" and Beck a "nightmare" got into a screaming match with a Beck supporter who said she is tired of living under communism.

Beck said King's dream was the dream of all Americans. Though the audience at the event was overwhelmingly white, many of the speakers were African-American, including a woman who sang a song about unity.

Beck insisted he is not a "fearmonger" as, he noted, some have suggested. He said that while he talks "about frightening things," he is no different than the man on the Titanic who first saw the iceberg and yelled out a warning.

Beck read Lincoln's Gettysburg Address at one point and repeatedly invoked the Founding Fathers in his remarks. He said he and the assembled crowd were standing on "a great battlefield with warriors on each side."

"America is at a crossroads, and today we must decide, 'Who are we? What is it that we believe?'" Beck said. "We must advance or perish. I choose advance."

Beck said that the event will be "meaningless" if the "wake-up call" he was offering fades after the day ends. But if people let the day be a turning point, he said, "we will change the world."

"It is time to start the heart of this nation again and put it where it belongs - our heart with God," said Beck. He added: "The truth will set you free."