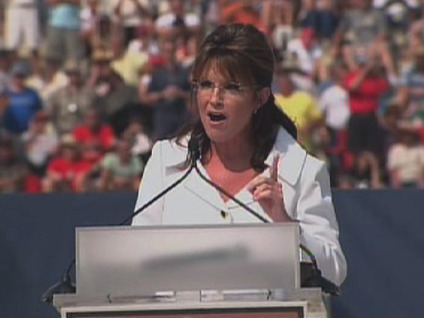 Sarah Palin told an enthusiastic crowd at Glenn Beck's "Restoring Honor" rally in Washington Saturday, "We stand today at the symbolic crossroads of our nation's history."

"May this day be the change point," she said. "Look around you. You're not alone. You are Americans!"

"You have the same steel spine and the moral courage of Washington and Lincoln and Martin Luther King, Jr.," Palin added.

She said it was "humbling" to be with the "patriots" who had gathered for the rally, people who understand "to never retreat."

"We must restore America and restore her honor!" she said.

Palin's speech did not explicitly get into partisan politics, in fitting with Beck's claim that the event was apolitical. She focused in large part on hailing the military as a "force for good," and said soldiers have maintained American honor.

"If you look for the virtues that have sustained our country, you will find them in those who wear the uniform," she said, admiringly introducing three military veterans.

She told the audience she was speaking not as a politician but as mother of a soldier. "Say what you want to say about me, but I raised a combat vet, and you can't take that away from me," Palin said.

Palin said Americans will always be successful because they are guided by grace.

"We will always come through, we will never give up and we shall endure," the former Alaska governor said as a "U-S-A" chant broke out.