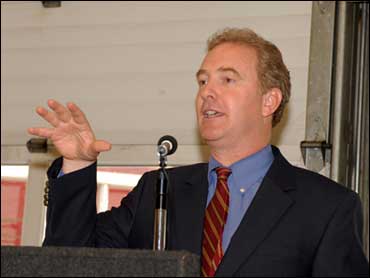 "It's blatantly political. I mean, come on," Van Hollen said at an event on House midterm elections at the National Press Club in Washington.

Van Hollen predicted that Americans will be turned off by the "outrageous rhetoric on the right."

"Conspiracy theories, rants -- there's certainly an element of the electorate that's charged up by that," Van Hollen said. "But, again, I think it's a turnoff to the sensible center and the people who constitute the key independent voters in the swing districts."

Democrats are depending on that theory in their fight against GOP candidates running against incumbent Democrats this year, calling many way out of the mainstream.

The ideological bent of Republicans is one of three reasons Van Hollen predicted that Democrats will keep control of the House of Representatives come November. The second is that Americans want to continue to move forward and don't want to return to the "failed Bush policies" of the past that ended with the near economic collapse in 2008. And the third is that Democrats are running strong campaigns. Members knew 2010 would be a tough year for Democrats, he said, and started preparing for that reality right after President Obama's election.

"Congressional Republicans inside the beltway are already popping the champagne bottles saying that they're going to seize control of the United States Congress" Van Hollen said. "It is a premature celebration."

Van Hollen pointed to recent pollsfinding that while Americans aren't crazy about either party right now, they "consistently have greater confidence in the Democrats than the Republicans."

Political pundits and prognosticators suggest that the "enthusiasm gap" could be Democrats biggest problem in November. The Republican base, polls suggest, is energized and more likely to turn out to vote while Democrats might just stay home.

"There's no doubt that there's political energy that will boost turnout," Van Hollen said, referring to voters coming out for Republicans. "The mistake that they're making is to conclude that by the end of the day you will not have a strong Democratic turnout."

Van Hollen pointed to the special election in Pennsylvania's 12th district where a Democrat won despite predictions that the party faithful would not show up to vote.

Van Hollen also said Democrats are already knocking on doors to get voters out, with a big push this weekend where DCCC and Organizing for America volunteers plan to canvas neighborhoods across the country and knock on 400,000 doors.

"Chris Van Hollen can try to spin it all he wants," NRCC spokesman Ken Spain said in a statement. "But the fact remains that now even senior strategists within his own party are openly admitting that Nancy Pelosi's grip on the Speaker's gavel is loosening by the day. Democrats are right that knocking on doors is an important aspect of grassroots campaigning, but a fatally flawed message and an unpopular agenda won't keep the Ghost of Democrat Majorities Lost from knocking on theirs."