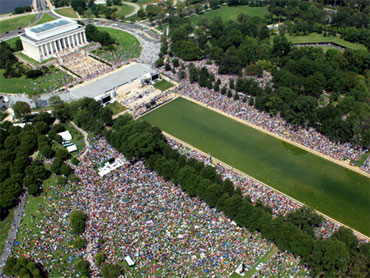 An estimated 87,000 people attended a rally organized by talk-radio host and Fox News commentator Glenn Beck Saturday in Washington, according to a crowd estimate commissioned by CBS News.

The company AirPhotosLive.com based the attendance on aerial pictures it took over the rally, which stretched from in front of the Lincoln Memorial along the Reflecting Pool to the Washington Monument. Beck and former Alaska Gov. Sarah Palin spoke at the rally.

Beck, who predicted that at least 100,000 people would show up, opened his comments with a joke: "I have just gotten word from the media that there is over 1,000 people here today."

AirPhotosLive.com gave its estimate a margin of error of 9,000, meaning between 78,000 and 96,000 people attended the rally. The photos used to make the estimate were taken at noon Saturday, which is when the company estimated was the rally's high point.

Rally organizers had a permit for crowd of 300,000. Crowd estimates used to be provided by the National Park Service, but the agency stopped counting crowds in 1997 after being accused of underestimating the size of the Million Man March in 1995.