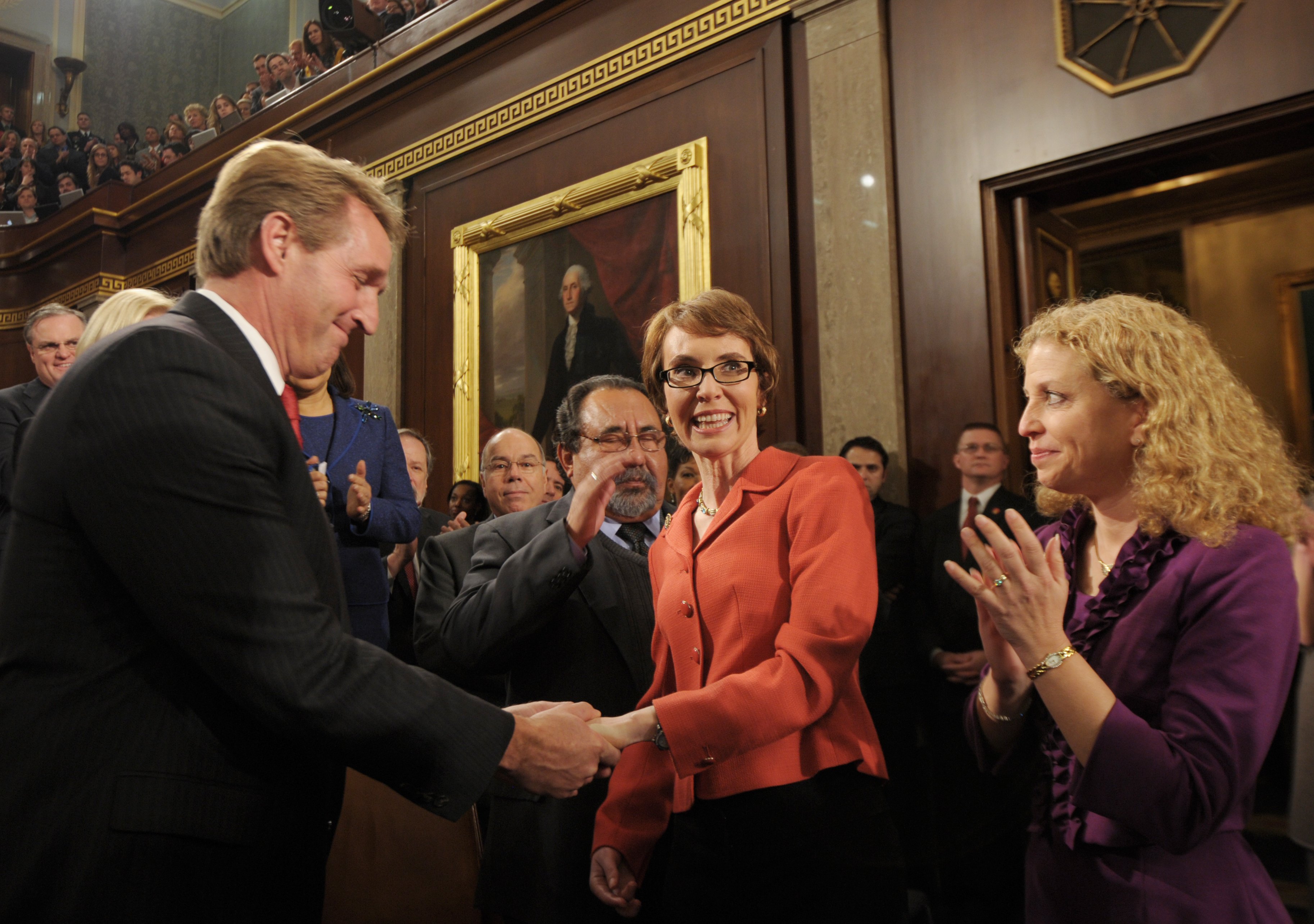 WASHINGTON - In a bittersweet farewell, Rep. Gabrielle Giffords accepted bags of chocolates and a big presidential hug as she claimed her seat one last time in the House of Representatives Tuesday night.

Giffords, who has regained much of her ability to speak and walk after a gunshot wound to the head Jan. 8, 2011, will leave Congress this week to focus on her recovery. But first, she wanted to attend the State of the Union she was forced to miss last year in the uncertain days after the shooting.

Just before President Barack Obama was to speak at 9 p.m. EST, Giffords quietly entered the chamber under her own power and made her way the few steps to a seat that had been reserved for her. Hug No. 1 came from friend Debbie Wasserman Schultz of Florida. Giffords' colleagues stood and gently applauded her.

"Gabby! Gabby!" some of them chanted.

At Ariz. event do-over, admiration for Giffords
What Gabby Giffords teaches us about leadership
Giffords gets hug and kiss from Obama at speech

Limping a little, Giffords beamed around the chamber and raised her left hand to wave. Rep. Louis Gohmert, R-Texas, approached with two bags of chocolate, which Giffords took, grinning.

She looked to the gallery to wave at her husband, astronaut Mark Kelly. When First Lady Michelle Obama took her seat next to him, she waved, too.

The president himself swooped in with a big bear hug around Giffords' tiny frame, grinning widely before climbing to the rostrum for the speech. (Watch the encounter at left.)

Giffords' presence may be the only element about the event above politics.

Obama used the highest-profile pulpit in the land to reclaim the spotlight from Republicans battling for the right to face him in the general election. He was speaking to a Congress cranky after a year of the most bitter partisan fighting in recent memory and the public's widespread disapproval.

He's weaving a narrative about economic fairness and taking subtle shots at Republican hopeful Mitt Romney, a multimillionaire who released his tax return for 2010 and an estimate for 2011 earlier in the day. Republican leaders pre-labeled Obama's blueprint a "pathetic" rehash.

The political subtext seems trivial compared to the real and wrenching journey Giffords has traveled from the "Congress on Your Corner" event a year ago in Tucson that turned violent and changed everything for her to the House chamber Tuesday night. The shootings left six dead, Giffords recovering from a bullet wound to the head and 12 others injured.

The prospect of the Arizona Democrat taking her seat Tuesday night is an emotional milestone for many on Capitol Hill. Last year, her colleagues left it empty in her honor, a visual symbol of the difference between real tragedy and Washington melodrama.

She has since regained a halting ability to speak and walk on her own. She was so disgusted about the way Congress was handling the debate over whether to raise the nation's debt ceiling in August that she made a surprise appearance in the House chamber to cast her vote.

The House gave her a standing ovation and sustained applause, one of the rare bipartisan moments in Congress last year.

Circling back to the beginning of her ordeal, Giffords was in Tucson Monday finishing the meeting she started on the morning she was shot, and bidding farewell to constituents who have supported her through her recovery.

She met in her office with other survivors of the shooting rampage, including Suzi Hileman, who was shot three times while trying to save her young friend and neighbor, 9-year-old Christina-Taylor Green. The little girl died from a gunshot wound to the chest.

And In her last act in Tucson as a congresswoman, Giffords visited one of her favorite charities, the Community Food Bank of Southern Arizona.

The food bank established the Gabrielle Giffords Family Assistance Center with $215,000 it received in the wake of the shooting. The center has helped 900 families get on food stamps in the last year and offered guidance to needy families seeking assistance with housing, insurance, clothing and other basic needs.

Giffords and Kelly then jetted Monday night to Washington, her spokesman said, and spent a quiet day before the big speech and her farewell.

She is expected Wednesday to vote on one last bill, a measure she co-authored to impose tougher penalties on smugglers who use small, low-flying aircraft to avoid radar detection and bring drugs across the Mexican border.

The woman whose improbable recovery has captivated the nation hinted that her departure from public life might be temporary. She promised in a tweet: "I will return & we will work together for Arizona & this great country."