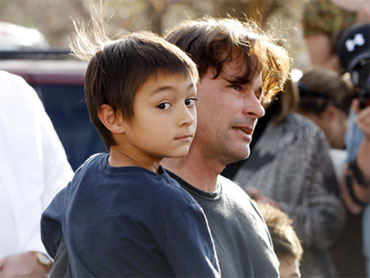 Little Falcon Heene of "Balloon Boy" fame surely had no idea he was encapsulating an entire year of popular culture when he told his parents on national TV: "You guys said that we did this for the show."

Seeking fame is nothing new for Americans - after all, it was back in 1968 that Andy Warhol first postulated that everyone would get 15 minutes. What distinguished Heene's parents, or famous party crashers Tareq and Michaele Salahi, was how they were seeking it: They wanted a reality show. (Fifteen minutes plus commercials, give or take.)

Reality TV has been around for a decade, but this year the genre seemed to seep into our popular culture in occasionally uncomfortable ways. It also gave birth to some of the year's biggest stars: Golden-voiced Susan Boyle, who warmed middle-aged hearts everywhere, and Adam Lambert, who warmed some of them.

And then there were the people who earned fame, or infamy, the old-fashioned way in 2009: Gov. Mark Sanford, Tiger Woods, Kanye West, Rep. Joe Wilson.

But we're getting ahead of ourselves. Without further ado, our chronological journey through some of the top pop culture moments of 2009:

JANUARY: Yes, a new president is inaugurated in Washington, ensuring at least four years of hipper guests in the White House and cultural ramifications too profound to contemplate. But seven days later in California, one of the year's truly peculiar stories is born, literally: Nadya Suleman, bearing a disconcerting resemblance to Angelina Jolie, gives birth to octuplets, which expand the single mom's brood to 14 and earn her the moniker "octomom." By year's end she is denying reports that she's planning - what else? - a reality show, with - who else? - newly single reality dad Jon Gosselin. More on him later...

On a happier note, 57-year-old U.S. Airways pilot Chesley "Sully" Sullenberger saves a planeful of passengers when he glides his disabled aircraft into the Hudson River, a feat that will garner him rock-star status (and, he'll say later, rock-star sex.)(With his wife.)

Photos: Plane Down in the Hudson

FEBRUARY: Star Olympic swimmer Michael Phelps is caught in a tabloid photo smoking from a marijuana pipe. Sponsor Kellogg Co. drops him, but he largely survives - and in the summer, following a three-month competition ban, he's the new face of the Subway sandwich chain. Tiger Woods should be so lucky. More on him later...

MARCH: Surprise! Bristol Palin confirms she's done with Levi Johnston, and experts, who note that most teen pregnancies end in broken relationships, hope it can be a teachable moment. Pop singer Rihanna is shockingly beaten by her boyfriend, singer Chris Brown, and initially returns to him, prompting dismay from everyone from Ellen DeGeneres to Oprah Winfrey. Later Rihanna leaves Brown and becomes a voice against domestic violence.

APRIL: Americans feed their longtime fascination with pirates when a real-life pirate saga unfolds in the seas off Somalia. A Washington magazine puts a shirtless President Barack Obama on its cover - a long-lens paparazzi shot from a Hawaii vacation - and people ask if the presidential pecs, however buff, are appropriate fodder for a magazine cover. But the real star of the month is Susan Boyle, a plain-looking woman of 48 from Scotland who stuns the world with her rendition of "I Dreamed a Dream" on "Britain's Got Talent." She's an instant icon for anyone who has ever, well, dreamed a dream. More on her later ...

MAY: In a new book, Elizabeth Edwards relives the pain of her discovery that her husband cheated. An excruciating interview with Oprah Winfrey - especially John Edwards' uncomfortably smiling face - is unwatchable and addictive all at once. Adam Lambert takes "American Idol" by storm (the actual winner is Kris... who?) The glam rock singer with the banshee wail, guyliner and black nail polish comes out as gay after the show is over, surprising none. And the Bravo network announces it's planning a Washington, D.C. version of the popular "Real Housewives" franchise. More on that later ....

JUNE: Michael Jackson's stunning, premature death at 50 becomes one of those "Where were you when?" moments, and leads to a frenzied renewal of interest in his life, music and dance moves, even for little kids. Gov. Mark Sanford of South Carolina puts his bizarre and indelible stamp on the common tale of the straying politician, going AWOL for five days as he trysts with a lover in Argentina. His flowery declarations of love and endless self-analysis fascinate the nation - almost as much as Jon and Kate Gosselin do when they announce they're splitting. The reality duo appear on so many magazine covers that one celeb mag offers a "Gosselin-free" issue - a clear sign that reality stars have displaced former tabloid fixtures like Britney Spears and Paris Hilton (who?).

JULY: Sarah Palin, long a crossover star between the worlds of politics and pop culture, resigns as governor of Alaska, a move that baffles many but frees her to spend time on her upcoming book, "Going Rogue." And there is a rare and fascinating sighting at Jackson's star-studded memorial service in Los Angeles: 11-year-old Paris Michael Jackson, previously only seen in paparazzi shots, her face covered by a veil. "Ever since I was born, Daddy has been the best father you could ever imagine," she says into the microphone. A child who had seemed, with her siblings, a mere oddity is revealed to be a lovely, self-possessed young girl.

AUGUST: Chilling news for reality television: Ryan Jenkins, known as a sweet-talking contestant on VH1's "Megan Wants a Millionaire," hangs himself days after his ex-model wife's body is discovered, mutilated and stuffed into a suitcase. The case of Jenkins, who had been charged in the death, leads to calls for stricter background screenings of reality show contestants.

SEPTEMBER: What do a South Carolina congressman, a bad-boy rap singer and the world's top women's tennis player have in common? They are all really rude in September. For Serena Williams, it's a profane outburst at a lineswoman - unfortunate but much more common than, say, heckling a sitting president as he addresses Congress. Rep. Joe Wilson's outburst - "You lie!" - has historians scratching their heads for comparisons. As for Kanye West, his ill-received dissing of Taylor Swift at the VMAs leads to some emotional self-analysis on the couch - Jay Leno's couch.

OCTOBER: Andre Agassi had so cleaned up his bad-boy image over the years that it's a shock to hear him admit, in a new book, that he used crystal meth, lied to wriggle out of a failed drug test, and even hated tennis. But this is really the month of Richard Heene's brazen and misguided attempt to use his 6-year-old son as a means to a reality show gig. The nation is unified and transfixed as it watches the silver balloon, perhaps carrying Falcon, float across Colorado. Then it's disgusted.

NOVEMBER: What a month in pop culture. Ordinarily we'd give it to Palin for the enormity of the crowds at her book tour. Or to Winfrey, who announces she's leaving her talk-show perch - well, in 2011 - for unspecified ventures in cable. Or to Lambert again, whose over-the-top sexual gestures at the American Music Awards anger ABC and many fans.

But no, this month belongs to a socialite couple from Virginia, Tareq and Michaele Salahi, who manage to breach vaunted White House security with no weapons other than very nice clothes and a heavy dose of social ambition. Michaele had been in the running to be a "real housewife" on Bravo. Something tells us she doesn't need the publicity now.

Four days after the state dinner debacle, a strange accident happens in an upscale Florida gated community. Golfer Tiger Woods drives into a fire hydrant and a tree...

DECEMBER: And the fallout seems to know no bounds, as tabloids come out with new reports daily of women claiming to have had sex with the golfer, including at least one former reality cast member. Weeks after the accident, Woods remains out of sight, trying to salvage his marriage and image.

But things are sure looking good for Boyle, whose album, "I Dreamed a Dream," debuts at No. 1. And that's not all - her YouTube videos from the show are the most-watched all year, with more than 120 million views. Coming in second: that little boy who's just left the dentist and is feeling a bit woozy.

The 7-year-old star of "David After Dentist" then asks his Dad a rather prescient question for the age of reality TV:

"Is this real life?"