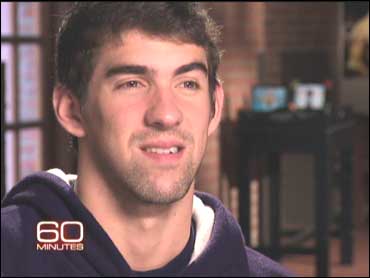 Michael Phelps' day grew lousier by the hour on Thursday.

First he lost a major sponsor, then he got suspended.

The Olympic great was suspended from competition for three months by USA Swimming, the latest fallout from a photo that showed him inhaling from a marijuana pipe.

The sport's national governing body also cut off its financial support to Phelps for the same three-month period, effective immediately.

CBS News correspondent Michelle Gielan reports that Phelps resumed training in Baltimore this week, and he spoke briefly to reporters there about his suspension.

"I clearly made some bad, you know, bad judgments and mistakes in my life and I think the best thing is to learn from your mistakes," said the swimming champion. "I'm happy to be back in the water and that's a place where I feel at home and feel comfortable."

In a statement, the Colorado Springs-based USA Swimming federation said Phelps suspension "is not a situation where any anti-doping rule was violated, but we decided to send a strong message to Michael because he disappointed so many people, particularly the hundreds of thousands of USA Swimming member kids who look up to him as a role model and a hero."

"Michael has voluntarily accepted this reprimand and has committed to earn back our trust."

Phelps won a record eight gold medals in Beijing and returned to America as one of the world's most acclaimed athletes. He made headlines of a different kind, however, in the wake of the photo, published Sunday by News of the World, a British tabloid.

Earlier Thursday, cereal and snack maker Kellogg Co. announced it wouldn't renew its sponsorship contract with Phelps, saying his behavior is "not consistent with the image of Kellogg." The swimmer appeared on the company's cereal boxes after his Olympic triumph.

"Michael accepts these decisions and understands their point of view," said one of his agents, Drew Johnson. "He feels bad he let anyone down. He's also encouraged by the thousands of comments he's received from his fans and the support from his many sponsors. He intends to work hard to regain everyone's trust."

Phelps' coach, Bob Bowman, said he believes Phelps will emerge from the experience a stronger swimmer and person.

"Michael's been through a lot and he's learned a lot, hopefully," Bowman told The Associated Press during a telephone interview. "I support him and I want to see him do better. I'm here, as always, to try to help him move forward. He's learned some tough lessons and he's disappointed a lot of people, me included."

Phelps has acknowledged "regrettable" behavior and "bad judgment." He didn't dispute the authenticity of the photo, reportedly taken at a house party while Phelps was visiting Columbia, S.C., in November during an extended break from training.

"I certainly understand USA Swimming needed to take action," Bowman said. "We will certainly abide by everything they've put down."

USA Swimming provides a $1,750 monthly stipend to national team members to help defray travel and training expenses, plus performance bonuses. However, it's a small percentage of the millions Phelps makes through endorsements.

The 23-year-old has resumed training in his hometown of Baltimore, but his plans to return to competitive swimming will have to be put on hold. Phelps had planned to compete in early March at a Grand Prix meet in Austin, Texas.

Now, he won't be able to compete until early May, which would give him a little more than two months for some racing before July's world championships in Rome.

"This is the result of a poor decision Michael made," U.S. Olympic Committee spokesman Darryl Seibel said in an e-mail. "He understands there is accountability and has pledged to not repeat this in the future. We have offered our assistance to make certain he is as consistent and successful away from the pool as he is in it, and we are confident that will happen."

After the suspension, Phelps would be able to compete at a May meet in Charlotte, N.C.; there's another Grand Prix competition in Santa Clara, Calif., the following month. The U.S. team for Rome will be chosen at the national championships, which begin July 7 in Indianapolis.

"He's been very good in practice," Bowman said. "I think he feels good to be back in the water. Certainly, he's not in very good shape.

"We're anxious to get back to a really normal routine and we have. We're moving on."

Several of Phelps' Olympic teammates rallied to his defense. Among them was Dara Torres, the 41-year-old silver medalist whom Phelps jokingly referred to in Beijing as "Mom."

"I see him as a kid trying to grow up in the most intense spotlight known to any athlete. He has apologized and what else can he do?" she told the AP by telephone. "The thing I hope is that people realize Michael is still a person and not just a swimming hero."

Torres said she sent Phelps a text a few days ago to extend her support.

"He didn't let the USA down at the games, so we shouldn't let him down," she said.

Torres doesn't expect a three-month suspension in a non-Olympic year to have much affect on Phelps' career. He intends to keep swimming through the 2012 London Games.

"Knowing Michael the way I do, I guarantee you it's going to make him want to do well," Torres said. "All this is going to do is light a fire under him."

Amanda Beard compared Phelps' ordeal to some of the disdain she faced after posing nude in Playboy magazine before the Beijing Games.

"If anyone knows public scrutiny, it's me," the four-time Olympian said in a text message. "When I posed for Playboy, so many officials looked down on me. Michael knows he isn't a bad person. He made a mistake. People need to get over it. I want to cheer him on in London."

Gold medalist Ryan Lochte, who was one of Phelps' teammates and main rivals in Bejing, said: "It really is kind of harsh. It's just a picture."

And even a rival agent came to Phelps' defense.

"Enough is enough," said Evan Morgenstein, who represents a large number of Olympic swimmers. "The penalty is far greater than the crime. He has said he is sorry. Let's move on to the real problems in this country."