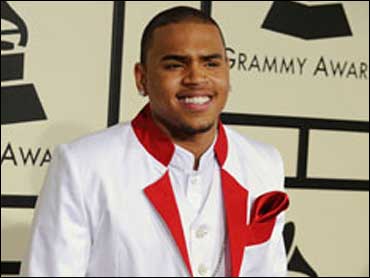 The 19-year-old R&B singer, wearing a gray suit, appeared in a Los Angeles courtroom Thursday alongside his attorney.

Brown had been charged hours earlier by Los Angeles County prosecutors with felony assault likely to cause great bodily injury and making criminal threats. He was arrested nearly a month earlier after police said he was involved in an early morning altercation with a woman who identified the "Run It!" singer as her attacker.

A source familiar with the situation has identified the woman as Brown's girlfriend, fellow music star Rihanna.

The 21-year-old "Umbrella" singer was not present in court Thursday but was represented by an attorney.

If convicted, Brown could be sentenced to probation or nearly five years in prison.

A police affadavit detailing the fight obtained by the Smoking Gun Web site gives this account of how it developed:

The fight began as the couple was driving in an upscale Los Angeles neighborhood in Brown's rented Lamborghini. A woman described in the affadavit as Robyn F (Rihanna's full name is Robyn Rihanna Fenty) picked up Brown's cellphone and saw a text message from a "woman he had had a previous sexual relationship with." A fight ensued, and Brown pulled the car over and tried to push Robyn F out of the car. But she was wearing her seatbelt. He then pushed her face into the window, and continued to beat her as he resumed driving. Robyn F's mouth filled with blood and spattered her face and clothes. Robyn F placed a call to her personal assistant, and got her answering machine. She pretended to talk to the assistant and told her to make sure the police were there when she got home. This angered Brown more and he said he was "going to kill her." Robyn F doubled over her lap with her arms around her face to protect herself from the blows, and suffered bruises on her arms and back. She tried to call another personal assistant and Brown grabbed her phone and threw it out the window. He also bit her on the ear and put her in a headlock, causing her to partially lose consciousness. She then pushed her back against the passenger door and used her legs to push Brown away. She began screaming for help and he pulled the car over and walked away from the car. A resident of the neighborhood heard her screams and called police. Brown later called Robyn F's assistant to find out if she had spoken to police and given them his name, and the assistant told him yes.

Rihanna's spokesperson had no comment on the charges filed against Brown.

Fans as well as friends and fellow celebrities voiced concern earlier this week at reports that the two young singers had reconciled.

According to tabloid reports, the couple made up after Brown called Rihanna on her 21st birthday, and spent time together at the Florida mansion of media mogul Sean "Diddy" Combs.

Counselors and relationship experts say this is not unusual in cases of domestic violence.

Neither singer has performed publicly since the Feb. 8 incident, and right after the headlines appeared, Wrigley announced it was suspending an ad campaign featuring Brown plugging Doublemint chewing gum.