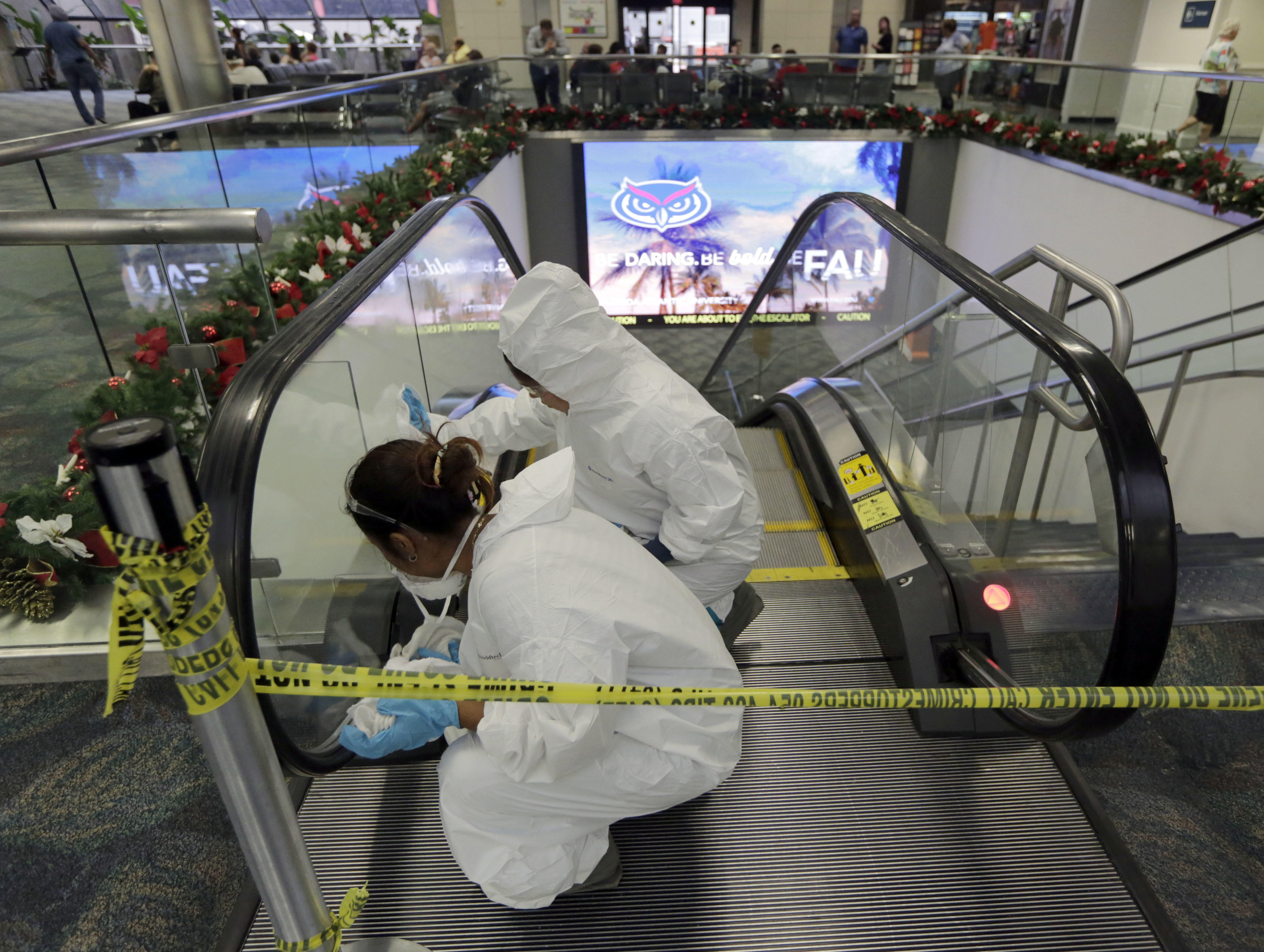 Santiago, a 26-year-old Iraq war veteran from Anchorage, Alaska, is charged with committing violence against people at an international airport resulting in death and with two firearms offenses. The hearing Monday is only the beginning of what will likely be a lengthy journey through the federal court system following the shooting at Fort Lauderdale-Hollywood International Airport that killed five people and wounded six others.

Before the hearing, TMZ published a video on Sunday that appears to show the seconds leading up the shooting and the violence as it started to unfold. It shows a gunman pulling out a weapon as he walks through baggage claim, and people running and ducking for cover.

Officials have not confirmed the veracity of the video. TMZ has not said where nor how it obtained the video.

(WARNING: Some viewers may find the video’s contents disturbing.)

Here is where things stand and what to expect:

What will happen at the first hearing?

U.S. Magistrate Judge Alicia Valle will ask if Santiago understands the charges against him and determine whether he has an attorney or needs one appointed for him at taxpayer expense. In the federal system, defendants must be charged via a grand jury indictment unless they waive that right. So beyond legal representation not much else will happen until that indictment is issued. Most likely Santiago will continue to be held without bail.

How likely is the death penalty?

Although the charges carry a potential death sentence, the Justice Department will decide later whether to pursue that penalty assuming Santiago is convicted. Many other issues can come into play, such as whether he decides to plead guilty or go to trial. Guilty pleas usually do not result in death sentences. The airport violence charge allows a sentencing judge wide latitude in deciding how many years behind bars he might serve, all the way up to life in prison, if the death penalty is off the table.

Does Santiago have a defense?

Uphill at best. There are dozens of witnesses to the shooting and the FBI said in an affidavit that he told agents in a post-arrest interview how he planned the attack, what weapon he brought with him to Florida, how he loaded the gun from his checked luggage in an airport bathroom and came out firing. There is also video surveillance of the shooting that shows the shooting and its aftermath. Santiago was arrested after running out of ammunition and lying spread-eagle on the floor until a deputy took him in to custody, his 9mm handgun nearby.

What about mental issues?

Santiago’s attorney can ask for a mental competency evaluation to determine if he is fit to stand trial. It’s a fairly high standard for any defendant to escape criminal charges because of mental problems because many defendants understand the difference between right and wrong. The main issue for the court is whether a defendant is too impaired to assist in his own defense. Most defendants who go this route are ultimately judged fit for trial and the mental health issue becomes a major factor at sentencing.

They could. So far the case against Santiago is proceeding in the federal system. Theoretically the state could charge Santiago with five counts of first-degree murder - again punishable by death - as well as multiple counts of attempted murder and many other charges. Broward County’s chief prosecutor, Michael Satz, so far has not indicated one way or another if he will pursue a separate case. Because of several Supreme Court rulings, Florida’s death penalty system is currently in limbo.

If terrorism links are found, then what?

Federal prosecutors could obtain a new grand jury indictment charging Santiago with terror-related offenses, either adding them to the existing charges or substituting them. So far, FBI agents have said they have uncovered no evidence linking Santiago to international terrorism. He did tell authorities in Alaska, however, that U.S. intelligence agencies were directing him to take orders from the Islamic State of Iraq and Syria (ISIS).