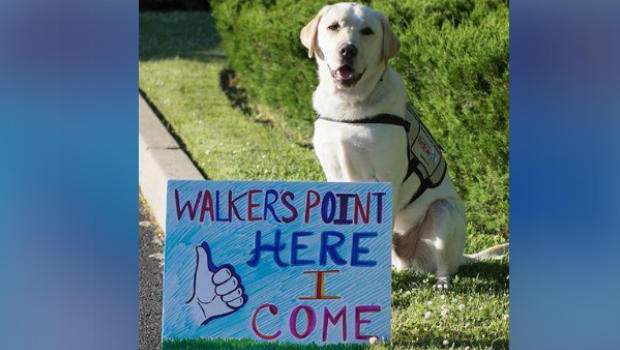 The lab will assist former President George H.W. Bush in his day-to-day life. "More than anything else, the dog will be a wonderful companion," aide Evan Sisley told The Associated Press.

Mr. Bush, who celebrated his 94th birthday in June, has used a wheelchair since developing a form of Parkinson's disease, reports the AP. He's also been hospitalized several times recently for various conditions.

Sully isn't a regular dog, though. He's gone through serious coaching. The pup was trained by the Guide Dog Foundation and America's VetDogs, a nonprofit that provides veterans, active service members and first responders who have disabilities a service dog for free, according to its website. The dogs are trained to help their owners cope with various disabilities, ranging from blindness to PTSD.

Sully is named after Chesley "Sully" Sullenberger III, the airline pilot who was heralded as a hero after he landed a plane on the Hudson River in 2009, saving everyone on board. The incident came to be dubbed "The Miracle on the Hudson."

The pooch already has an active Instagram account, @sullyhwbush, which will have daily photos from Sully's life. But, notes CNN, the account isn't just for fun-- it will highlight the importance of service dogs for people living with disabilities.

Mr. Bush tweeted about the new arrival -- and a fellow former president who was there on the happy occasion: