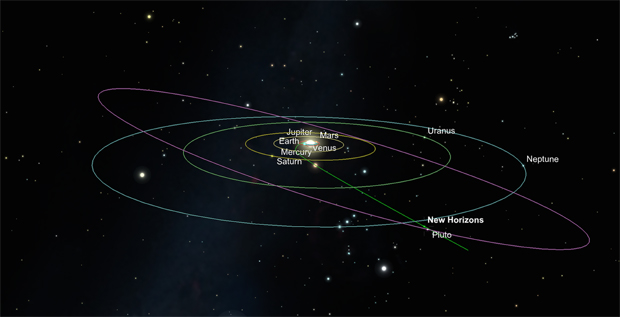 Want to know how far away NASA's New Horizons probe is from Pluto and when it will make its closest approach? Interested in seeing the view from the spacecraft as it races past the dwarf planet and its large moon Charon at more than 30,000 mph? Curious where Pluto is in the night sky from your backyard?

There's an app for that.

Pluto Safari, designed by Simulation Curriculum Corp. (free for iOS and Android devices), offers one-stop shopping for armchair astronomers and Plutophiles. It's an easy to use yet elegant program for smartphones and tablets built on the same powerful routines that drive the company's sophisticated Sky Safari 4 planetarium software.

As of late June, the app had been downloaded more than 60,000 times. Company officials hope the total will reach 100,000 by July 14, when New Horizons makes its historic flyby.

"We knew that New Horizons was going to fly past Pluto in July and we were thinking, what can we do? This is such a unique opportunity, not since the Voyager missions has there been a space exploration mission like this," said Pedro Braganca of Simulation Curriculum. "Can we do anything for our users?"

"And then we started talking, and we came up with why not do an app? Make it free, make it available to everyone, don't create any barriers, and just try and create excitement about space exploration and the New Horizons mission. We're just super excited about it."

The Pluto Safari app provides a news reader with the latest NASA updates and photos, historical background, an interactive timeline of major mission events and a suite of interactive maps that can draw the sky from a variety of perspectives, ranging from the user's backyard to the edge of the solar system and all points in between.

News updates and photos can be obtained elsewhere, of course, and NASA's web-based "Eyes on the Solar System" will draw the sky from virtually any location. And it even features a customized "Eyes on Pluto" section that shows the view from New Horizons, including a box showing which instruments will be operating during the flyby and even what they will be looking at.

But Pluto Safari can be carried in one's pocket, allowing for near instant updates as the spacecraft nears its target. A glance at the home screen shows a running countdown to close approach and the current distance from New Horizons to Pluto (tap to toggle between kilometers and miles).

Tapping the Timeline button brings up a sliding timeline of major events starting with New Horizons' launch in January 2006 and extending through the Pluto flyby. At any point along the timeline, one can tap a "view" button to see where the spacecraft was at the time.

The Guide button on the home screen calls up a variety of background materials while the News button provides just that: the latest updates on the mission. There's even a button to view the latest results of an unofficial poll of Pluto Safari users on whether Pluto should be considered a planet. Or not.

But the app's signature feature is its ability to draw the sky from a variety of perspective and to set them in motion at user-defined time intervals. Just tap the Location button on the home screen.

One view shows the outer solar system with the orbits of Jupiter, Saturn, Uranus, Neptune and Pluto defined, along with the trajectory of New Horizons. Tapping a clock icon at the bottom of the screen allows the user to set the chart in motion, moving forward or backward in time at intervals ranging from seconds to years, either continuously or manually one tick at a time.

Two-finger pinch and zoom works with buttery smoothness to zoom in or out of a give sky chart while dragging one finger across the screen allows one to view the scene from virtually any angle.

A solar system close-up view starts out zoomed in on the current positions of Pluto and New Horizons. Another chart shows the view from New Horizons while the Pluto system view shows what an observer near the dwarf planet would see.

Two other sky charts show Pluto's position in the sky as viewed from Earth while a final map shows Pluto and other named bodies orbiting in the remote reaches of the Kuiper belt.

"It's as accurate as we can make it with the data that's available to us," Braganca said. "And so, every time there's a course correction, the orbital elements are updated. ... We'll keep updating the app as new data comes in."

All of the sky charts start up based on the current time and all of them can be set in motion to look at the scene at any time from launch to flyby. And beyond.

The maps are most intriguing on flyby day. Looking at the view from New Horizons, for example, tap the clock icon at the bottom of the screen, select one-day increments and then advance the time to July 14. You can see the time incrementing at the top right of the screen.

Tapping the right-most arrow at the bottom of the screen sets the map in motion with the timer incrementing without pause. At accelerated one-day increments, it's difficult to stop on a precise date, making it easy to zoom through the flyby before you realize it.

But you can manually operate the timer by tapping the next-to-rightmost arrow. Assuming the interval is one day, tapping the next to right-most arrow once will move the clock forward one day and then stop. Tapping it again moves the clock another day ahead (the left-pointing arrows operate in the same way to move time backward).

When the date reaches July 14, reset the timer to one-minute intervals. Then tap your way through the flyby. You can watch Pluto and Charon grow larger and larger until Pluto eclipses Charon and the spacecraft moves behind the two. Dragging to change the perspective, you can look back toward the sun and the inner solar system as New Horizons flies through the shadows of Pluto and Charon.

It's all great fun and educational to boot. And Pluto Safari will live on even after the flyby. Braganca said Simulation Curriculum plans to update the app with close encounter pictures and data that will be downlinked over the next 16 months. And beyond that, the app will support the 2019 flyby of a second Kuiper belt object.

"We'll keep the app going even past the flyby," Braganca said. "We'll keep it going, as long as it takes. We'll follow it to the (next) Kuiper Belt object."