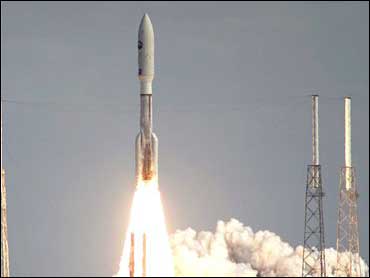 NASA scientists hoped the third time would be the charm for their $700 million unmanned mission to Pluto, and, give or take a half dozen ten-minute delays, it was.

A piano-sized spacecraft blasted off Thursday on a 3-billion mile journey to study Pluto, the solar system's last unexplored planet, and examine a mysterious zone of icy planetary objects at the outer edges of the planetary system.

The New Horizons probe lifted off from the Cape Canaveral Air Force Station at 2 p.m., quickly reaching speeds as it pushed away from Earth of 36,000 mph, nearly 100 times faster than a jetliner.

"We have ignition and liftoff of NASA's New Horizons spacecraft on a decade long voyage to visit the planet Pluto and then beyond," said NASA commentator Bruce Buckingham.

It was the swiftest spacecraft ever launched and was expected to reach Earth's moon in nine hours and Jupiter in just over a year.

The launch came a day after a storm knocked out power at the Maryland-based laboratory that will command the mission, and two days after high winds at Cape Canaveral forced the first postponement.

Elephants use their trunks to console distressed members of their herd

Strong winds in Laurel, Md., knocked out power at the John Hopkins University Applied Physics Laboratory and mission managers were wary of launching the spacecraft without backup power at the facility.

"The air conditioning was off. The flight controllers were sitting there wiping sweat," said Alan Stern, the mission's principal investigator. "If they were dealing with any spacecraft issues, which first day out of the box a lot of spacecraft have, you can't concentrate like that."

Scientists have been working 17 years on the nine-year voyage to Pluto, and they were unfazed by the back-to-back postponements.

To reach Pluto, New Horizons had to launch by Feb. 14 or the flight would have been delayed to next year, reports CBS News Space Consultant Bill Harwood. But Jan. 28 was a better deadline, to take advantage of Jupiter's gravity for a planned 2007 flyby that will boost the probe's velocity by 9,000 mph and get it to Pluto by 2015. After Jan. 28, the arrival date would have begun slipping and by the end of the launch window, an additional five years would have been required to reach the target.

"New Horizons' close encounter with Pluto will last a full day, 12 hours before and after," Harwood said. "The spacecraft cannot enter orbit around the planet because no current rocket can launch a probe carrying enough fuel to arrest the velocity needed to get it there in a reasonable amount of time."

The spacecraft is about the size and shape of a concert piano attached to a satellite dish. It will study Pluto as well as the frozen, sunless reaches of the solar system known as the Kuiper Belt. Scientists believe that studying the region's icy, rocky objects can shed light on how the planets formed.

The launch drew attention from opponents of nuclear power because the spacecraft is powered by 24 pounds of plutonium, whose natural radioactive decay will generate electricity for the probe's instruments.

NASA and the Department of Energy estimated the probability of a launch accident that could release plutonium at 1 in 350. As a precaution, the agencies brought in 16 mobile field teams that can detect radiation, plus air samplers and monitors.

A successful journey to Pluto would complete an exploration of the planets started by NASA in the early 1960s with unmanned missions to observe Mars, Mercury and Venus.

Pluto is the only planet discovered by a U.S. citizen, though some astronomers dispute Pluto's right to be called a planet. It is an oddball icy dwarf unlike the rocky planets of Mercury, Venus, Earth and Mars and the gaseous planets of Jupiter, Saturn, Uranus and Neptune.

Pluto is the brightest body in a zone of the solar system known as the Kuiper Belt, which is made up of thousands of icy, rocky objects including tiny planets whose development was stunted by unknown causes. Scientists believe studying those "planetary embryos" can help them understand how planets were formed.

The New Horizons spacecraft was launched on an Atlas V rocket, NASA's most powerful launch vehicle. Some NASA safety managers had raised concerns about the rocket's fuel tank since a similar test tank failed a factory pressure evaluation. The decision was made to fly since the flight tank was in pristine condition and had no signs of any defects like the ones found on the test tank.