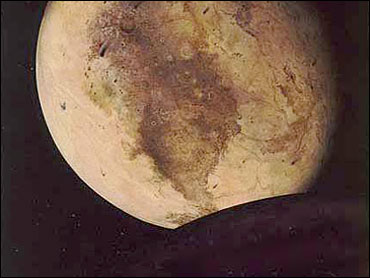 Pluto, beloved by some as a cosmic underdog but scorned by astronomers who considered it too dinky and distant, was unceremoniously stripped of its status as a planet Thursday.

"Pluto is smaller than our moon, not of planetary size," astronomer Sir Patrick Moore told CBS Evening News interim anchor Bob Schieffer. "If we call Pluto a planet, there are others: Xena, Verona, Terran, Ceres — the list is endless. In fact, that makes no sense at all."

The shift will have the world's teachers scrambling to alter lesson plans just as schools open for the fall term.

"It will all take some explanation, but it is really just a reclassification and I can't see that it will cause any problems," said Neil Crumpton, who teaches science at a high school north of London. "Science is an evolving subject and always will be."

Powerful new telescopes, experts said, are changing the way they size up the mysteries of the solar system and beyond. But the scientists at the conference showed a soft side, waving plush toys of the Walt Disney character Pluto the dog — and insisting that Pluto's spirit will live on in the exciting discoveries yet to come.

"The word 'planet' and the idea of planets can be emotional because they're something we learn as children," said Richard Binzel, a professor of planetary science at the Massachusetts Institute of Technology, who helped hammer out the new definition.

"This is really all about science, which is all about getting new facts," he said. "Science has marched on. ... Many more Plutos wait to be discovered."

Pluto, a planet since 1930, got the boot because it didn't meet the new rules, which say a planet not only must orbit the sun and be large enough to assume a nearly round shape, but must "clear the neighborhood around its orbit." That disqualifies Pluto, whose oblong orbit overlaps Neptune's, downsizing the solar system to eight planets from the traditional nine.

Astronomers have labored without a universal definition of a planet since well before the time of Copernicus, who proved that the Earth revolves around the sun, and the experts gathered in Prague burst into applause when the guidelines were passed.

"It's disappointing in a way, and confusing," said Patricia Tombaugh, the 93-year-old widow of Pluto discoverer Clyde Tombaugh.

"I don't know just how you handle it. It kind of sounds like I just lost my job," she said from Las Cruces, N.M. "But I understand science is not something that just sits there. It goes on. Clyde finally said before he died, 'It's there. Whatever it is. It is there."'

The decision by the IAU, the official arbiter of heavenly objects, restricts membership in the elite cosmic club to the eight classical planets: Mercury, Venus, Earth, Mars, Jupiter, Saturn, Uranus and Neptune.

Pluto and objects like it will be known as "dwarf planets," which raised some thorny questions about semantics: If a raincoat is still a coat, and a cell phone is still a phone, why isn't a dwarf planet still a planet?

NASA said Pluto's downgrade would not affect its $700 million New Horizons spacecraft mission, which this year began a 9½-year journey to the oddball object to unearth more of its secrets.

But mission head Alan Stern said he was "embarrassed" by Pluto's undoing and predicted that Thursday's vote would not end the debate. Although 2,500 astronomers from 75 nations attended the conference, only about 300 showed up to vote.

Under the new rules, two of the three objects that came tantalizingly close to planethood will join Pluto as dwarfs: the asteroid Ceres, which was a planet in the 1800s before it got demoted, and 2003 UB313, an icy object slightly larger than Pluto whose discoverer, Michael Brown of the California Institute of Technology, has nicknamed "Xena." The third object, Pluto's largest moon, Charon, isn't in line for any special designation.

Brown, whose Xena find rekindled calls for Pluto's demise because it showed it isn't nearly as unique as it once seemed, waxed philosophical.

"Eight is enough," he said, jokingly adding: "I may go down in history as the guy who killed Pluto."

Demoting the icy orb named for the Roman god of the underworld isn't personal — it's just business — said Jack Horkheimer, director of the Miami Space Transit Planetarium and host of the PBS show "Star Gazer."

"It's like an amicable divorce," he said. "The legal status has changed but the person really hasn't. It's just single again."