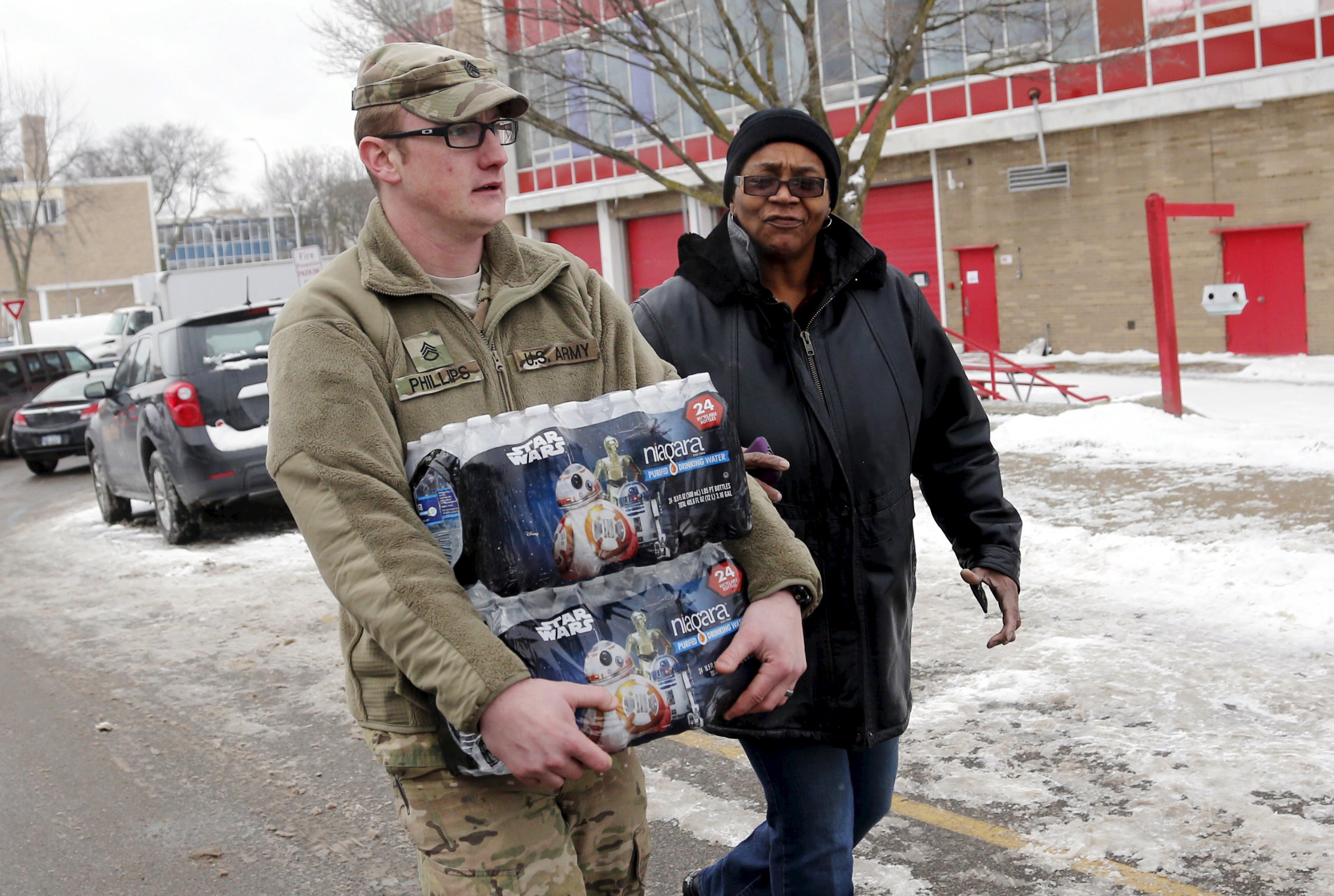 FLINT, Mich. -- Ever since the full extent of the Flint water crisis emerged, one question has persisted: Would this have happened in a wealthier, whiter community?

Residents in the former auto-making hub - a poor, largely minority city - feel their complaints about lead-tainted water flowing through their taps have been slighted by the government or ignored altogether. For many, it echoes the lackluster federal response to New Orleans during Hurricane Katrina in 2005.

Michigan Gov. Rick Snyder has said it's not unfair of his critics to say the Flint water crisis is his Hurricane Katrina, but he's rejecting calls to step down. The EPA's regional administrator who covers Michigan resigned on Thursday evening.

"Our voices were not heard, and that's part of the problem," Flint Mayor Karen Weaver said this week at the U.S. Conference of Mayors meeting in Washington, D.C., where she also met with President Barack Obama to make her case for federal help for her city.

The frustration has mostly been directed at Snyder, who appointed an emergency manager to run Flint. That manager approved a plan in 2013 to begin drawing drinking water from the Flint River, and the city began doing so the next year. But officials failed to treat the corrosive water properly to prevent metal leaching from old pipes.

Snyder, a Republican in his second term, was blasted by Hillary Clinton in her remarks after the recent Democratic presidential debate.

"We've had a city in the United States of America where the population, which is poor in many ways and majority African-American, has been drinking and bathing in lead-contaminated water. And the governor of that state acted as though he didn't really care," Clinton said.

Snyder "had requests for help that he had basically stone-walled. I'll tell you what: If the kids in a rich suburb of Detroit had been drinking contaminated water and being bathed in it, there would've been action."

Flint residents complained loudly and often about the water quality immediately after the switch but were repeatedly told it was safe. They didn't learn the water was tainted until the state issued warnings a year and a half later. Now families fear for their health and especially for the future of their children, who can develop learning disabilities and behavior problems from lead exposure.

Snyder, who has apologized for the mishandling of the situation, declined a request by The Associated Press for an interview Thursday. But in response to Clinton's remarks, he said the former secretary of state should not make Flint a political issue.

His staff issued a statement to AP that cited his efforts in urban areas such as Detroit, which also has a large black population. An emergency manager appointed by Snyder led that city through bankruptcy in 2013-14.

"Bringing Detroit back to a solid fiscal foundation has allowed the city to restore services, and we've watched its economy grow, creating jobs and better opportunities," the statement said. Snyder has also "focused on improving education in all our cities, knowing that students need to not just graduate, but graduate with in-demand skills as they compete in a global economy."

When asked Friday on MSNBC's "Morning Joe" whether the Flint disaster was a case of environmental racism, Snyder said: "Absolutely not. Flint is a place I've been devoted to helping. ... I've made a focused effort since before I started in office to say we need to work hard to help people who have the greatest need."

Flint, a city about 75 miles north of Detroit, is the birthplace of General Motors and once had 200,000 residents. In the early 1970s, the automaker employed 80,000 blue- and white-collar workers in the area. Fewer than 8,000 GM jobs remain, and the city's population has dropped to just below 100,000, with a corresponding rise in property abandonment and poverty.

The city is 57 percent black, and 42 percent of its people live in poverty.

The decline of GM jobs "left a lot of people destitute and desperate, and they feel like their voices aren't being heard. It just adds to the frustration," said Phil Rashead, 66, of Flint, who is white.

Paul Mohai, a professor at the University of Michigan in Ann Arbor, has studied environmental burdens and their disproportionate impact on low-income and minority communities since the late 1990s. He said Flint is a classic case of minority and low-income residents confronting an environmental issue and that "it may be one of the biggest environmental justice disasters we've seen in a long time."

"What's kind of clear is that they've been vocalizing their concerns and the response has been rather weak," he said.

Former Flint Mayor Dayne Walling, who lost his re-election bid in November amid the water crisis, said newly released emails by Snyder showed that the governor's staffers disregarded Flint's plight because of the city's demographics.

"There are a number of indications that concerns of Flint's elected leaders and faith and community leaders were being dismissed as political posturing instead of taken seriously as efforts to address very real problems," said Walling, who is white and was first elected mayor in 2009.

Frustrations boiled over at a weekend protest outside City Hall.

Moore also cited deaths from Legionnaires' disease recorded in the Flint area over the past two years and only announced publicly last week by Snyder. The state has not linked them to Flint's waters, but others disagree.