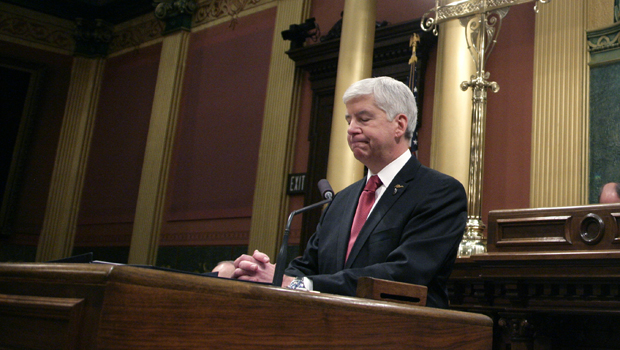 Michigan's governor is under fire over newly released emails about the lead water crisis in Flint.

In a Sept. 25 email to Gov. Snyder, his chief of staff wrote "the real responsibility rests with the county, city and KWA," referring to an area water authority.

Dennis Muchmore continued, "But since the issue here is the health of citizens and their children, we're taking a pro-active approach...."

Just days later, the governor announced the severity of the city's water problem, after he said he received confirmation of the lead contamination.

Flint's former Mayor Dayne Walling -- who lost re-election in November -- said the e-mails were not enough.

"There's too little here to tell," Walling said. "This is missing a whole year and it's missing all the key public officials at the state level who are involved."

When Flint moved its water supply to the Flint River in 2014, the improperly treated water stripped lead from pipes.

The city stopped tapping into the Flint River in October and lead levels have decreased, but during an interview Wednesday with "CBS Evening News" anchor Scott Pelley, Gov. Snyder couldn't say what the current lead levels are.

"I don't have my number at the top of my head of the very latest data. And that varies by parts of the city," Snyder said. "Until they're in a range that is considered safe, I don't actually want to get into the issue..."

President Obama addressed the crisis in an interview with "CBS Sunday Morning," saying, "Once people figured out that there was a problem there and there was lead in the water, the notion that immediately families weren't notified, things weren't shut down -- that shouldn't happen anywhere."

The corrosive river water broken down the protective lining inside of lead pipes. The properly treated water now flowing through the pipes is rebuilding that coating, but some say it could take four to six months.

Everyone in Flint that has spoken to CBS News said they want new pipes and until then, they won't drink the water.