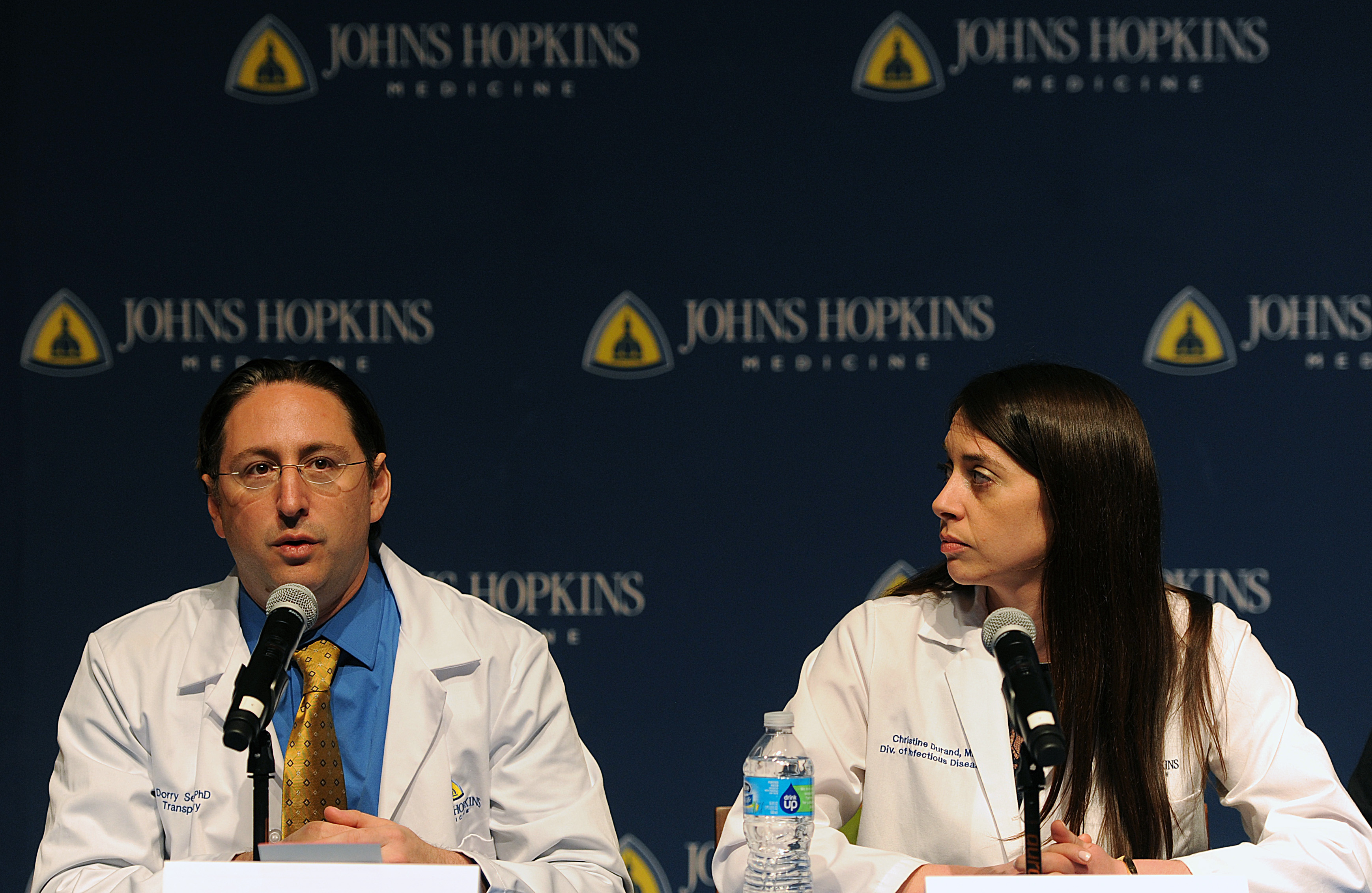 Surgeons in Baltimore for the first time have transplanted organs between an HIV-positive donor and HIV-positive recipients. It's a long-awaited new option for patients with the virus whose kidneys or livers are failing.

Johns Hopkins Medicine announced Wednesday that both recipients are recovering well after one received a kidney and the other a liver from a deceased HIV-positive donor -- organs that ordinarily would have been thrown away because of the HIV infection.

"This could mean a new chance at life," said Dr. Dorry Segev, a Hopkins transplant specialist who pushed for legislation lifting a 25-year U.S. ban on the approach. He believes hundreds of HIV-positive patients may benefit.

"We estimate that about 300 to 500 donors would be available every year for about 1,000 transplants," said Segev.

For patients who don't already have the AIDS virus, nothing changes -- they wouldn't be offered HIV-positive organs.

Instead, the surgeries, performed earlier this month, are part of research to determine if HIV-positive transplants really can help HIV-positive recipients.

The reason: Modern anti-AIDS medications have turned HIV from a killer into a chronic disease that people can live with for decades -- meaning patients may live long enough to suffer organ failure, either because of their HIV or for some other reason.

In the U.S., HIV-positive patients already are eligible to receive transplants from HIV-negative donors just like anyone else on the waiting list. But that list is long. For kidneys, more than 100,000 people are in line, and thousands die waiting each year. There's no count of how many of those waiting have HIV, but Segev said it increases the risk of death while waiting.

If the new approach works, one hope is that it could free up space on the waiting list as HIV-positive patients take advantage of organs available only to them.

"It increases the pool of potential organ donors and allows more people to be transplanted. That's the advantage of this whole thing, but it is a research project so we are going to monitor it very carefully," said Dr. David Klassen of the United Network for Organ Sharing (UNOS), which oversees the nation's transplant system.

Hopkins is the first transplant center given permission to study what's being called HIV-positive to HIV-positive transplants. Two others -- Hahnemann University Hospital in Philadelphia and Mount Sinai Medical Center in New York -- also are approved for the research, according to the UNOS.

Dr. Christine Durand, Assistant Professor of Medicine and Oncology at Johns Hopkins, who spoke with Segev at a press conference, is involved in clinical and transitional research focused on individuals infected with HIV and hepatitis C virus who need cancer and transplant therapies.

Durand said the transplant patients have asked to remain anonymous, but she reported, "Both patients are doing extremely well."

The kidney recipient has had HIV for more than 30 years and was on dialysis, and remained on the transplant list for years. "The surgery went without complication," said Durand.

The liver transplant patient has had HIV for more than 25 years. The patient developed Hepatitis C, which has been cured, but the organ was very damaged. That individual is still in the hospital and expected to be there for a few days.

Durand thanked the donor families, and said, "We are encouraged by these first successful transplants."