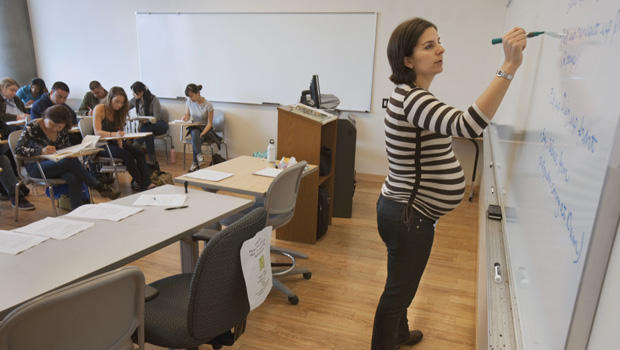 For Michelle Durham it was the perfect job: a paramedic for a national ambulance service in Alabama. She was 22, and her dream of a career in medicine was about to take off, or so she thought.

Then, another reason to celebrate: a baby. "I was only on the truck for six months before I found out I was pregnant with my son," she said. "Went to the doctor and had my visit, and she told me I couldn't lift more than 50 pounds. It's a normal weight restriction for women when you're pregnant."

"And if you can't lift 50 pounds?" asked correspondent Jan Crawford.

"I couldn't even lift the stretcher. It was 100 pounds without a patient on it."

Durham saw it as a temporary hurdle, assuming she could transfer to one of several open desk jobs for a few months. But her employer, Rural/Metro, told her they were reserved for people injured on the job.

Her only option? Twelve weeks of unpaid medical leave that would run out before she even had her baby.

"It was baffling, it really was," Durham said. "To help so many people and then not have help from the company that was hiring you to help these people."

It's a story told hundreds of thousands of times every year across America: you can get the job. Just don't get pregnant

Hacheler Cyrille was a passenger services representative at JFK Airport in New York City. With a six-year-old son and another baby on the way, she was determined to keep working throughout her pregnancy. "I have a son, I have to feed him when he needs something, I have bills to pay," she said.

But one day she stumbled while putting a heavy suitcase on a luggage belt, and got pulled onto it.

"I'm screaming, 'Anybody can hear me? Stop the belt!' I'm thinking about, am I gonna die?" Cyrille said.

She was rushed to the emergency room. She didn't lose the baby. But she said she effectively lost her job. She, too, had asked for a less physically strenuous assignment during the remainder of her pregnancy, but her employer refused to reassign her.

According to Gillian Thomas, a senior attorney with the ACLU's Women's Rights Project, "Roughly a quarter of a million women a year don't get the accommodations they need to keep working."

Thomas said even though the Pregnancy Discrimination Act passed in 1978, from Wall Street to WalMart, pregnant women are still being forced to leave their jobs every day.

Getting pregnant, she said, "really is an economically disastrous decision for many working women.

That's because under the current federal law, while employers are prohibited from firing or refusing to hire pregnant workers, they aren't always required to make any on-the-job accommodations, such as offering more bathroom breaks or temporary desk jobs.

Thomas said, "Between 1997 and 2011, the number of pregnancy discrimination charges filed at the EEOC went up by 50%."

And sometimes it leads to even more tragic consequences.

Coogle worked as a corrections officer at the California Correctional Institution. "I wanted to do things the right way: Go to school, then get the career, and then have the family. And we put things off for a while."

In 2017, after three years on the job, Coogle got the news that she and her husband, Michael, had been waiting for: she was going to have a baby. "Extremely excited, yeah, but then scared," she said. "'Cause then, oh my gosh, now what?"

She spoke with her manager: "She goes, if you bring in any note from your doctor that restricts you, you'll be unfit for duty. You cannot work."

"So, they were willing to make no accommodations whatsoever?" asked Crawford.

Needing to pay the bills, Coogle saw no choice but to keep working. Everything was fine for a while. Then, in her seventh month of pregnancy, a prison alarm goes off. "It's an instinctive run," she said. "And the next thing I know, I'm going down. And immediately felt pain in my lower abdomen."

Coogle went to the ER, where doctors reassured her, thankfully, her baby was OK.

Nine weeks later, she went into labor: "And the doctor's in there and he's lookin' for the heartbeat. And he's over here on my left side. And he says, 'There's no heartbeat.' It didn't occur to me that my baby was gone."

When Coogle fell in the prison yard, she had a placental abruption – her placenta had separated from the uterus. Her baby, Mackenzie, was delivered stillborn.

"They wheeled in the baby, and she's wrapped in a pink blanket, and that's when I found out I had a girl," she said.

The ACLU's Gillian Thomas said, "It really is a Hobson's choice that, frankly, no woman should have to be faced with. A woman who's been told by her physician, 'You have to take the following precautions at work in order to have a healthy pregnancy,' she presents those to her employer and is told, 'No. You either work at full capacity, or you go home.'"

The Supreme Court weighed in on this issue in 2015, ruling in favor of a pregnant UPS employee, Peggy Young, who was denied light duty during the last months of her pregnancy.

But despite that decision, two-thirds of pregnant women asking for accommodations at work have still lost in court.

Thomas said, "I think that there is some unconscious bias there that, because pregnancy is voluntary or a chosen condition, that in some way, it's less deserving."

There's been some progress. Twenty-seven states have passed laws that require employers to offer pregnant women the same accommodations they would make for workers with a disability.

But many say what's really needed is a new federal law.

"Under the 41-year-old law, it's very, very challenging for pregnant women to bring a claim and to prevail to get the support and relief that they need," said Congresswoman Suzanne Bonamici, a Democrat from Oregon. She and Congresswoman Jaime Herrera Beutler, a Republican from Washington are co-sponsors of a new bill, the Pregnant Workers Fairness Act, that would make it easier for women to get temporary accommodations during their pregnancies.

"It's good for the health of the economy, as women make up over half the workforce," said Herrera Beutler. She has some firsthand experience; she's had three babies while serving in Congress.

"We're asking for a reasonable accommodation, which is basically the exact same standard as the Americans With Disability Act," she said. "I think most people would assume that it is required to say, 'Yeah, okay, you can have an extra bathroom break here.' 'The policy is no water here, but you get to carry your water with you.' These are reasonable things. Most people would expect this already in the law, I would think."

But Congress has considered this bill with different sponsors before, for the past seven years. In October it finally got a hearing. But there's still a long road ahead.  As Rep. Jahana Hayes of Connecticut noted, "I don't think this is an equality issue; this is an equity issue, 'cause last time I checked, men couldn't get pregnant."

Since our interview, Sarah Coogle settled with the Department of Corrections. She's also joined a class action lawsuit to try to change the policy on accommodations for pregnant corrections officers in California … and she's pregnant again.

Indicating an empty crib, she said, "I look at this as hope. This is what I'm still fighting for. If there's a woman that was thinking about getting into law enforcement, I would at this point right now steer them away from the Department of Corrections because this is not a department for you, because they won't care. And if you don't want to accommodate me, accommodate the baby."

"If all of us make a voice, things can change," she said.

And Michelle Durham sued her former employer, ambulance service Rural/Metro, but a judge ruled in favor of the company, saying the state law does not require an employer to provide special accommodations to its pregnant employees. Her appeal will be heard this week.

After having her son, Aedan, in 2016, Durham is now working at a pet store. She feels her dreams of a medical career are dashed.

"I changed my whole life path with one decision," she said.

Crawford asked, "Is that a decision men have to make?"