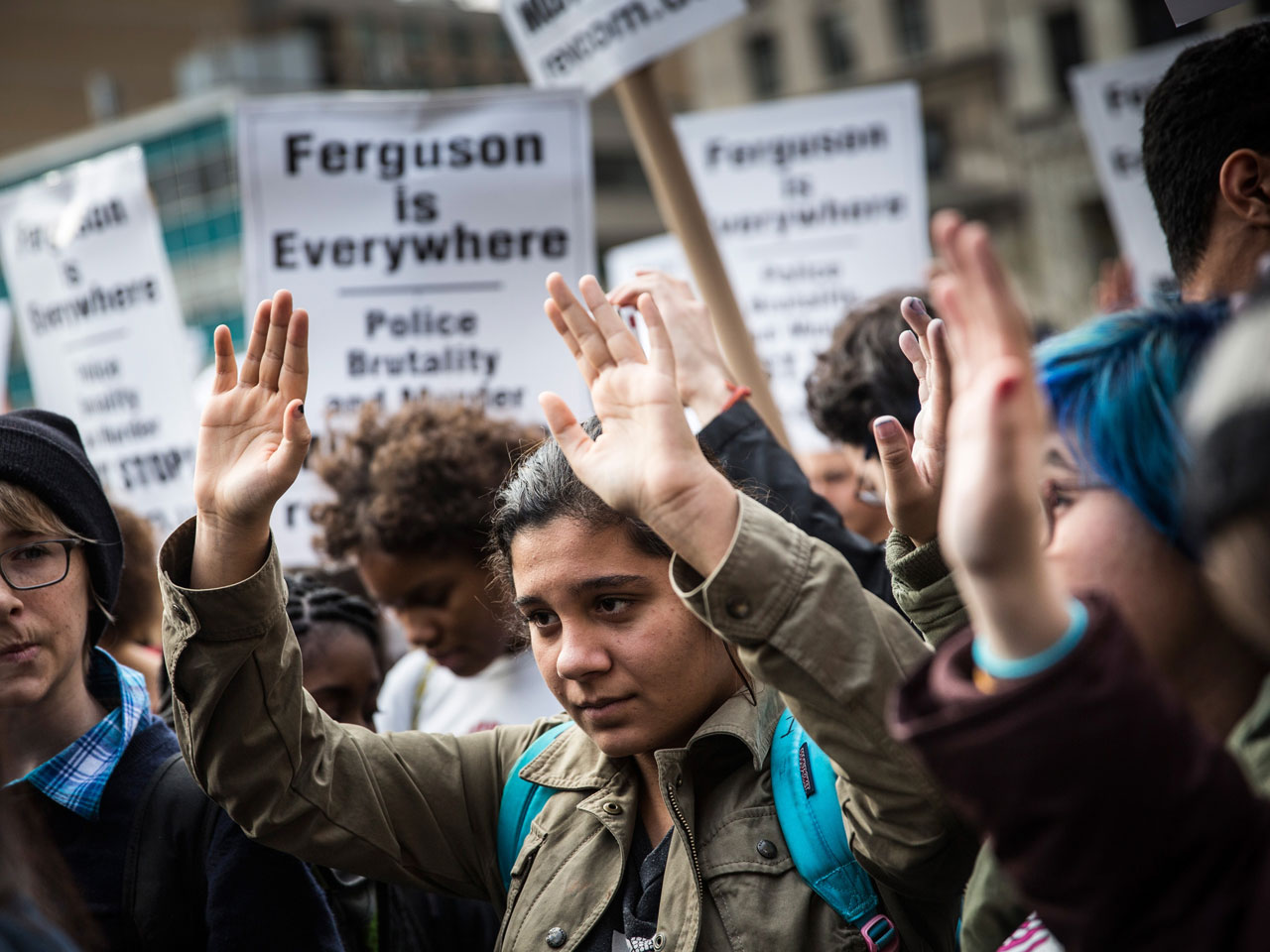 The pose has come to symbolize a movement, even though witnesses offered conflicting accounts of whether 18-year-old Michael Brown had his hands up in surrender when he was killed by Ferguson officer Darren Wilson in August.

The power of the symbol was evident again Monday. Protesters across the country walked off the job or away from class in support of the Ferguson protesters. Walkouts took place in New York, Chicago, San Francisco and elsewhere.

At the University of Missouri-St. Louis, not far from Ferguson, sophomore Amber Whitaker was among about 30 students who chanted "Hands up. Don't shoot!"

Whitaker, who is white, said the symbolism is what matters, not whether Brown literally had his hands in the air.

The exact circumstances surrounding Brown's death will forever be in dispute. Wilson, who is white, shot and killed Brown, who was black and unarmed, on Aug. 9. A grand jury's decision last week not to indict Wilson set off renewed protests, some of which turned violent.

Wilson told the grand jury that he shot Brown in self-defense. But several witnesses said Brown had his hands up in surrender. Within hours, "Hands Up. Don't Shoot!" became the rallying cry for protesters.

Witness accounts contained in thousands of pages of grand jury documents reviewed by The Associated Press showed many variations about whether Brown's hands were actually raised - and if so, how high.

Some people were offended by the hands-up gesture.

St. Louis Police Officers Association business manager Jeff Roorda said: "It is unthinkable that hometown athletes would so publicly perpetuate a narrative that has been disproven over and over again."

In an interview with CBS News, Roorda called the overall unrest over Ferguson "not a failure of law enforcement."

In Springfield, Missouri, Rodney Shetler, watched the players' action from his home. He said the move was "in pretty poor taste" and was divisive and disrespectful to law enforcement.

"It's a gesture proven by the grand jury not to be appropriate or accurate," said Shetler, the 44-year-old owner of a copying and printing business.

A similar episode unfolded more than four decades ago at the 1968 Olympics in Mexico City.

John Carlos, the American 200-meter bronze medalist, raised eyebrows on the medal stand when he and teammate Tommie Smith gave the black power salute. He stood by the Rams players.

"If they choose to come out and raise their hands in support of whatever their emotions are, they have the right to do that," Carlos told The Associated Press. "I don't think the whole story has been told about the Michael Brown tragedy, and the pros and cons on both sides. They can just go by their emotions. I don't think anyone got injured or shot by expressing emotions."

The White House on Monday announced the conclusion of a three-month review of the Ferguson situation. President Barack Obama wants more officers to wear cameras to promote trust, but he is not seeking to reduce federal programs that provide the type of military-style equipment used to dispel the unrest in Ferguson and elsewhere.

The Ferguson Commission appointed by Missouri Gov. Jay Nixon met Monday for the first time. The 16-person panel will study the underlying social and economic conditions - from failing schools to high unemployment- that have gained attention since Brown's death.