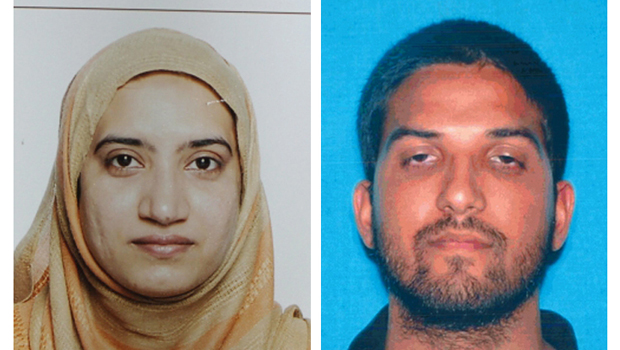 WASHINGTON -- A locked iPhone used by one of the San Bernardino killers likely holds evidence of the eventual attack, the Justice Department said in a court filing Thursday in its high-profile encryption dispute with Apple Inc., adding that the community and the public "need to know" what is on the device.

The government's filing is aimed at encouraging a federal magistrate judge to affirm her order from last month that directed Apple to help the FBI gain access to the phone used by Syed Farook, one of the two attackers in the December 2 shootings that killed 14 people.

The brief, which sets the stage for a March 22 hearing in Southern California, marks a further escalation of rhetoric between the federal government and the technology company.

"There is probable cause to believe there is evidence of a terrorist attack on that phone, and our legal system gives this Court the authority to see that it can be searched pursuant to a lawful warrant," the filing states.

At issue is a February 16 order directing Apple to create specialized software that can bypass auto-erase functions on the phone and enable the FBI to remotely access the phone. Apple has challenged the order as unlawful and in violation of its constitutional rights, but the Justice Department reiterated its argument that its request is only about one phone and that it will not be unduly burdensome for the company to comply.

"Under those specific circumstances, Apple can be compelled to give aid. That is not lawless tyranny. Rather, it is ordered liberty vindicating the rule of law," the department said.

In the court filing, the Justice Department also took issue with Apple's argument that if it assisted the U.S. government it would be pressured to help foreign powers such as China as well. The government claims Apple is complying with China's requests already: "According to Apple's own data, China demanded information from Apple regarding over 4K iPhones in the first half of 2015 and Apple complied 74% of the time."

The government asserts Apple has made accommodations like "moving Chinese user data to Chinese government servers and installing a different WiFi protocol for Chinese iPhones."

An Apple attorney disputed that there's anything improper about the company's dealings with China. "The company has never been asked by the Chinese government or any other government to build a backdoor. We will not permit backdoors," the attorney said.

The government's court filing also continues the back and forth over whether the FBI made a crucial error by resetting the password on Farook's iCloud account in the hours after the attack.

At a congressional hearing last week, FBI Director James Comey acknowledged it was a "mistake" that made it "impossible later to cause the phone to back up again to the iCloud."

Apple's general counsel Bruce Sewell, at the same hearing, said, "The very information that the FBI is seeking would have been available and we could have pulled it down from the cloud. But by changing the password -- this is different than the [phone's] passcode -- by changing the password, it was no longer possible for that phone to auto-backup."

However, Comey maintained that regardless of the iCloud password, the FBI still would have needed Apple's assistance to access everything off the iPhone.

In the brief filed Thursday, the government elaborates:

"For several reasons, a forced iCloud backup would not have been successful even if the password had remained unchanged. Farook's iPhone was found powered off. Subsequent testing has revealed that once powered off, an iPhone will not back itself up to an iCloud account unless and until it has been unlocked at least once by use of the passcode. Moreover, the evidence on Farook's iCloud account suggests that he had already changed his iCloud password himself on October 22, 2015 -- shortly after the last backup -- and that the auto-backup feature was disabled."