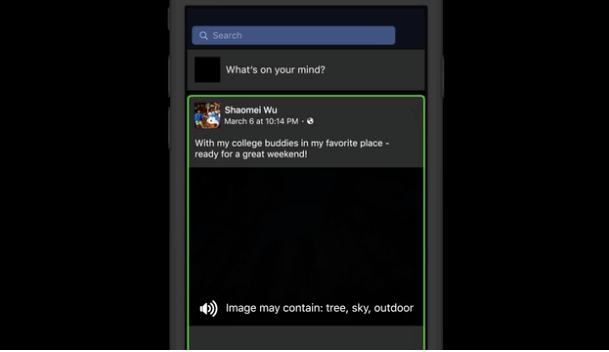 Facebook has found a new application for artificial intelligence -- creating a tool to describe photos to blind users. On Tuesday, Facebook announced automatic alternative text, a tool that generates a verbal description of an image on the site. Users who have screen readers on any iOS device will hear a list of items that might be contained in a given photo on Facebook, according to a blog post.

Before this new tool was announced, those who used screen readers would solely hear the names of the individual who shared the photo. After this, the user would hear the word "photo" when they came to a photo. Obviously, this did not offer a very comprehensive understanding of the very visual content shared on the popular social media site.

"Now we can offer a richer description of what's in a photo thanks to automatic alt text. For instance, someone could now hear, 'Image may contain three people, smiling, outdoors,' " reads the blog post.

So, what exactly is the artificial intelligence program that was developed? The site's object recognition technology is based on a neural network that contains billions of parameters and is trained with millions of examples of visual objects. The company's software developers and engineers work with the Facebook Accessibility team to make technology more accessible.

As of now, the feature is being introduced to iOS screen readers that are set to English. Facebook announced that it has plans to make the tool compatible with other languages in the near future.

"While this technology is still nascent, tapping its current capabilities to describe photos is an important step toward providing our visually impaired community the same benefits and enjoyment that everyone gets from photos," the company announced.