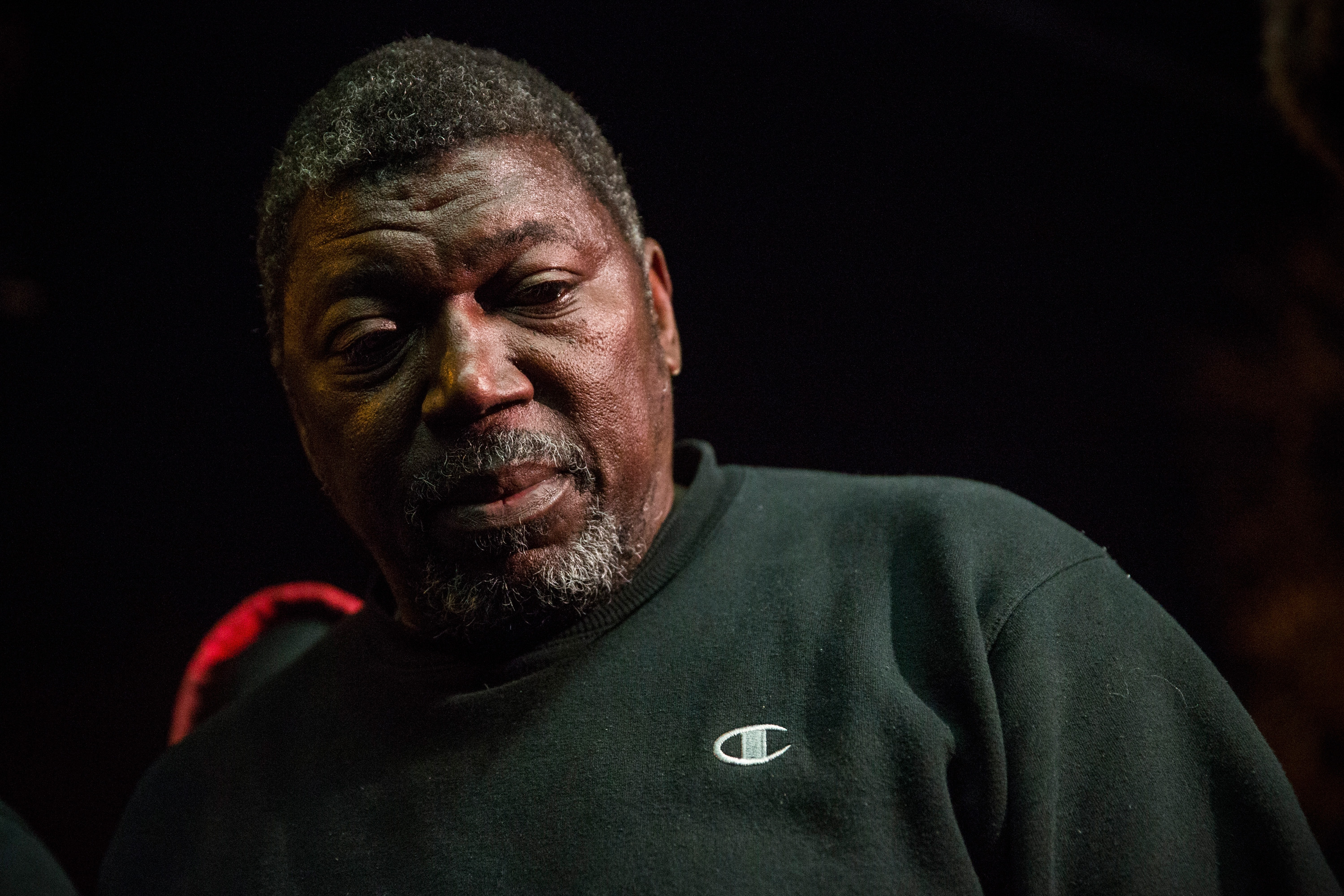 Garner's stepfather, Benjamin Carr, held yellow flowers at the site where Garner died and looked weary with grief. "We don't want no violence," he said. "It's not going to help nothing."

Carr said he was disappointed but not surprised by the grand jury's decision and hoped federal authorities could do more.

"It's just a license to kill a black man," he said, calling the justice system "not worth a damn."

"Somebody needs to pay," she said.

Earlier, Gardner said that the fight wasn't over and that she wouldn't accept Pantaleo's condolences.

"Who's going to play Santa Claus for my grandkids this year?" Garner asked.

Garner's mother, Gwen, said she was "truly disappointed" in the grand jury's ruling. Speaking to protesters, she said, "We want you to rally but rally in peace."

Thousands of protesters took to the streets of Manhattan and Staten Island in an emotional daylong protest of the grand jury's decision.

Demonstrators blocked traffic on the Brooklyn Bridge and West Side Highway and laid down in Grand Central Terminal. Some converged on the heavily secured area around the annual Rockefeller Center Christmas tree lighting. Police, some in riot gear, followed the groups as they roamed the city. Authorities said some arrests were made but did not have a number.

In the Staten Island neighborhood where Garner died, people reacted with angry disbelief and chanted, "I can't breathe!" and "Hands up - don't choke!"

In Times Square, a crowd of at least 200 people chanted, "No indictment is denial. We want a public trial." Meredith Reitman, a 40-year-old white woman from Queens, held a sign that said, "White silence white consent." She said the decision not to indict shocked her, even though some might think she was being naive to expect an indictment. "We should hope for justice and be surprised every time it doesn't happen," Reitman said.

Amanda Seales, a 33-year-old black marcher from Harlem, said activists needed to get off social media and into the streets. "For black people, this isn't new," she said. "And this cannot continue."

Obama said the New York grand jury's decision not to indict the officer in Garner's death underscores the need to strengthen the trust and accountability between communities and law enforcement.

He said police have to deal with crime every day but can do their jobs better if people have confidence in the law enforcement system.

"It is incumbent about all of us as Americans, regardless of race, region, faith, that we recognize this as an American problem and not just a black problem or a brown problem or a Native American problem," Obama said. "When anybody in this country is not being treated equally under the law, that's a problem. And it's my job as president to help solve it."

In the St. Louis suburb of Clayton, Missouri, about 200 people marched through the downtown business district to the suburban courthouse where the grand jury that declined to indict Ferguson Officer Darren Wilson in 18-year-old Michael Brown's death met for three months.

Garner's name was immediately invoked at the clergy-led rally, which had been planned before Wednesday's announcement in New York.

"Another no indictment!" shouted high school junior Janie McCowan, 17, as part of a call-and-response chant.

The crowd responded: "I can't breathe!"

Later, McCowan and four other young black women walked in a circle saying, "Am I next?" Then the protesters lay on the street in front of the courthouse, staging a die-in.

Cries of "Black lives matter" were heard at demonstrations in cities on both U.S. coasts.

In San Francisco, protesters conducted a die-in at one of the city's cable car stops. CBS station KPIX reports that about 150 people, many of them students at Stanford University, briefly blocked Highway 101 Wednesday night following the grand jury's decision.

In Philadelphia groups chanted "No justice, no Christmas!" and drowned out several performances at the city's tree lighting ceremony.

Marches and other protests also took place in Atlanta, St. Louis, Washington, D.C., most of them peaceful.

The Justice Department will conduct a federal investigation into Garner's chokehold death after a grand jury in New York City declined to indict the white police officer who applied the move, Attorney General Eric Holder said. Calling the death a "tragedy," Holder said it was one of "several recent incidents that have tested the sense of trust that must exist between law enforcement and the communities they are charged to serve and protect."