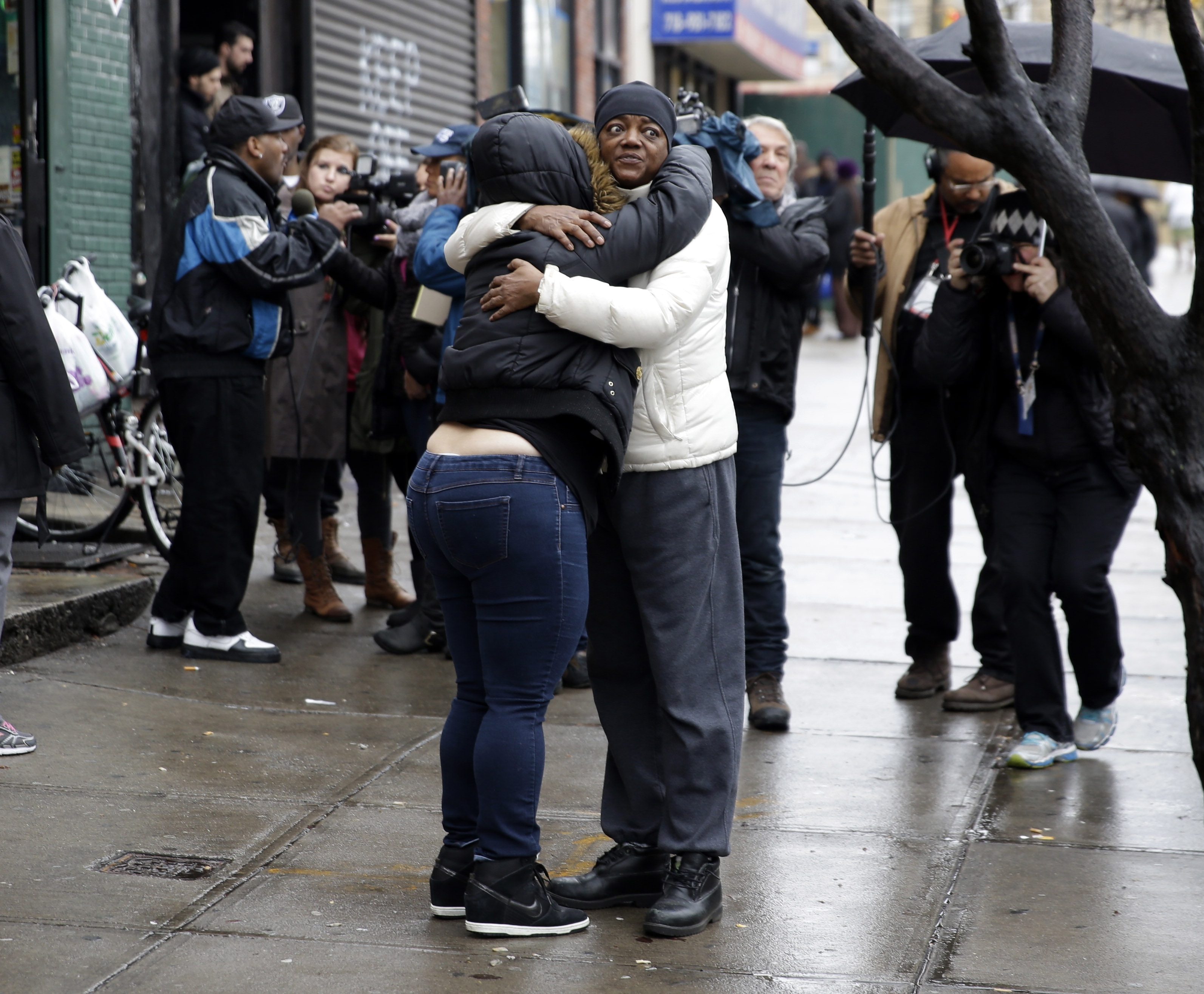 NEW YORK -- Reaction across the city was mixed Wednesday after a grand jury decided not to indict NYPD officer Daniel Pantaleo in the apparent chokehold death of Staten Island man Eric Garner.

Garner's stepfather, Benjamin Carr, held yellow flowers at the site where Garner died and looked weary with grief. Asked whether he had a message to send to the public about the decision, Carr said, "No violence."

"We don't want no violence," he said. "It's not going to help nothing."

Carr said he was disappointed but not surprised by the grand jury's decision and hoped federal authorities could do more.

"It's just a license to kill a black man," he said, calling the justice system "not worth a damn."

"It's a very painful day for so many New Yorkers," the mayor said. "That is the core reality. So many people in this city are feeling pain right now, and we're grieving, again, over the loss of Eric Garner, who was a father, a husband, a son, a good man, a man who should be with us and isn't."

President Barack Obama said the Garner case "speaks to the larger issues that we've been talking about now for the last week, the last month, the last year and, sadly, for decades, and that is the concern on the part of too many minority communities that law enforcement is not working with them and dealing with them in a fair way."

Earlier this week, Obama announced he would form a task force aimed at strengthening the relationship between police and minority communities.

"I'm not interested in talk; I'm interested in action," the president added. "I am absolutely committed as president of the United States to making sure that we have a country in which everyone believes in the core principle that we are equal under the law."

Protesters gathered in several parts of New York City after the announcement, including dozens who held a "die-in" at Grand Central Terminal and several hundred who gathered near the tree-lightening ceremony at Rockefeller Center.

A video shot by an onlooker on July 17 and widely viewed on the Internet showed the 43-year-old Garner telling a group of police officers to leave him alone as they tried to arrest him.

Pantaleo responded by wrapping his arm around Garner's neck in an apparent chokehold, which is banned under NYPD policy. The heavyset Garner, who had asthma, was heard repeatedly gasping, "I can't breathe!" A second video surfaced that showed police and paramedics appearing to make no effort to revive Garner while he lay motionless on the ground. He later died at a hospital.

"I am actually astonished based on the evidence of the video tape, and the medical examiner, that this grand jury at this time wouldn't indict for anything, is really just astonishing," Jonathon Moore, an attorney for the Garner family, said.

"I first want to express my condolences to Eric Garner's family for their loss, and to acknowledge the heartache of his mother, his wife, his children, as well as his other family members, loved ones, and friends, who have consistently carried themselves with grace during the past four months," Richmond County District Attorney Daniel M. Donovan said in a statement, CBS New York reported.

Officer Pantaleo also released a statement Wednesday, saying: "I became a police officer to help people and to protect those who can't protect themselves. It is never my intention to harm anyone and I feel very bad about the death of Mr. Garner. My family and I include him and his family in our prayers and I hope that they will accept my personal condolences for their loss."

"He's a 29-year-old young individual, young adult who was really just doing his job that day and is very remorseful for the loss of a life but he was certainly relieved and very emotional when I told him what the results of the grand jury were," Pantaleo's attorney, Stu London, told CBS Radio station 1010 WINS.

"Some folks here on Staten Island -- our island, our home -- will agree with the results, and many will not," he said in a statement. "In this matter, the Garner family, the NYPD and the office of the Borough President speak with one voice when we say that disagreeing with the conclusion of the grand jury is your absolute right, and so is peacefully protesting the result and advocating for change."

Sen. Kirsten Gillibrand said she was shocked by the decision.

"The death of Eric Garner is a tragedy that demands accountability. Nobody unarmed should die on a New York City street corner for suspected low-level offenses," Gillibrand said in a statement.

Patrick Lynch, president of Patrolmen's Benevolent Association, released a statement after the panel's decision was revealed, saying: "While we are pleased with the Grand Jury's decision, there are no winners here today. There was a loss of life that both a family and a police officer will always have to live with. It is clear that the officer's intention was to do nothing more than take Mr. Garner into custody as instructed and that he used the take down technique that he learned in the academy when Mr. Garner refused. No police officer starts a shift intending to take another human being's life and we are all saddened by this tragedy."

Candace McCoy, a criminal justice professor at the CUNY Graduate Center, told CBSN it is challenging to pull together enough evidence "to show probable cause on what is a very serious charge of manslaughter."

"You still have to show an intent," she said. "And this is very difficult."

Councilman Rory Lancman spoke with WCBS 880, saying he was very surprised by the decision.

"We saw a video of an officer performing a prohibited chokehold, a chokehold that is prohibited by NYPD policy and has been for a couple of decades now," he said.

Lancman said with the video of the incident, paired with the coroner's report saying the chokehold was a substantial factor in his death, he is surprised that Pantaleo was not indicted for either second degree manslaughter or criminally negligent homicide.

"I just don't see how you put the video together, you put the coroner's report together, and you don't get one of those two charges, at least as a charge to go to a trial and have a jury ultimately decide guilty or innocence," he said.

"We had video footage taken at the time of the killing showing the officer in question applying the chokehold," he said. "We know from the medical examiner that the chokehold caused Mr. Garner's death. And once again, as we heard unfortunately last weekend in Ferguson, Missouri, we have no accountability, no prosecution of an officer who unjustifiably took a civilian's life."