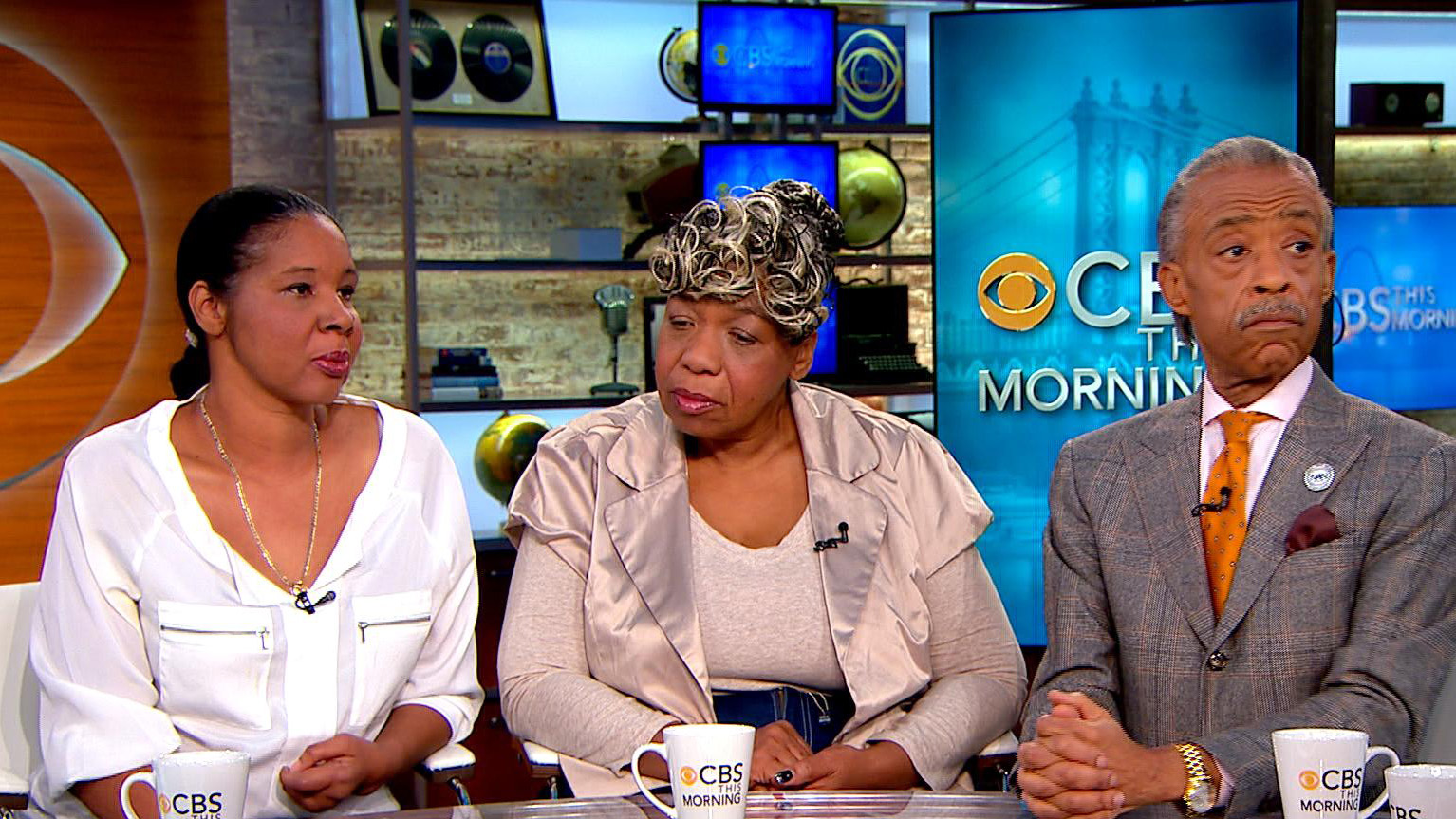 The widow of Eric Garner, who died after he was put into a chokehold by a New York police officer, appeared on "CBS This Morning" Thursday, a day after a grand jury declined to bring criminal charges against the officer.

A video detailing the entire incident has been shared across the Internet, a video many believed would certainly be enough to charge officer Daniel Pantaleo. Instead, outrage has spread across the country over the grand jury's decision not to charge him.

"They wasn't looking at the same [video] we was," Garner said.

In the video, the officer apparently put Garner in a chokehold, and Garner repeatedly told officers he couldn't breathe.

His widow told the co-hosts, "It's been really hard since July 17. I'm just trying to, you know, make sure his death is not in vain."

She said she is appreciative of the protesters showing support for her husband.

"Had it not been for the tape, for the people, for Reverend Al (Sharpton) putting it out there, he would have been just another black man killed and it would have been over," Garner said. "Nobody would remember his name. This way his name will be remembered. My grandchildren, they'll know who their grandpa was."

Garner's mother is also struggling with the idea of how the color of her son's skin played a role in his death. She believes race and police brutality were factors.

"They seem to use more excessive force on men, young men of color, than that they do on the white boys and young men," Garner's mother Gwen Carr said. "And usually when there's some fatality or some heinous death by the police hands, it's using our boys of color."

While his family may not see justice served, Americans are calling for action. After the grand jury in Ferguson chose not to indict officer Wilson in the shooting death of Michael Brown, Sharpton said people have become more aware of the role of a grand jury.

"I am are very proud to see Americans of all races and ages, saying wait a minute now, a grand jury is not supposed to say whether someone is innocent or guilty, a grand jury says, 'is there probable cause to go to trial?'" Sharpton said. "That tape says everybody, let's go to trial and see what happens. So for the grand jury to look at the take and say let's not even go to trial, that's hard for people to swallow."

Controversy has also surrounded the officer's use of a chokehold. While the police maneuver has been banned since 1993, Sharpton noted police haven't been following that rule.

"Well it's apparently been used a lot according to some of the data we've seen," Sharpton said. "Commissioner Bratton has been critical saying, it appears like chokehold to me, but the officer said no, it was some martial art maneuver."

That's exactly why he said there is certainly cause for a trial against officer Pantaleo.

"Most cops are not bad, but those that are, we should have a process... that protects good cops and good citizens," he said. "And I think with this tape, unlike other cases, people can say let's unite and see where there's structural change, not just outrage and anger."

And while there has been outpouring for Garner and his family, his wife doesn't believe she'll be able to forgive officer Pantaleo.

"Can I be honest? No, because he's gone," Garner said. "Maybe if he would have been tased, and maybe disarmed, not disarmed, say, incapacitated in some way, and still lived in the hospital, maybe a little slower now because the oxygen was cut off to his brain for a few minutes, but if he was here, maybe then I could accept his apology, but now he's gone and I'll never have my husband again."

Sharpton assured some action can still be taken against the officer, citing Attorney General Eric Holder's promise that the federal government will investigate the case. Garner's mother says justice will only be served for her son when there is accountability.

"Justice is where everyone who was involved in my son's death that day stands accountable, and then I'll feel like I was justified," she said. "That was so inhumane what they did to my son and her husband. I mean, no mother, no grandmother should have to ever go through the pain that we went through. It's just horrible."