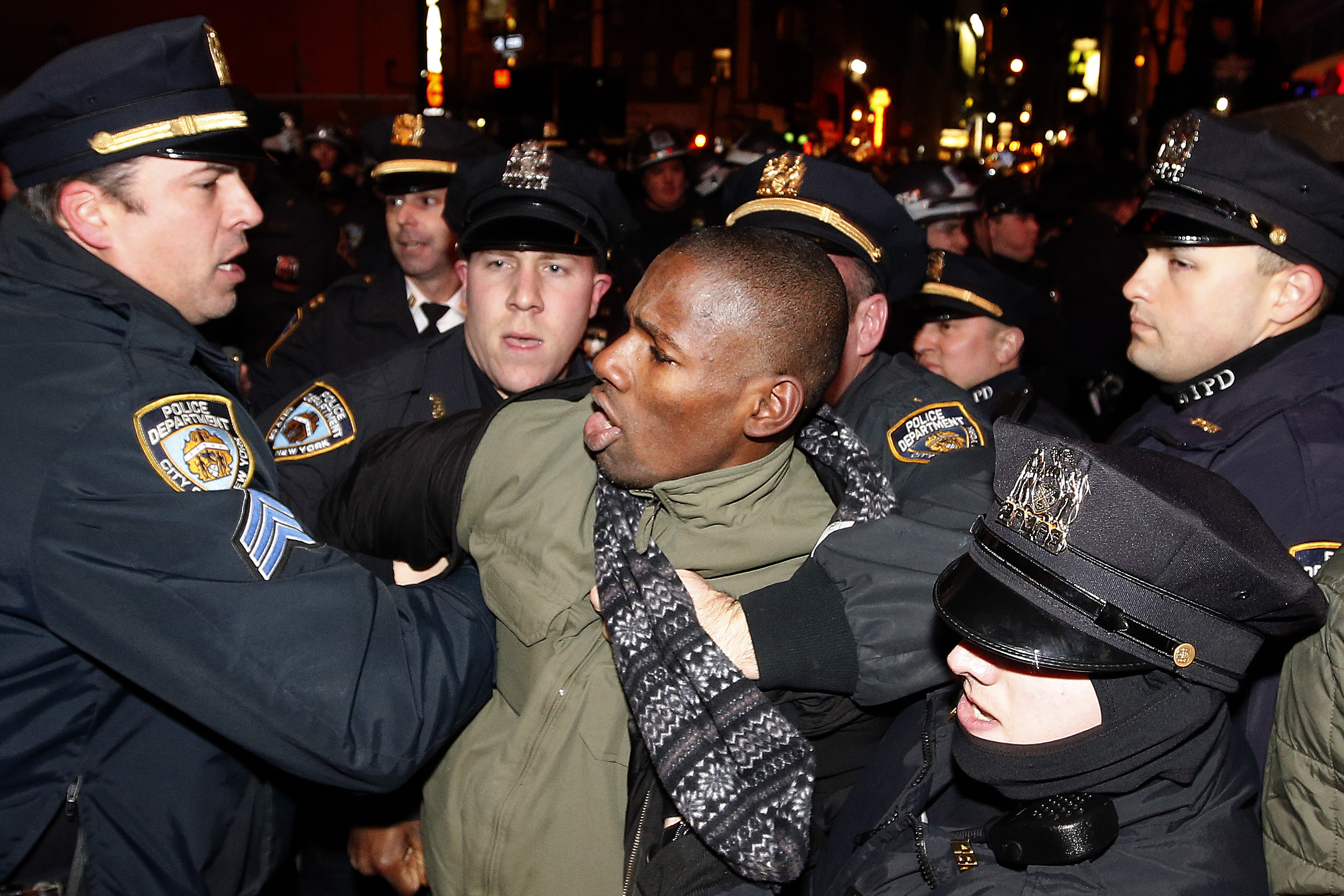 NEW YORK -- Gov. Andrew Cuomo says a "long string of events" involving the deaths of black men at the hands of police, not just the Eric Garner case in New York City, threaten to erode the belief many Americans have in the nation's criminal justice system.

Cuomo, speaking on NBC's "Today," said the death of Michael Brown in Ferguson, Missouri, and similar previous cases in New York City show that it's necessary to "pull back the lens to understand it's not just about Eric Garner."

The governor said if people don't feel they're fairly represented by the justice system, "you have a fundamental problem."

Cuomo spoke after thousands and thousands of diverse people united by anger took to the streets from New York City to San Francisco for a second straight night to protest a grand jury clearing a white police officer in the chokehold death of Garner, an unarmed black man.

Grandparents marched with their grandchildren. Experienced activists stood alongside newcomers, and protesters of all colors chanted slogans.

"We're under siege and it has to stop," Harlem resident Judy Edwards said at a rally Thursday night in lower Manhattan's Foley Square.

The 61-year-old black woman was accompanied by her daughter and twin 10-year-old grandchildren, a boy and a girl. She said it was important to her that the children saw a crowd that was racially mixed and diverse in many other ways all insisting upon the same thing - that something must be done.

That was the message, too, in cities across America: Atlanta, Boston, Chicago, Denver, Detroit, Minneapolis Oakland, San Francisco and Washington, D.C., among them. Sign-carrying, chanting demonstrators marched down heavily-traveled streets and shut down highways and bridges. Politicians talked about the need for better police training, body cameras and changes in the grand jury process to restore faith in the legal system.

CBS New York reports that protesters are expected to rally for a third day Friday. Demonstrators are expected to gather in Union Square Friday afternoon, a day after an estimated 10,000 people marched across New York City on Thursday.

While the protests were large and more than 200 arrests were made by NYPD officers, they were mostly peaceful -- nothing like the rioting in Ferguson, Missouri last week. It was preparation and experience that made a difference, CBS News' Michelle Miller reported.

"Demonstrators were not intent on using violence, and the police were certainly intent on giving them room to demonstrate, if you will," New York Police Commissioner Bill Bratton said. "I think one of the things we benefit from is that we have so many different demonstrations. I have 150 events on average every week in the city."

In New York, Mayor Bill de Blasio - blasted by police union leaders who accused him of not supporting his officers - outlined previously announced plans to teach officers how to communicate better with people on the street.

President Barack Obama also weighed in, saying one of the chief issues at stake is "making sure that people have confidence that police and law enforcement and prosecutors are serving everybody equally."

But U.S. Rep. Peter King, R-N.Y., told The Associated Press: "The black community is not right to be upset about the ruling. If this were a white person it would have been the same thing."

Tensions already were high after a grand jury last week cleared an officer in the shooting death Brown. Then on Wednesday came the decision that Officer Daniel Pantaleo would not be indicted in the chokehold death of Garner. In both cases the officers were white and the victims were black.

New York demonstrators targeted the city's major traffic arteries again on Thursday. They gathered near the Holland Tunnel, the Manhattan Bridge and on the Westside Highway, temporarily shutting them down. One group converged on the Staten Island Ferry Terminal.

New Orleans residents held a die-in at a holiday light show and police moved in to separate them from spectators, some of whom yelled at the demonstrators.

In Chicago, hundreds of protesters blocked Lake Shore Drive. The protesters were thwarted in their efforts to march to Soldier Field, where the Chicago Bears and the Dallas Cowboys were playing.

In San Francisco, protesters blocked Market Street, at one point lying down en masse, causing gridlock until police spurred them to move to Union Square. In Oakland, several dozen protesters walked the streets shouting "No justice! No peace! Jail the racist police!"

In Arizona, about 150 people took part in the march through the streets of downtown Phoenix protesting the deadly shooting of a black, unarmed drug suspect by a white Phoenix police officer who mistook a pill bottle for a gun. The crowd called for an end to what they say is a nationwide epidemic of police brutality.

In Washington, protesters gathered in front of the Justice Department and marched close to the Ellipse where holiday revelers - including the president and his family - celebrated the lighting of the national Christmas tree. A second march went from the district's police headquarters to city hall, where former D.C. Mayor Marion Barry's remains are lying in repose.

At a news conference in New York on Thursday after a night of protests led to 83 arrests, the Rev. Al Sharpton called the state-level grand jury system "broken" when it comes to police brutality cases and urged federal authorities to fix it.

"The federal government must do in the 21st century what it did in the mid-20th century," he said. "Federal intervention must come now and protect people from state grand juries."

But Stuart London, Pantaleo's attorney, expressed confidence Thursday that his client won't face federal prosecution. "There's very specific guidelines that are not met in this case," London said. "This is a regular street encounter. It doesn't fall into the parameters."